WTC South Tower powered down for 36 hours just days before attack, security deactivated on floors 50 and up, many suspicious workers seen coming and going during blackout » Intellihub. RockCreekFreePress Articles. Confessions Of A 911 Hitman. 2012 New Evidence of Demolition Flashes and Explosions 9/11 Inside Job. ActiveThermitic_Harrit_Bentham2009. Demolition Access To The WTC Towers: Part Two - Security. Who could have placed explosives in the World Trade Center (WTC) towers? 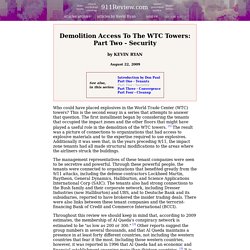 This is the second essay in a series that attempts to answer that question. Review of 'A New Standard For Deception' A Presentation by Kevin Ryan. By Jim Hoffman Version 1 10/15/06 Introduction In an information-packed presentation of 58 minutes Kevin Ryan delivers a damning indictment of the official investigations of the total collapses of the Twin Towers and Building 7. 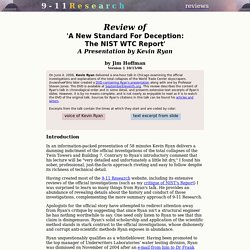 Contrary to Ryan's introductory comment that his lecture will be "very detailed and unfortunately a little bit dry," I found his sober, professional, just-the-facts approach riveting and easy to follow despite its richness of technical detail. Demolition Access to the WTC Towers: Part One - Tenants. Note: The author is indebted to a few particularly useful sources of information and inspiration, including Russ Baker's book "Family of Secrets", the websites nndb.com, sourcewatch.org and secinfo.com, and Richard Gage. 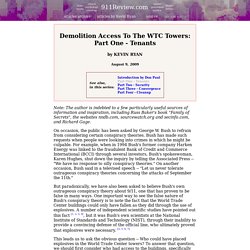 On occasion, the public has been asked by George W. Bush to refrain from considering certain conspiracy theories. Bush has made such requests when people were looking into crimes in which he might be culpable. For example, when in 1994 Bush's former company Harken Energy was linked to the fraudulent Bank of Credit and Commerce International (BCCI) through several investors, Bush's spokeswoman, Karen Hughes, shut down the inquiry by telling the Associated Press -- "We have no response to silly conspiracy theories. " Demolition Access to the WTC Towers: Part One - Tenants.

The Top Ten Connections Between NIST and Nano-Thermites. "Was the steel tested for explosives or thermite residues? 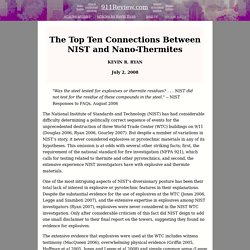 . . . NIST did not test for the residue of these compounds in the steel. " -- NIST Responses to FAQs, August 2006 The National Institute of Standards and Technology (NIST) has had considerable difficulty determining a politically correct sequence of events for the unprecedented destruction of three World Trade Center (WTC) buildings on 9/11 (Douglas 2006, Ryan 2006, Gourley 2007). WTC Demolition Participant Murdered? By Kevin Barrett, Veterans Today Editor Was Michael Calabrese murdered to prevent him from talking about his participation in the controlled demolition of the World Trade Center Towers and Building 7? 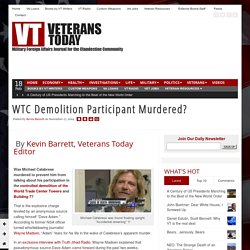 That is the explosive charge leveled by an anonymous source calling himself “Dave Adam.” According to former NSA officer turned whistleblowing journalist Wayne Madsen, “Adam” fears for his life in the wake of Calabrese’s apparent murder. In an exclusive interview with Truth Jihad Radio, Wayne Madsen explained that pseudonymous source Dave Adam came forward during the past two weeks, apparently first contacting Architects and Engineers for 9/11 Truth and then Madsen. Dr. Ronald Culbreth: CIA involved with explosives found on 9/11 - GovernmentSecrets.com. Although the Western media attempts to dismiss all talk of a concerted effort and inside plan, involving the events of 9/11 and everything that we have seen since then, the scientific evidence and the facts themselves, as well as all of the events that have occurred since September 11, 2001, point to something much more sinister and evil than most people are willing to accept. 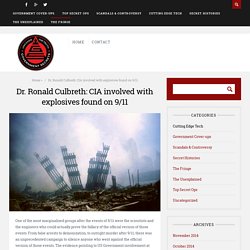 It is the outright horrific nature of what has been occurring since 9/11 that forces normal civilized people to shake their head in disbelief in attempt to deny that such a plot is possible. Professor Ronald Culbreth, a scientist who had access to secret data at Lawrence Livermore Labs, concerning explosives and nano-thermite, and other such projects, witnessed the CIA involvement with powerful high-tech explosives which have been proven to have been used on the buildings of the World Trade Center on September 11, 2001.

Mr. The Most Complete Chronology Of 9-11 False Flag Evidence Ever Presented (Must See Video) (Before It's News) (N.Morgan) The 9/11 attack on the World Trade Center left our country in a place of confusion, fear, and anger. 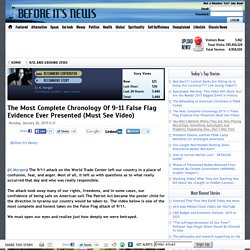 Most of all, it left us with questions as to what really occurred that day and who was really responsible. The attack took away many of our rights, freedoms, and in some cases, our confidence of being safe on American soil.The Patriot Act became the poster child for the direction in tyranny our country would be taken to. 9/11/01: Did Israeli Men Attempt To Detonate Explosives on the George Washington Bridge? - GovernmentSecrets.com. By John Greenewald, Jr. 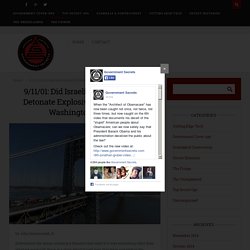 Entwined in the many conspiracy theories that state 9/11 was something other than what we were told, there is a story about Israeli men that were arrested on the George Washington Bridge, who had a van full of explosives and were going to detonate. Shortly after the story broke, it disappeared. Some news agencies issued a retraction, while others never mentioned it again. CIA Insider Tells 911 truth. Time to re-examine your World-view, America! Sept 11 Special - Urban Moving Systems - Spyring? Recon? or part of the Demolitions?

Note: When surfing to this blog, some viewers are encountering some sort of "dangerous site" message. 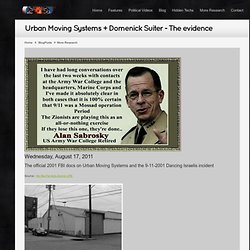 My computer has been checked for malware and is clean - Blogger.com (this site's host) is not known for being a "malware threat" so apparently the "Sayanim machine" has been hard at work trying to keep this information quiet - their efforts a little too late because thousands have already seen it. If you have any issues with this, please let me know in the comments area. Above: A snippet from the 2001 FBI files on Urban Moving Systems and the 9-11 Dancing Israelis incident.

Ask a guy who helped plant explosives in the WTC a week before 9/11 anything. Pre-planted explosives, pre-planted witnesses, pre-planted experts, pre-planted myths. Frequently Asked Questions: Controlled Demolition. EXPLOSIVES PUT IN WTC CONCRETE WHEN CONSTRUCTED-2. The above figure would in actuality have been greatly reduced because there would have been other losses of calcium oxide. 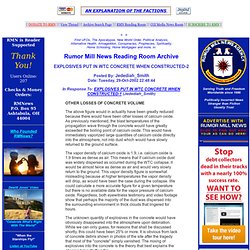