NPR Choice page. 15 DIY Uses For Borax — Detox, Remove Fluoride From Water, Kill Mycoplasma And Pathogens, And More. (Before It's News) Borax is an important member of the group of 109 elements that make up our universe. 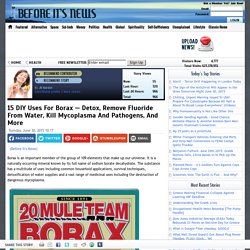 It is a naturally occurring mineral known by its full name of sodium borate decahydrate. The substance has a multitude of uses including common household applications, survival techniques, detoxification of water supplies and a vast range of medicinal uses including the destruction of dangerous mycoplasma. Borax is found everywhere including food, plants, water, soil and even the human body. Borax occurs after the repeated evaporation of saline lakes and can be found in Turkey, Tibet, Chile, Romania and America. Household Uses Pesticide. 12 plants that repel unwanted insects. Are you an insect magnet? 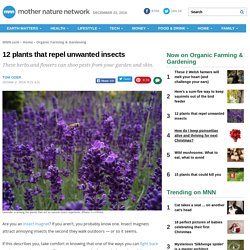 If you aren’t, you probably know one. Insect magnets attract annoying insects the second they walk outdoors — or so it seems. If this describes you, take comfort in knowing that one of the ways you can fight back against mosquitoes, gnats, flies, no-see-ums and other pesky bugs doesn’t have to involve covering yourself with a sticky spray or engaging in chemical warfare. To help you enjoy going outdoors, try strategically placing insect-repelling plants in your garden or on your patio. Essential oils in these plants act as nature’s bug repellent. But know that simply including insect-repelling plants in your landscape will not in itself ensure your garden is insect free. “There’s not enough research in this area to support that,” says Dr. There may be fewer insects, but no one’s done the research into how many plants, planted how close together, would be effective in repelling insects to any great extent, says Pennisi. Natural Weed Control For A Healthy Garden. (Before It's News) The more we learn about herbicides and pesticides, the more we realize that they’re REALLY bad for both us and the environment. 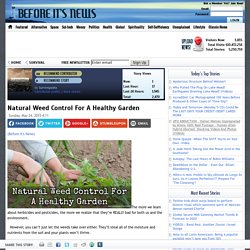 However, you can’t just let the weeds take over either. They’ll steal all of the moisture and nutrients from the soil and your plants won’t thrive. What’s the alternative, though? Is there such a thing as natural weed control for your garden? Pull Them Yeah, I know. Don’t just leave the weeds laying there though; they may have seeds that will fall out and quadruple your problem. For weeds that are hard to pull, use a hand garden spade or a screwdriver to dig down in and loosen the soil. Newspaper, Mulch or Biodegradable Film or Fabric If you want to keep your garden weed-free, lining it with newspaper, mulch or biodegradable film or fabric is the way to go for nearly maintenance-free weed control. New US Patents Could Signal The End Of Pesticides & GMOs.

Humanity is facing a a major crisis: our immediate environment is being riddled with pesticides, making us unhealthy faster than we can study the effects. 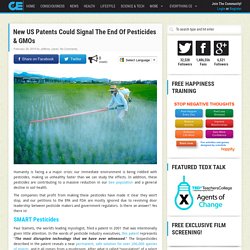 In addition, these pesticides are contributing to a massive reduction in our bee population and a general decline in soil health. The companies that profit from making these pesticides have made it clear they won’t stop, and our petitions to the EPA and FDA are mostly ignored due to revolving door leadership between pesticide makers and government regulators. 10 Easy Monsanto-Free Tips to Get Rid of Weeds. Christina Sarich | Naturalsociety With the invasion of unstoppable superweeds, primarily fueled through the use of Monsanto’s RoundUp herbicide and other pesticides, it is becoming more important than ever to discover and utilize alternatives for weed-destruction. 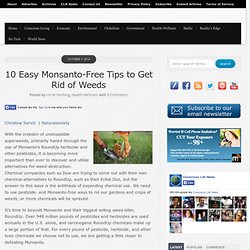 Chemical companies such as Dow are trying to come out with their own chemical-alternatives to RoundUp, such as their Enlist Duo, but the answer to this issue is the antithesis of expanding chemical use. We need to use pesticide- and Monsanto-free ways to rid our gardens and crops of weeds, or more chemicals will be sprayed. It’s time to boycott Monsanto and their biggest selling weed killer, RoundUp. Over 948 million pounds of pesticides and herbicides are used annually in the U.S. alone, and carcinogenic RoundUp chemicals make up a large portion of that. Here are 10 easy ways to boycott Monsanto’s RoundUp chemicals and fight weeds in a sustainable way: 1. More from Naturalsociety. Extensive List of Organic Pest Control Remedies. Wiki Image List compiled by Australian Organic GardeningWake Up World You can make your own organic bug spray from kitchen leftovers! 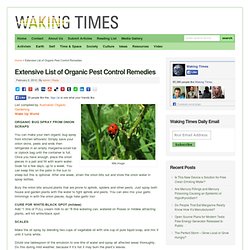 Simply save your onion skins, peels and ends then refrigerate in an empty margarine-sized tub or ziplock bag until the container is full. Once you have enough, place the onion pieces in a pail and fill with warm water. Soak for a few days, up to a week. Bury the onion bits around plants that are prone to aphids, spiders and other pests. CURE FOR WHITE/BLACK SPOT (mildew) Add *1 litre of FULL cream milk to an *8 litre watering can, watered on Roses or mildew attracting plants, will kill white/black spot Make the oil spray by blending two cups of vegetable oil with one cup of pure liquid soap, and mix it until it turns white. Dilute one tablespoon of the emulsion to one litre of water and spray all affected areas thoroughly. Scales shoot a sweet substance called honeydew. If you only have a small amount of scale, scrape it off with a fingernail or toothbrush.