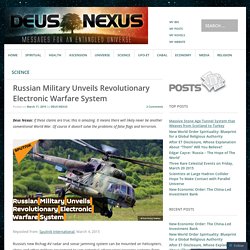 It means there will likely never be another conventional World War. Of course it doesn’t solve the problems of false flags and terrorism. Russia’s new Richag-AV radar and sonar jamming system can be mounted on helicopters, ships and other military equipment to jam potential adversaries’ weapons systems from distances of several hundred kilometers away; it has been hailed by developers as having no analogue anywhere in the world. At a presentation for journalists in Kazan on Wednesday, Russian radio-electronics firm Radio-Electronic Technologies Concern (KRET) announced that it is handing over the first batch of a new helicopter-mounted electronic warfare system known as the ‘Richag-AV’ to the armed forces. The Richag-AV system, mounted on the Mi-8MTPR1 (a variant of the Mi-8MTB5-1 helicopter) is said to have no global equivalent. KRET is Russia’s largest radio-electronic industrial holding; it was created in 2009. Photo: RIA Novosti. 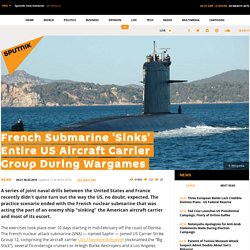 The French nuclear attack submarine (SNA) — named Saphir — joined US Carrier Strike Group 12, comprising the aircraft carrier USS Theodore Roosevelt (nicknamed the "Big Stick"), several Ticonderoga cruisers or Arleigh Burke destroyers and a Los Angeles class nuclear attack submarine. The exercises were meant to test the newly upgraded carrier, which had undergone a four year, $2.6 billion overhaul, ahead of the Strike Group's deployment. “We are going to experience real combat situations from all angles, there will be training evaluations from a hostile ship boarding, submarine attacks, and enemy ships or vessels trying impede their justice upon our strike group,” said Capt. Better Friend Than Foe However, the second phase of the exercises found the French ship playing on the enemy side, charged with a mission to find and attack the Theodore Roosevelt. 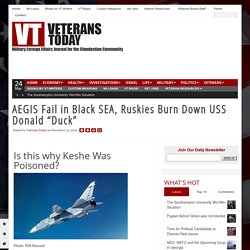 The purpose was a demonstration of force and intimidation in connection with the position of Russia in Ukraine and Crimea. The appearance of American warships in these waters is in contradiction of the Montreux Convention about the nature and duration of stay in the Black Sea by the military ships of countries not washed by this sea. In response, Russia sent an unarmed bomber Su- 24 to fly around the U.S. destroyer.

However, experts say that this plane was equipped with the latest Russian electronic warfare complex. According to this version, “Aegis” spotted from afar the approaching aircraft, and sounded alarm. Apparently, all efforts to revive the “Aegis” and provide target information for the defence failed. The demonstration was original enough. After the incident, the foreign media reported that “Donald Cook” was rushed into a port in Romania. Terrified US Aircraft Carrier Flees From Russian Subs To UK Safety.