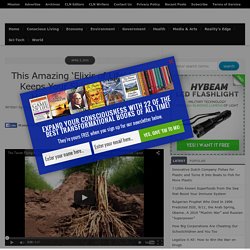 It has long been revered by Tibetan Monks as an elixir of life and a potent herbal tonic for the skin, lungs and heart. Dried Wild Asparagus Root Keep in mind that wild asparagus root isn’t just your run of the mill asparagus that you grow in your vegetable garden or buy at your local grocery store. It’s actually a wild type of asparagus. Here are my Top 3 Health Benefits for Wild Asparagus Root: PhytoCort 120 Vegetarian Capsules. Asthma and Herbs. Notes on the Herbal Treatment of Asthma Dr. 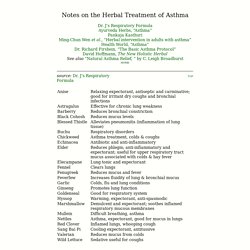 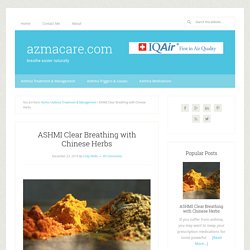 Specifically, ASHMI asthma treatment. ASHMI stands for Anti-Asthma Herbal Medicine Intervention. ASHMI is a combination of three Chinese herbal extracts: Lingzhi Mushroom (aka Reishi Mushroom), Kushen (aka Sophora Root), and Licorice Root (aka Gancao). ASHMI does not include Ma Huang, which is used globally as an asthma herbal remedy. The original formulation of ASHMI was developed by Dr. My wife and I became interested in ASHMI after reading a study published in the Journal of Allergy and Clinical Immunology (vol. 116, issue 3) and from an article I found on Medscape.com titled: “AAAAI 2009: Chinese Herbal Preparations Show Efficacy Against Asthma, Atopy.” 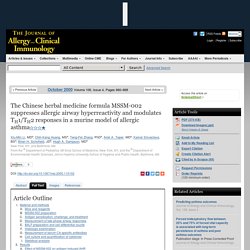 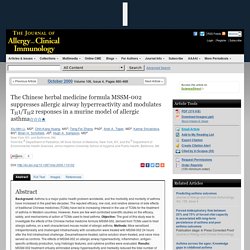 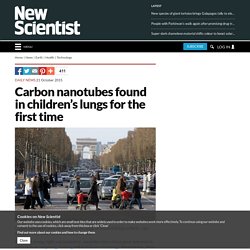 Incredibly strong, light and conductive, nanotubes have shown great potential in areas such as computing, clothing and healthcare technology. Nevertheless, there has been some concern over their use after mouse studies showed that injected nanotubes can cause immune reactions similar to those produced by asbestos. Sophora Root (ku shen) What is sophora? 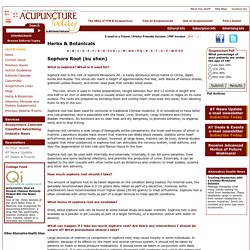 What is it used for? Sophora root is the root of sophora flavescens Ait., a hardy deciduous shrub native to China, Japan, Korea and Russia. Sophora Flavescens Root (Ku Shen) Though literally translated as bitter ginseng in English, Ku Shen has nothing to do with ginseng at all. 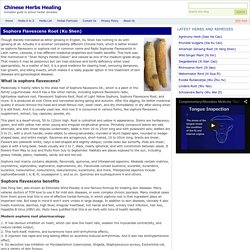 Gardenia: Key Herb for Dispelling Dampness and Heat Via the Triple Burner. Return to itm online. 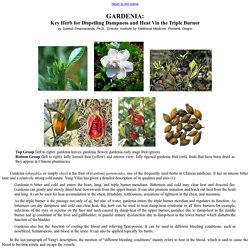 Sophora. Return to ITM Online by Subhuti Dharmananda, Ph.D., Director, Institute for Traditional Medicine, Portland, Oregon Of all the different sophora species and plant parts used in Chinese medicine, Sophora flavescens roots are by far the most frequently used, which is why the common name “sophora” is appropriately selected to represent it. 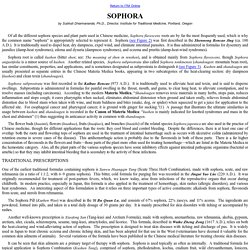 Sophora (see Figure 2) was first described in the Shennong Bencao Jing (ca. 100 A.D.). It is traditionally used to dispel heat, dry dampness, expel wind, and eliminate intestinal parasites. Sophora. Sophora Flavescens Root (Ku Shen) 7 Plants & Herbs That Heal Respiratory Infections & Soothe The Lungs. Hippocrates, the ancient Greek physician, was right when he pronounced, “Let food be thy medicine and medicine be thy food.” This has been confirmed by decades of research showing the healing power of food, as well as, inversely, its potential to cause some serious health problems. So many diseases, as well as the exponential rise in chronic disease in recent decades, can be linked to our eating habits today. We live in a world full of pesticides, antibiotic-laced meats, and processed foods that are manufactured to be addicting.

15 Plants and Herbs That Can Boost Lung Health, Heal Respiratory Infections And Even Repair Pulmonary Damage. John Summerly, Prevent DiseaseWaking Times A wave of viral and bacterial infections is sweeping across the Northern Hemisphere and people are taking longer to heal from an array of symptoms within the respiratory system. If you are resorting to conventional medicine to address these infections with antibiotics, you are not only adding to the problems associated with antibiotic resistance, but you’re also doing little to address the healing mechanisms within your body to address the cause.

Herbal remedies not only boost lung health, but they can heal infections and even repair lung damage. Here are 15 of the best herbs to boost lung health. Can We Find Better Bronchodilators to Relieve Asthma Symptoms? Effects of smoked marijuana in experimentally induced asthma. Marijuana and Asthma: What Do Studies Say? Marijuana has long been reported to relieve symptoms of asthma. Now, research explains why marijuana’s main ingredient might help patients breathe easier. Published last week in the British Journal of Pharmacology, a new study shows marijuana may have a similar effect on the airways as some asthma medications.

Using samples of human lung tissue, French researchers found that THC could block muscle contractions caused by a signaling molecule called acetycholine. Acetycholine is responsible for maintaining muscle tone of the airways and also contributes to contractions in asthma attacks. Interestingly, asthma medications block the same molecule, but from a slightly different angle. “They prevent the acetycholine from binding to its receptor,” explains Dr. For All Smokers: How to Make a Miracle Elixir to Clean Your Lungs. (Before It's News) by Healthy Food House If you’ve been smoking for more than five years, you’ve so far certainly had bronchitis, which is characterized by specific coughing. Normally it would be best to quit them forever, but if you can’t do that, we suggest to you to insert this food in your daily diet along with a recipe for a potion that’ll also help.

15 Plants & Herbs That Can Boost Lung Health, Heal Respiratory Infections & Repair Pulmonary Damage. When it comes to taking herbs for medicinal purposes, it seems the mainstream belief is that they are not as effective and not worth taking. While the effectiveness of herbs has not been studied deeply to determine how well they work across the entire population, the same could be said for most pharmaceutical drugs. Much of the time, pharmaceutical drugs attempt to mimic a compound that occurs in nature (herbs), but often bring the risk of side effects in the process.

Man Uses Cannabis Oil to Successfully Treat Another Incurable Disease – COPD. (Before It's News) COPD, or Chronic Obstructive Pulmonary Disease, ranks third in disease death rates, behind only heart disease and cancer. Man Uses Cannabis Oil to Successfully Treat Another Incurable Disease. Breath Test May Spot Lung Cancer. Researchers report test could also differentiate early and late stages of the disease. Miraculous Lung Repair After Smoking: Herbal Remedies (Video). (Before It's News) While I was camping this weekend I decided to do a very stupid thing and that was to smoke. After smoking for just a couple of days my voice is practically lost. Inhale oregano to heal your lungs. The electronic cigarettes may be the natural healer’s new gizmo. This Fruity Alternative Works 5x Better Than Cough Syrup.

15 Plants & Herbs That Can Boost Lung Health, Heal Respiratory Infections & Repair Pulmonary Damage. 15 Plants and Herbs That Help Lungs, Heal Respiratory Infections, Repair Pulmonary Damage. John Summerly | Naturalblaze | Jan 27th 2014 A wave of viral and bacterial infections is sweeping across the Northern Hemisphere and people are taking longer to heal from an array of symptoms within the respiratory system. If you are resorting to conventional medicine to address these infections with antibiotics, you are not only adding to the problems associated with antibiotic resistance, but you’re also doing little to address the healing mechanisms within your body to address the cause. Herbal remedies not only boost lung health, but they can heal infections and even repair lung damage. Here are 15 of the best herbs to boost lung health. This Inexpensive Omega-3 Source Can Protect Against Radiation. Paul Fassa | Naturalsociety | Nov 13th 2013 A study published in a recent issue of BioMed Central Cancer and conducted by the Pearlman School of Medicine at the University of Pennsylvania has once again revealed the radiation protective properties of flax seeds.

The researchers noted that the protection offered by flax seeds even included repair of tissues after exposure.