Hillary Emails Reveal True Motive for Libya Intervention. Newly disclosed emails show that Libya’s plan to create a gold-backed currency to compete with the euro and dollar was a motive for NATO’s intervention. 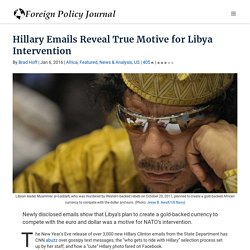 The New Year’s Eve release of over 3,000 new Hillary Clinton emails from the State Department has CNN abuzz over gossipy text messages, the “who gets to ride with Hillary” selection process set up by her staff, and how a “cute” Hillary photo fared on Facebook. But historians of the 2011 NATO war in Libya will be sure to notice a few of the truly explosive confirmations contained in the new emails: admissions of rebel war crimes, special ops trainers inside Libya from nearly the start of protests, Al Qaeda embedded in the U.S. backed opposition, Western nations jockeying for access to Libyan oil, the nefarious origins of the absurd Viagra mass rape claim, and concern over Gaddafi’s gold and silver reserves threatening European currency. 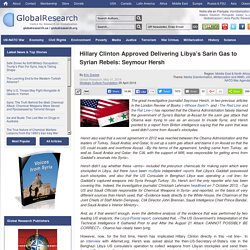 And «The Red Line and the Rat Line») has reported that the Obama Administration falsely blamed the government of Syria’s Bashar al-Assad for the sarin gas attack that Obama was trying to use as an excuse to invade Syria; and Hersh pointed to a report from British intelligence saying that the sarin that was used didn’t come from Assad’s stockpiles. Hersh also said that a secret agreement in 2012 was reached between the Obama Administration and the leaders of Turkey, Saudi Arabia, and Qatar, to set up a sarin gas attack and blame it on Assad so that the US could invade and overthrow Assad. ‘We Came, We Saw, He Died’: How Gaddafi Was Hunted & Ruthlessly Killed – Collective Evolution. Don't Look Now, But Gaddafi's Political Movement Could Be Making a Comeback in Libya. Libya Is Spiraling into Bloodshed and Disaster. 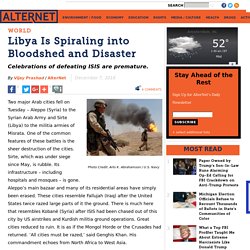 Abrahamson / U.S. Navy Two major Arab cities fell on Tuesday – Aleppo (Syria) to the Syrian Arab Army and Sirte (Libya) to the militia armies of Misrata. One of the common features of these battles is the sheer destruction of the cities. Sirte, which was under siege since May, is rubble. The Syrian Arab Army, as I noted last week, will consolidate its hold on Aleppo before making a gradual pivot eastwards toward Raqqa. Meanwhile, celebrations in Libya over the defeat of ISIS in Sirte are premature. Since August, the United States has bombed Sirte 490 times. In fact, the battle for Sirte has already opened up the surface wounds on Libya’s society. Along the coastal highway, near the oil installation, more battles are ongoing. During the Republican primary, Senator Ted Cruz said he’d like to ‘carpet-bomb ISIS into oblivion, testing if sand can glow in the dark.’ 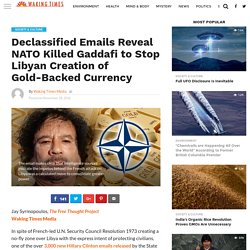 Jay Syrmopoulos, The Free Thought ProjectWaking Times Media In spite of French-led U.N. Security Council Resolution 1973 creating a no-fly zone over Libya with the express intent of protecting civilians, one of the over 3,000 new Hillary Clinton emails released by the State Department on New Year’s Eve, contain damning evidence of Western nations using NATO as a tool to topple Libyan leader Muammar al-Gaddafi. Hillary’s War Crime. Paul Craig Roberts Today, October 20, 2016, is the fifth anniversary of the murder of Muammar Gaddafi by forces organized and unleashed by US President Obama and Secretary of State Hillary Clinton. 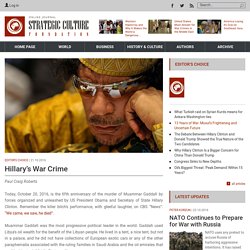 Remember the killer bitch’s performance, with gleeful laughter, on CBS “News”: “We came, we saw, he died”.

"Pray For Us": Libya Issues "Cry For Help" As ISIS Advances On Oil Fields. “We are helpless and not being able to do anything against this deliberate destruction to the oil installations. 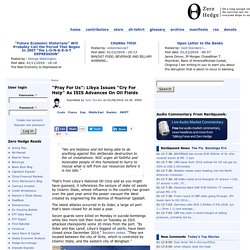 NOC urges all faithful and honorable people of this homeland to hurry to rescue what is left from our resources before it is too late.” That’s from Libya’s National Oil Corp and as you might have guessed, it references the seizure of state oil assets by Islamic State, whose influence in the country has grown over the past year amid the power vacuum the West created by engineering the demise of Moammar Qaddafi. The latest attacks occurred in Es Sider, a large oil port that’s been closed for at least a year. Seven guards were killed on Monday in suicide bombings while two more lost their lives on Tuesday as ISIS attacked checkpoints some 20 miles from the port.