Untitled. Article: Mr Trump, tear down this (Korean) wall. From Asia Times - Advertisement - It's time to put away the military hysteria with North Korea and encourage economic connections through diplomacy South Korean Soldiers at the Joint Security Area (JSA) facing the North Korean side of the border. 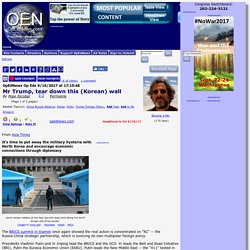 (Image by Army Vet) Permission Details DMCA The BRICS summit in Xiamen once again showed the real action is concentrated on "RC" -- the Russia-China strategic partnership, which is evolving its own multipolar foreign policy. Presidents Vladimir Putin and Xi Jinping lead the BRICS and the SCO. Vladivostok is a little over 300km away from the DPRK's Punggye-ri missile test site. In the larger geopolitical chessboard, those US "nuclear capabilities" threats voiced by Trump and his generals are not just aimed at Pyongyang. The Korean Peninsula high drama is a dense crossover of top level diplomatic warfare and accompanying infowar. Trump and US ambassador to the UN, Nikki Haley, refuse to talk. 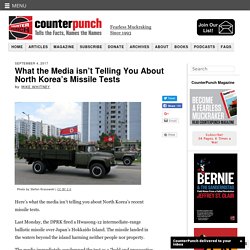 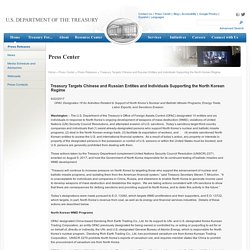 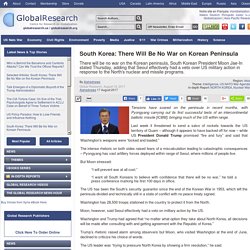 Tensions have soared on the peninsula in recent months, with Pyongyang carrying out its first successful tests of an intercontinental ballistic missile [ICBM], bringing much of the US within range. Last week it threatened to send a salvo of rockets towards the US territory of Guam – although it appears to have backed off for now – while US President Donald Trump promised “fire and fury” and said that Washington’s weapons were “locked and loaded.” The intense rhetoric on both sides raised fears of a miscalculation leading to catastrophic consequences – Pyongyang has vast artillery forces deployed within range of Seoul, where millions of people live.

But Moon stressed: “I will prevent war at all cost.” Featured image is from the author. Untitled. George W, Bush was known for his total ignorance of geography. 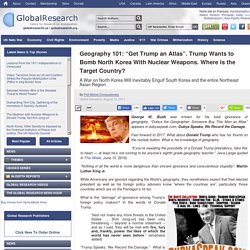 “Dubya the Geographer: Someone Buy This Man an Atlas” appears in dubyaspeak.com, Dubya Speaks, We Record the Damage. Washington's REAL Motives in North Korea and Afghanistan - Psychology, Geopolitics & Rare Earth Metals. If bombs start falling in North Korea, and if Kim Jong-Un is foolish enough to retaliate, it won’t be hard to convince the American public that war was unavoidable, and that the president should be given broad leeway to do “what needs to be done”. 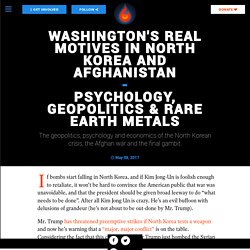 After all Kim Jong Un is crazy. He’s an evil buffoon with delusions of grandeur (he’s not about to be out-done by Mr. Trump). Mr. Trump has threatened preemptive strikes if North Korea tests a weapon and now he’s warning that a “major, major conflict” is on the table. In Geopolitics, and especially when dealing with countries that you are technically still at war with, credible threats, combined with shows of force are irresponsible provocations, that can easily spin out of control. Both sides are off the rails, which isn’t all that surprising if you really think about it. They’re both thin skinned, manicured, bullies, who mask their insecurities with pretense and bluster; tiny minds who make themselves feel bigger by putting others down.

Why Do North Koreans Hate Us? One Reason — They Remember the Korean War. “Why do they hate us?” 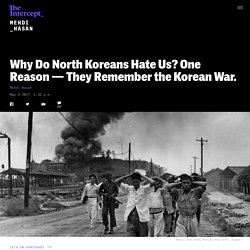 It’s a question that has bewildered Americans again and again in the wake of 9/11, in reference to the Arab and Muslim worlds. These days, however, it’s a question increasingly asked about the reclusive North Koreans. Untitled. There is a great deal of propaganda and deliberate misinformation about North Korea, which the public should know. 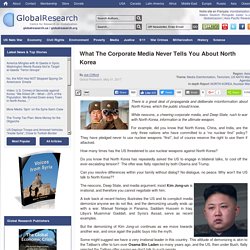 While neocons, a cheering corporate media, and Deep State, rush to war with North Korea, information is the ultimate weapon. For example, did you know that North Korea, China, and India, are the only three nations who have committed to a “no nuclear first” policy? Untitled. Paul Atwood, a Senior Lecturer in American Studies at the University of Massachusetts Boston, provides a concise summary of the history that informs North Korea’s “relations with the United States” and “drives its determination never to submit to any American diktat”. 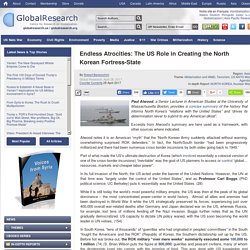 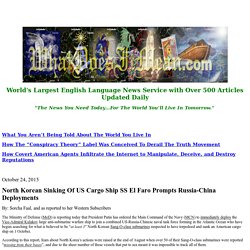 " What You Aren’t Being Told About The World You Live In How The “Conspiracy Theory” Label Was Conceived To Derail The Truth Movement How Covert American Agents Infiltrate the Internet to Manipulate, Deceive, and Destroy Reputations October 24, 2015. Non-DPRK Hackers, or Another Scandal in the Korean Intelligence Service.

Some time ago, the author of this article and some of his colleagues, including foreign ones, began receiving strange letters, with attachments representing rather clumsy attempts to hack mailboxes or to access computer files. Some of these colleagues, who had no particular sympathy for North Korea, assumed Pyongyang had a hand in this, but a big scandal unfolding today in Seoul indicates that these hacking attempts most likely came from a completely different side of the 38th parallel. The Korean intelligence service was again at the center of the scandal, and again we are talking about its Internet activities.

Only this time, its staff did not take part in political battles under false names but tried to gain access to the personal data of thousands of citizens using spyware. Later, however, it became clear that the intelligence had sent out “more than 200″ emails with hacker program attachments that could be installed automatically if you opened the letter. North Korea was NOT behind the Sony hack according to multiple security experts. Strange thing that happened in the heart of the U.S., the ill-famed cesspool of injustice, is now afloat in the world as shocking news. A Lot of Smart People Think North Korea Didn't Hack Sony. Expand So I don't know about any of the tech or tactical side of this, but I did teach Korean ESL learners for a couple of years, and I agree with the first guy: This doesn't look to me like the English of a Korean ESL speaker.

Specifically:The use of contractions (we've and we'll) is characteristic of someone near-fluent, too sophisticated to be dropping articlesOrdinal date — my students always hated ordinals because they're irregular (24th) The repeated pronouns ("we" and "you" and "us") doesn't seem like how a Korean person would phrase it, because Korean pronouns are freighted with t/v distinction and honorifics that English doesn't capture. For that reason, my students circumlocuted those words when they could because they felt imprecise. Former LulzSec hacker Sabu doesn't believe North Korea was behind the attack on Sony.