15 Ways Being Jewish Is Meaningful  Surveys reveal a disturbingly large number of American Jews who feel disconnected from their Jewish identity. 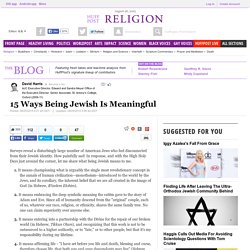 How painfully sad! In response, and with the High Holy Days just around the corner, let me share what being Jewish means to me. It means championing what is arguably the single most revolutionary concept in the annals of human civilization--monotheism--introduced to the world by the Jews, and its corollary, the inherent belief that we are all created in the image of God (in Hebrew, B'tzelem Elohim). It means embracing the deep symbolic meaning the rabbis gave to the story of Adam and Eve. Since all of humanity descend from the "original" couple, each of us, whatever our race, religion, or ethnicity, shares the same family tree.

Strikingly, Jews have never been satisfied with things as they are. And finally, as Nobel laureate Elie Wiesel once said, it means not necessarily seeking to make the world more Jewish, but rather more human. Vladimir Putin Speech: 85% Of The 1917 Soviet Government Was Made Up By Rothschild Zionist Khazars! Soviet Communist Mikhail Gorbachev. 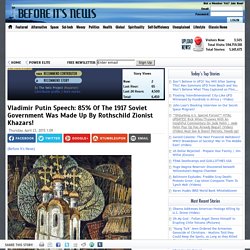 He had to resign because the people were getting fed up with Rothschild’s communism bilking operations. Sovietism aka; Communism aka; Rothschildism fell When Gorbachev Was Ousted In 1991. Now This Son Of A Bitch Is In The U.S. Attempting To Institute Depopulation Like Mao Tse Tung’s China did & The WWII Ukraine’s Holodomor did Through Agenda 21. They must destroy our Bread Basket In The Middle Of The U.S. The Earth itself is already a “natural reserve”. Russian president Vladimir Putin has said that Jews made up “80 to 85 percent of the first government of the Soviet Union” following the Bolshevik Revolution of 1917.

Russia Federation’s President Vladimir Putin. According to the official transcription of Putin’s speech at the museum, he went on to say that the politicians on the predominantly Jewish Soviet government “were guided by false ideological considerations” and supported the arrest and repression of all faiths.” Rothschild Too Big To Jail? Leaked report: Israel acknowledges Jews in fact Khazars; Secret plan for reverse migration to Ukraine. Jerusalem and Zhitomir, 16 March/Adar II 14 Get The Times of Israel's Daily Edition by email and never miss our top stories Free Sign up! 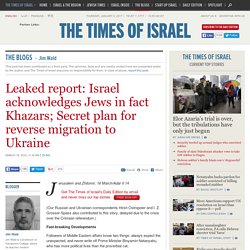 (Our Russian and Ukrainian correspondents Hirsh Ostropoler and I. Z. Grosser-Spass also contributed to this story, delayed due to the crisis over the Crimean referendum.) Fast-breaking Developments Followers of Middle Eastern affairs know two things: always expect the unexpected, and never write off Prime Minister Binyamin Netanyahu, who has more political lives than the proverbial cat. Only yesterday came news that Syrian rebels plan to give Israel the Golan Heights in exchange for creation of a no-fly zone against the Assad regime. A Warlike Turkic People—and a Mystery It is well known that, sometime in the eighth to ninth centuries, the Khazars, a warlike Turkic people, converted to Judaism and ruled over a vast domain in what became southern Russia and Ukraine. 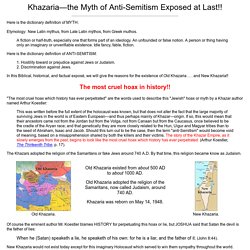 A fiction or half-truth, especially one that forms part of an ideology. An unfounded or false notion. A person or thing having only an imaginary or unverifiable existence. Idle fancy, fable, fiction. Here is the dictionary definition of ANTI-SEMITISM: 1. In this Biblical, historical, and factual exposé, we will give the reasons for the existence of Old Khazaria . . . and New Khazaria!! The most cruel hoax in history!! "The most cruel hoax which history has ever perpetrated" are the words used to describe this "Jewish" hoax or myth by a Khazar author named Arthur Koestler: This was written before the full extent of the holocaust was known, but that does not alter the fact that the large majority of surviving Jews in the world is of Eastern European—and thus perhaps mainly of Khazar—origin.