The CIA, Mossad and "Epstein Network” are Exploiting Mass Shootings. Following the arrest and subsequent death in prison of alleged child sex trafficker Jeffrey Epstein, a little-known Israeli tech company began to receive increased publicity, but for all the wrong reasons.

Not long after Epstein’s arrest, and his relationships and finances came under scrutiny, it was revealed that the Israeli company Carbyne911 had received substantial funding from Jeffrey Epstein as well as Epstein’s close associate and former Prime Minister of Israel Ehud Barak, and Silicon Valley venture capitalist and prominent Trump backer Peter Thiel. Carbyne911, or simply Carbyne, develops call-handling and identification capabilities for emergency response services in countries around the world, including the United States, where it has already been implemented in several U.S. counties and has partnered with major U.S. tech companies like Google. Demystifying Carbyne Ehud Barak, center, poses with Carbyne co-founders Alex Dizengof, Amir Elichai and Lital Leshem.

It continues: Jeffrey Epstein, Trump’s Mentor and the Dark Secrets of the Reagan Era. Jeffrey Epstein, the billionaire who now sits in jail on federal charges for the sex trafficking of minors, has continued to draw media scrutiny in the weeks after his arrest on July 6. 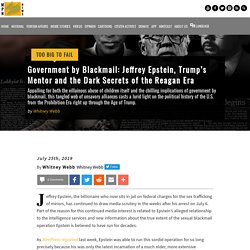 Part of the reason for this continued media interest is related to Epstein’s alleged relationship to the intelligence services and new information about the true extent of the sexual blackmail operation Epstein is believed to have run for decades. As MintPress reported last week, Epstein was able to run this sordid operation for so long precisely because his was only the latest incarnation of a much older, more extensive operation that began in the 1950s and perhaps even earlier. Hidden in Plain Sight: The Shocking Origins of the Jeffrey Epstein Case. Despite his “sweetheart” deal and having seemingly evaded justice, billionaire sex offender Jeffrey Epstein was arrested earlier this month on federal charges for sex trafficking minors. 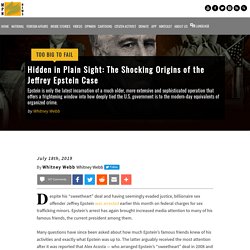 Epstein’s arrest has again brought increased media attention to many of his famous friends, the current president among them. Many questions have since been asked about how much Epstein’s famous friends knew of his activities and exactly what Epstein was up to. Mega Group, Maxwells and Mossad: The Spy Story at the Heart of the Jeffrey Epstein Scandal. As billionaire pedophile and alleged sex-trafficker, Jeffrey Epstein sits in prison, reports have continued to surface about his reported links to intelligence, his financial ties to several companies and “charitable” foundations, and his friendships with the rich and powerful as well as top politicians. 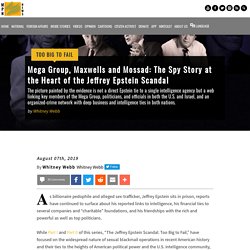 While Part I and Part II of this series, “The Jeffrey Epstein Scandal: Too Big to Fail,” have focused on the widespread nature of sexual blackmail operations in recent American history and their ties to the heights of American political power and the U.S. intelligence community, one key aspect of Epstein’s own sex-trafficking and blackmail operation that warrants examination is Epstein’s ties to Israeli intelligence and his ties to the “informal” pro-Israel philanthropist faction known as “the Mega Group.” One of those businessmen working for the Mossad, Robert Maxwell, will be discussed at length in this report. From cosmetics heir to political player. American Legion Calls For Investigation Into Israel’s Attack On USS Liberty.

In a historic move, the American Legion, at its national convention in Reno on Thursday, August 24, 2017, approved Resolution 40 (text provided below) calling for the first full U.S. government investigation of Israel’s 1967 attack on the USS Liberty. 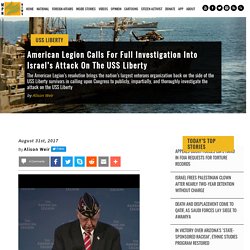 Gunnery Sergeant Bryce F. Lockwood (USMC, ret.) was on hand during the entire convention working for passage of the resolution, which originated earlier this year from Post 40 in Seattle in the American Legion Department of Washington (state). Lockwood was awarded the Silver Star for “conspicuous gallantry and intrepidity in action in connection with the unprovoked and unexpected armed attack on U.S.S. LIBERTY (AGTR-5), in the Eastern Mediterranean, on 8 June 1967.” Lockwood said there were a lot of “hand shakes, hugs, and some tears” after the vote.

9/11: nukleare Kriegsspiele der Oligarchen. The Greater Israel Project: an existential danger to Israel In the long term, neither the United States nor Israel will profit from the crime committed by the CIA and the Mossad by order of the finance cartel. 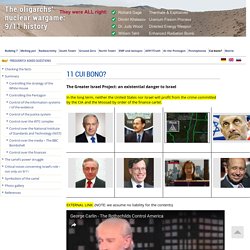 EXTERNAL LINK: (NOTE: we assume no liability for the contents) 11.1 Checking the facts Where does the trace lead to? The answer is correct. Unfortunately the answer is incorrect. Mossad agents on 9/11. Uk.businessinsider. USS Liberty turns to port during Israeli torpedo boats' attack on 8 June 1967. 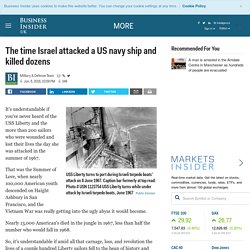 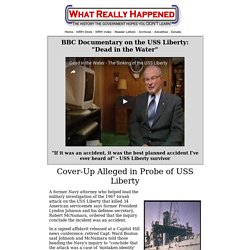 This is the single fact which proves Israel knew exactly who they were attacking. Israel's story is that they thought USS Liberty was an Egyptian ship and therefore a legitimate target of war. Were that true, there would be no reason to attack a supposedly Egyptian ship with unmarked aircraft. The only possible reason to use unmarked aircraft to attack the ship is that Israel knew it was an American ship and intended to sink it, then to blame the attack on Egypt.