Obamacare’s Government-Backed Nonprofit Health Plans Are a Disaster—and Could Cost Taxpayers Billions. Whitehouse.govThe federal government shelled out $2.4 billion in loans to a series of non-profit health plans under Obamacare, but now they’re struggling to stay alive. 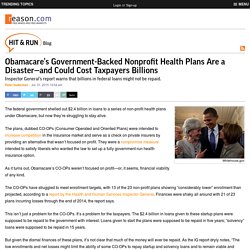 The plans, dubbed CO-OPs (Consumer Operated and Oriented Plans) were intended to increase competition in the insurance market and serve as a check on private insurers by providing an alternative that wasn’t focused on profit. They were a compromise measure intended to satisfy liberals who wanted the law to set up a fully government-run health insurance option. As it turns out, Obamacare’s CO-OPs weren’t focused on profit—or, it seems, financial viability of any kind.

The CO-OPs have struggled to meet enrollment targets, with 13 of the 23 non-profit plans showing “considerably lower” enrollment than projected, according to a report by the Health and Human Services Inspector General. Finances were shaky all around with 21 of 23 plans incurring losses through the end of 2014, the report says. Obamacare Small Business Goldmine. For progressives it is no new story that astonishingly malnourished messaging by the Obama administration compounded by egregiously misrepresentative coverage by the mainstream media has allowed an unending flow of air to feed the anti-ACA (Obamacare) gluttons. 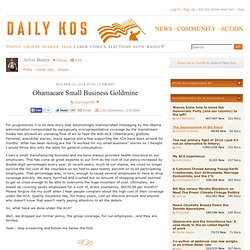 Personal, anecdotal stories, many against and a few supporting the ACA have been around for months. What has been lacking are the “it worked for my small business” stories so I thought I would throw this onto the table for general consumption. I own a small manufacturing business and we have always provided health insurance to our employees. This has come at great expense to our firm as the cost of our policy increased by double-digit percentages every year. In recent years, much to our shame, we could no longer survive the full cost of the insurance so we had to pass twenty percent on to all participating employees. So, what have we done under the ACA?

Yeah - stop screaming and follow me below the fold. 1. 2. 3. Sick Inside Our Broken Health System with that Old Familiar Terror in My Gut. Re-printed from Common Dreams with the permission of Donna Smith Donna Smith(image by Donna Smith) I stepped up to the appointment check-in desk last Thursday as I prepared to have the CT scans needed to find out what the heck is going on with my body. 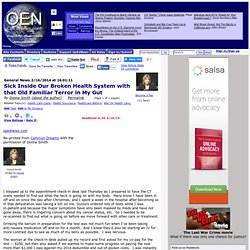 Many know I have been ill off and on since the day after Christmas, and I spent a week in the hospital after becoming so ill that dehydration was taking a toll on me. Doctors ordered lots of tests while I was in-patient and because the major symptoms have only been masked by meds and have not gone away, there is lingering concern about my cancer status, etc. So I needed to be re-scanned to find out what is going on before we move forward with other care or treatment. Drinking the barium in preparation for the test was not much fun when I've been taking anti-nausea medication off and on for a month. My shame and terror lasted right through the time when I went in for the scan. We can change the system. Where is Cathy McMorris Rodgers' ObamaCare victim 'Bette in Spokane'? UPDATE X3! Bette SPEAKS! We have limited information about Bette - she is a woman who lives in Spokane, Washington - but that's enough to do some research. 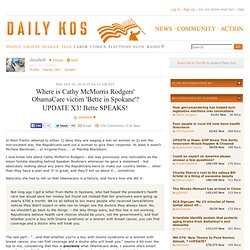 We don't know her age, so I used the worst-case (for premiums) of 64, and while we don't know her marital/family status, the statement offered was 'her premiums' so I'll first look at her cost as a single 64-year-old woman living in Spokane. Here is what the excellent Washington exchange gave me: Hmmm, it's hard to see that rate as $700 higher. Well, what if Bette wants a Gold plan? Wow! Fox Corrects CBS News Obamacare Insurance Plan Loss "Horror Story" She also noted that the fact that so many are losing their health care plans is “directly at odds with repeated assurances by the president.” 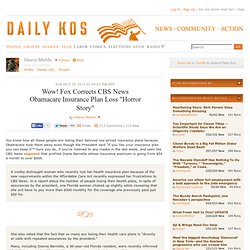 Many, including Dianne Barrette, a 56-year-old Florida resident, were recently informed that their current health care plans were not comprehensive enough to meet coverage requirements set by the ACA. Barrette was recently informed that her new plan will cost 10 times what she presently pays per month. CBS' Jan Crawford took that information from Ms. Barrette and repeated it at face value with no investigation or followup. Obamacare Defender Pissed at Losing Her Policy, Paying Higher Rates. The Chicago Sun-Times reports on the oh-so-ironic reversal of Sue Klinkhamer, 60, who used to work for Rep. 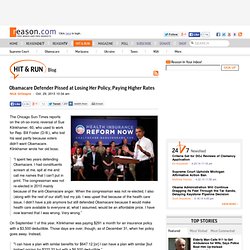 Bill Foster (D-Ill.), who lost his seat partly because voters didn't want Obamacare. Klinkhamer wrote her old boss: “I spent two years defending Obamacare. I had constituents scream at me, spit at me and call me names that I can’t put in print. Obamacare Is Another Private Sector Rip-Off Of Americans. The government of the “world’s only superpower,” the “exceptional,” the “indispensable” country, claims to know what is best for Syria, Iraq, Afghanistan, Libya, Yemen, Pakistan, Somalia, Mali, Russia, Venezuela, Bolivia, Ecuador, Brazil, China, indeed for the entire world. 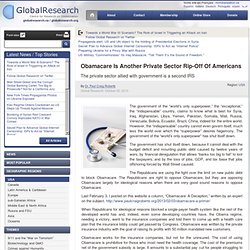 However, the “indispensable” country cannot even govern itself, much less the world over which the “superpower” desires hegemony. The government of the “world’s only superpower” has shut itself down. The government has shut itself down, because it cannot deal with the budget deficit and mounting public debt caused by twelve years of wars, by financial deregulation that allows “banks too big to fail” to loot the taxpayers, and by the loss of jobs, GDP, and tax base that jobs offshoring forced by Wall Street caused. The Republicans are using the fight over the limit on new public debt to block Obamacare. Getting young people to work against their own best interests: here's how it's done. In my book, Deadly Spin, I described the PR playbook health insurers, tobacco companies and other special interests use to influence public policy, often by deceptive means. 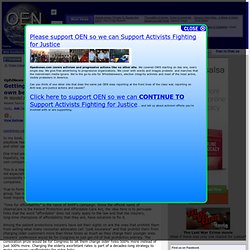 One tried-and-true tactic is to recruit third parties to help deliver your talking points -- hopefully, individuals and organizations that are held in higher regard by the public than your own company or industry. This is a staple of the insurance industry's playbook --my former colleagues know that they're not especially popular. In fact, internal polls I was privy to as an industry executive showed consistently that health insurers were beloved by the public just slightly more than tobacco companies. True to form, America's Health Insurance Plans (AHIP), the industry's big PR and lobbying group, has rolled out a slick campaign aimed at getting Congress to gut some of ObamaCare's most important consumer protections.

"Time for Affordability" is the name of AHIP's campaign.