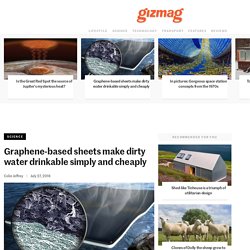 Louis (WUSTL) have developed graphene-based biofoam sheets that can be laid on dirty or salty dams and ponds to produce clean drinking water, using the power of the sun. This new technique could be a cheap and simple way to help provide fresh water in countries where large areas of water are contaminated with suspended particles of dirt and other floating matter.

The biofilm is created as a two-layered structure consisting of two nanocellulose layers produced by bacteria. The lower layer contains pristine cellulose, while the top layer also contains graphene oxide, which absorbs sunlight and produces heat. The system works by drawing up water from underneath like a sponge where it then evaporates in the topmost layer, leaving behind any suspended particulates or salts. "The process is extremely simple," said Srikanth Singamaneni, associate professor of mechanical engineering and materials at WUSTL. Scientists Invent Revolutionary Material To Clean Up Oil Spills. The cutting-edge material can absorb up to 33 times its own weight in oil! 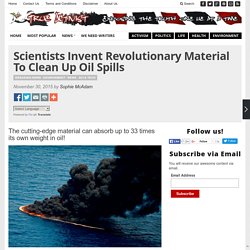 Scientists in Australia have created an amazing new material that could prove vital in a future ecological disaster like the BP oil spill of 2010. Since experts have warned that future oil spills are ‘unavoidable’, this exciting new invention couldn’t have come soon enough. The material is called a boron nitride nanosheet, and it acts just like a sponge. Scientist Dr Weiwei Lei from Deakins University’s Institute for Frontier Materials (IFM) said that the nanosheet is “made up of flakes which are just several nanometers [one billionth of a meter] in thickness, with tiny holes which can increase its surface area per gram to effectively the size of 5.5 tennis courts.” 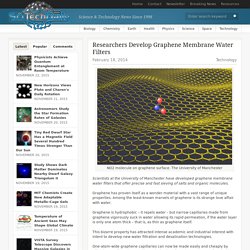 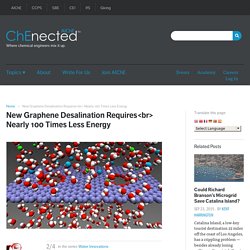 Competition for water is leading to instability and state failure, with Syria the most recent example. Between now and 2040, as the availability of fresh water evaporates due to population growth, agriculture, industry and urbanization, more people will fight just to survive on the lowest rungs of society. Among wealthier countries like Israel and Saudi Arabia, when fresh ground water isn't available, water is diverted from nearby oceans or rivers into desalination plants where the salt is removed through a relatively new process called reverse osmosis, which produces clean drinking water. Before the adoption of reverse osmosis, the main process of desalination had been "multistage flash distillation," which uses heat to evaporate water, leaving the salt behind. How long will it be before we can buy rolls of graphene in the supermarket, like plastic wrap? : graphene. Water Desalination Using 99% Less Energy With Pefrorene.

Lockheed Martin’s Pefrorene, made from a single atom 100 nanometer thick sheet of graphene is 500 times thinner than the best desalination Reverse Osmosis technology available today and cuts energy expenses involved in the process by 99%. 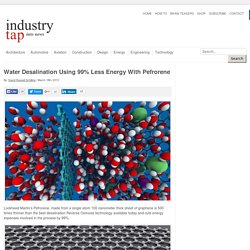 Graphene (Image Courtesy www.mit.edu) Graphene made of pure carbon atoms, is arranged in a honeycomb lattice structure at the atomic-level. Graphene sheets, carbon nanotubes, and Bucky Balls can be used as super strong materials, nanofilters and more. More Efficient Desalination Desalination is a process that removes salt and other minerals leaving fresh and drinkable water. Graphene's Great Water-Filtration Potential Unveiled By New Research. Research Published on February 17th, 2014 | by James Ayre February 17th, 2014 by James Ayre The great potential that graphene has shown with regard to electronics and energy technologies is well known, but there’s quite a bit more to graphene than ‘just’ that…. 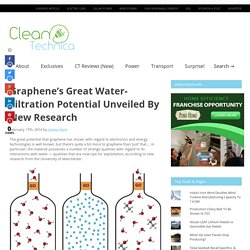 In particular, the material possesses a number of strange qualities with regard to its interactions with water — qualities that are now ripe for exploitation, according to new research from the University of Manchester. Water easily evaporates through graphene oxide membranes but they represent an impermeable barrier for other molecules.Image Credit: Dr Rahul R.Nair. Recent advances in utilization of graphene for filtration and desalination of water: A review. A Faculty of Engineering (FOE), Multimedia University, 63100 Cyberjaya, Malaysiab Institute of Microengineering and Nanoelectronics (IMEN), UKM, 43600, Bangi, Selangor, Malaysiac Universiti Kebangsaan Malaysia (UKM), 43600, Bangi, Selangor, Malaysia Received 15 December 2014, Revised 13 March 2015, Accepted 14 March 2015, Available online 20 March 2015 Choose an option to locate/access this article: Check if you have access through your login credentials or your institution Check access doi:10.1016/j.desal.2015.03.024 Get rights and content. 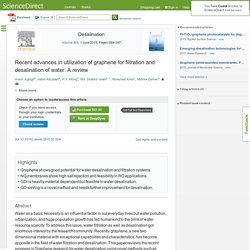 Gizmodo. Graphene and water treatment: introduction and market status. A Step Closer to Graphene Desalination Filters - Materials360 Online. To make a small graphene filter, researchers created trillions of subnanometer holds in a single-layer graphene by first bombarding it with gallium ions and then etching it to expand the defects. 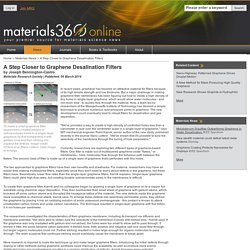 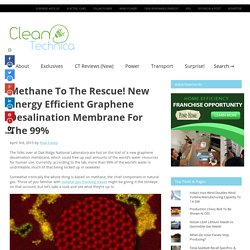 Can Graphene Oxide Filters Unlock Our Most Abundant Water Source? Humans live on a water world, and yet, many of us still struggle to slake our thirst. 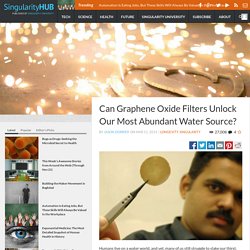 Why is that? Earth’s oceans are salty. Just 2.5% of the Earth’s water is freshwater, and of that, 60% is trapped in glaciers, 30% in groundwater (not all of which is accessible), and just 10% is on the surface in lakes and rivers. Graphene May Be Used To Make Super-Efficient Water Filters. Researchers say that while removing salt from sea water may seem complicated right now, graphene may hold the answer to perfecting the process. (Photo: Photo courtesy of <a href=&) Imagine if you could drink sea water. Wouldn't that be a great solution to the world's water shortage problem? But is desalination (removing salt from sea water) a simple process?

Researchers at the University of Manchester say that while desalination may seem too complicated right now, Graphene may hold the answer to perfecting the process, according to a press release Thursday. Applications of Graphene Oxide and Reduced Graphene Oxide. AluminumHydroxide. 91317. ALUMINUM CHLORIDE. /LABORATORY ANIMALS: Acute Exposure/ Male Sprague-Dawley rats (three per treatment group) were administered 0, 2, 10, 20, or 40 mg aluminum per kilogram ip per day for 3 days as aluminum chloride in saline.

Animals were killed 24 hr later. Aluminum was found to inhibit hepatic drug metabolism in a dose-dependent fashion. The lowest dose (2 mg or 75 umol/kg) had no effect on the parameters measured, whereas the highest dose (40 mg or 1.5 mmol/kg) caused a 52% decrease in cytochrome p450, a 71% decrease in p-nitrophenetole O-deethylase activity, and a 77% decrease in ethylmorphine N-demethylase activity. Hepatic glutathione levels were unaffected by aluminum, whereas metallothionein was induced in both liver and kidney. The distribution of endogenous metals normally associated with metallothionein was altered by aluminum administration.

Jeffery EH et al; Fund Appl Toxicol 8 (4): 541-48 (1987) Clayton, G. Sheftel, V.O.; Indirect Food Additives and Polymers. 0057. Reduced Graphene Oxide - What Is It? How Is It Created? – Graphenea. Written By Jesus de La Fuente / CEO Graphenea / j.delafuente@graphenea.com. How to Reduce Graphene Oxide: Thermal - Hypermark GO. Thermal reduction of graphene oxide is simple, requiring neither expensive equipment nor specialized techniques. Also, not only does thermal reduction result in the removal of functional groups, it also simultaneously exfoliates the rGO layers. However, there is no magic bullet. Thermal reduction may be easy, but also has various issues, ranging from disruption of the carbon lattice (which results in an impeded electron flow), to explosive exfoliation of single layers (resulting in a black powder that has little known use). How to Reduce Graphene Oxide: Chemical Pt. 1. How to Reduce Graphene Oxide: Chemical Pt. 2.