VedaPulse - Pulse Analysis Brings the Healing Power of Chinese Medicine to Everyone. Acupuncture points and meridians By Dr. 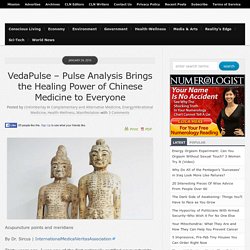 Sircus | InternationalMedicalVeritasAssociation Thirty years ago, I was one of the first nationally certified acupuncturists in the United States and went on to open two offices in New Hampshire. Was so successful that the medical board felt compelled to come after me for practicing medicine (acupuncture) without a license. We battled it out in the state legislature and because nothing was decided, I had to close my offices and leave the state. In the end, it was a good thing because it forced me on another path, one of capitalizing on my real love of being a color and communication psychologist, which became the basis of the deeper work I cultivate with patients and anyone else who dares to get close enough to me.

Personally, though I believe in the power of acupuncture, I never liked it much for myself because of my fear of needles and the pain that application of acupuncture sometimes brings. Pulse Diagnosis Conclusion. Drsircus. Apple’s next move is software for improving people’s lives and health. 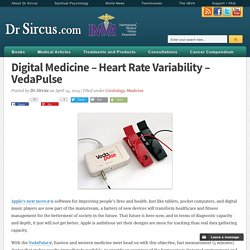 Just like tablets, pocket computers, and digital music players are now part of the mainstream, a battery of new devices will transform healthcare and fitness management for the betterment of society in the future. That future is here now, and in terms of diagnostic capacity and depth, it just will not get better. Apple is ambitious yet their designs are more for tracking than real data gathering capacity. With the VedaPulse, Eastern and western medicine meet head on with this objective, fast measurement (5 minutes) device that makes results immediately available, to provide an overview of the homeostasis (internal environment and the main regulatory mechanisms of the human body) processes and responses in the human body. Facebook users solve mystery of 'ancient' relic unearthed in Jerusalem.

Israel’s Antiquities Authority says Facebook users have solved the mystery of a gilded object thought to have been an ancient Jewish relic. 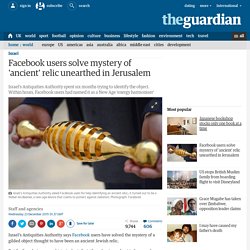 But far from being a rare historical artefact, the sabre turned out to be a modern device claimed by New Age advocates to be an “energy healer”. Amir Ganor, the authority’s director of theft prevention, says police alerted his office six months ago to a gold sceptre with seven grooves found in a Jerusalem cemetery.

It was discovered by a groundskeeper, who initially called the police, fearing it was an explosive device. Rife Machine vs Dr. Hulda Clark's Zapper - Which one to use? Hulda Clark Zapper Co - ParaZapper. Works in 1` minute, 3 minutes, 5 minutes, or 7 minutes, as well as any zapper out there that claims that they work in the same time. 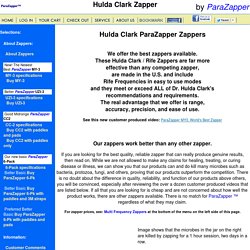 However, you will not get full benefit from those other zappers or ours in such a limited time. This is because at any single frequency, it takes a minimum of 7 minutes to have anywhere near to 100 percent effectiveness at that frequency. Shattering Cancer with Resonant Frequencies. Resonant Frequencies Cancer Treatment Anthony Holland discovered the ability of Oscillating Pulsed Electric Fields (OPEF) to destroy cancer cells and MRSA in laboratory experiments. 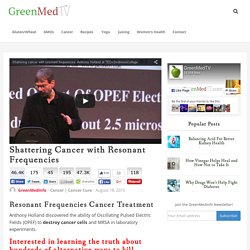 Interested in learning the truth about hundreds of alternative ways to kill cancer? The first step toward truth is to be informed. Take advantage of the worldwide, free, online screening of the Truth About Cancer Documentary. It goes live April 11th, and you can save your free spot here, and get instant access to GreenMedInfo.com founder’s interview! Rife Frequency Healing Machine: Scam or Real?

Screenshot from YouTube / Primitive Wisdom The Rife machine is a frequency healing device created by Dr. 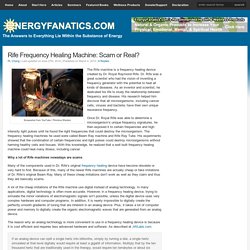 Royal Raymond Rife. Dr. Rife was a great scientist who had the vision of inventing a frequency generator with the potential to heal all kinds of diseases. As an inventor and scientist, he dedicated his life to study the relationship between frequency and disease. Once Dr. ElectRx Has the Nerve to Envision Revolutionary Therapies for Self-Healing - GovernmentSecrets.com. Many chronic inflammatory diseases and mental health conditions affecting military Service members and veterans involve abnormal activity in the peripheral nervous system, which plays a key role in organ function. 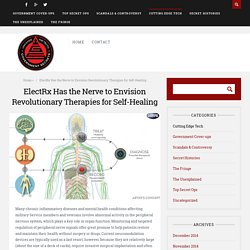 Monitoring and targeted regulation of peripheral nerve signals offer great promise to help patients restore and maintain their health without surgery or drugs. Current neuromodulation devices are typically used as a last resort, however, because they are relatively large (about the size of a deck of cards), require invasive surgical implantation and often produce side effects due to their lack of precision. DARPA’s Electrical Prescriptions (ElectRx) program is seeking innovative research proposals to help transform neuromodulation therapies from last resort to first choice for a wide range of diseases.

ElectRx (pronounced “electrics”) aims to develop groundbreaking technologies that would use the body’s innate neurophysiology to restore and maintain health. Comments comments. Healing Is Voltage. Marco Torres, Prevent DiseaseWaking Times Maintaining an alkaline environment is a key to good health. 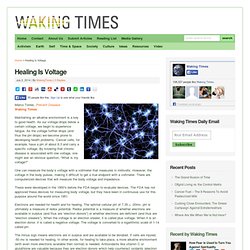 As our voltage drops below a certain voltage, we begin to experience fatigue. As the voltage further drops (and thus the pH drops) we become prone to developing health problems. Cancer cells, for example, have a pH of about 6.3 and carry a specific voltage. By knowing that chronic disease is associated with low voltage, one might ask an obvious question; “What is my voltage?”