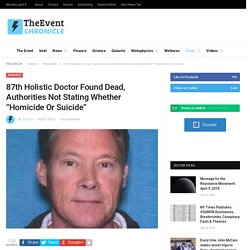 Norman Valdes Cotten Jr., 54, who lived in Howell, MI and practiced in Fowlerville and Commerce Townships, was found burned in a vehicle in Pontiac, on Monday. While authorities used dental records to confirm Cotten’s identity, “an ID, credit cards and a money clip with a few dollars were found in his back pocket,” as well. “Authorities were called just before 10 a.m. Monday about a burning car parked at the closed Webster Elementary School at 640 W. Related: 86th Doctor Found Dead in Georgia River: CDC & Atlanta Police Give Conflicting Stories. Ex-Merck employee turned anti-vaccine activist now terrorized by Big Pharma Black Ops branch. (NaturalNews) "We may need to seek them out and destroy them where they live," wrote a Merck & Co. employee who was actively plotting to murder or discredit doctors who had voiced concerns regarding the adverse health effects of an anti-inflammatory drug called Vioxx. 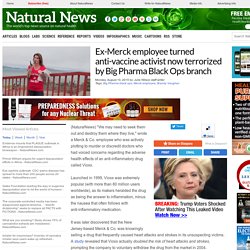 Launched in 1999, Vioxx was extremely popular (with more than 80 million users worldwide), as its makers heralded the drug as being the answer to inflammation, minus the nausea that often follows with anti-inflammatory medication. It was later discovered that the New Jersey-based Merck & Co. was knowingly selling a drug that frequently caused heart attacks and strokes in its unsuspecting victims. A study revealed that Vioxx actually doubled the risk of heart attacks and strokes, prompting the company to voluntary withdraw the drug from the market in 2004. Exposed: The Real Reason Holistic Doctors Are Being Killed In Florida. Let me get this off my chest first, I noticed that there are other articles that are also writing about this topic (and connecting the dots like we are) are being called fake news stories. 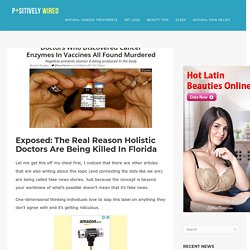 Just because the concept is beyond your worldview of what’s possible doesn’t mean that it’s fake news. One-dimensional thinking individuals love to slap this label on anything they don’t agree with and it’s getting ridiculous. And by the way, history has shown time and time again that “conspiracy theories” turned out to be true. Breaking: 77th Holistic Doctor Shot Dead In Her AZ Home With Her Entire Family. Top Holistic Author, Known For Fighting Big Pharma, Found Dead. Over the past 18 months, more than 60 holistic doctors and researchers died in strange and unexplainable circumstances, Ann Boroch, a famous holistic author, researcher, and naturopath is now one of them! 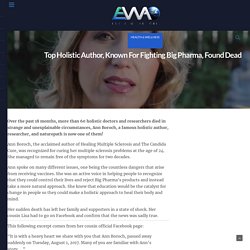 Ann Boroch, the acclaimed author of Healing Multiple Sclerosis and The Candida Cure, was recognized for curing her multiple sclerosis problems at the age of 24. She managed to remain free of the symptoms for two decades. Ann spoke on many different issues, one being the countless dangers that arise from receiving vaccines. She was an active voice in helping people to recognize that they could control their lives and reject Big Pharma’s products and instead take a more natural approach.

She knew that education would be the catalyst for change in people so they could make a holistic approach to heal their body and mind. Her sudden death has left her family and supporters in a state of shock. Another Cancer Curing Doctor Found Shot Dead Directly After SWAT Raid on Clinic - ORGANIC AND HEALTHY. In recent articles the use of cannabis oil (THC) has been explored in the treatment of seizure, proving with literature that the oil can have a drastic and positive impact on patient quality of life. 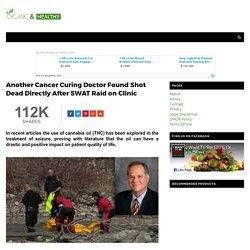 Big Pharma companies and ‘sponsored’ medical practitioners would prefer you believe in pixie dust than alternative medicines. In recent times, the demonization of chiropractors has also been spotlighted, with the American Medical Association portraying them as quacks. The suppression of medical science is a history backdating over decades. Coupled with the oddity of several medical researchers who were on the cusp of medical breakthroughs, meeting with unexpected and sometimes violent deaths, one’s curiosity is piqued, to say the least.

One such medical researcher was the pioneering Dr. Autism researcher and vaccine opponent, Dr. GcMAF is a naturally occurring molecule in the body, and has demonstrated its healing properties over multiple studies, with little side effects on the patient. 50 Holistic Doctors Have Mysteriously Died In The Last Year, But What’s Being Done About It? Nearly 50 holistic doctors have been found dead within the past year. 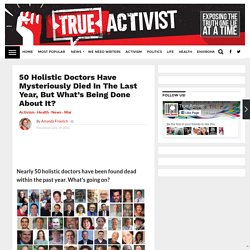 Another Holistic Doctor Murdered – Stabbed More Than 30 Times - Another holistic doctor has been found murdered in her home, stabbed more than thirty times by somebody that police say had “no motive” to kill her. 76-year-old Dr Rasmussen, a former Quincy College Professor, taught nutrition at college and advised students on how to use nutrition to live a healthy life. 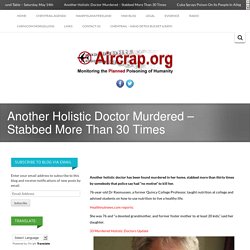 Healthnutnews.com reports: She was 76 and “a devoted grandmother, and former foster mother to at least 20 kids,” said her daughter. 33 Murdered Holistic Doctors Update The article states: “She stated that her mother, a native of Denmark, who moved to Massachusetts from Indianapolis after her retirement to be close to her, had a great sense of adventure. Murdered Holistic Doctors Update. Since my notification, the number has risen to 33. 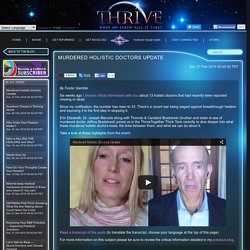 There’s a covert war being waged against breakthrough healers and exposing it is the first step in stopping it. Erin Elizabeth, Dr. Another Alternative Health Doctor Killed, Found in Makeshift Grave. By Christina Sarich | Natural Society The mysterious doctor deaths are getting even more concerning. 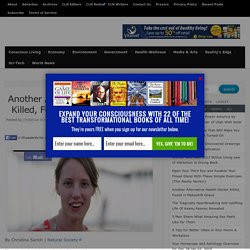 Now a Canadian alternative health doctor has been found. Canadian doctor, Linnea Veinotte, was found dead just a few days before Christmas. Even the police report says that the place Veinotte and her family resided ‘was a safe place.’ Doctor Bradstreet’s death led this rash of strange ‘suicides,’ but the number of strange death circumstances – most of alternative doctors – seems to be growing. [1] The mysterious death of a doctor who peddled autism ‘cures’ to thousands. Updated and corrected James Jeffrey Bradstreet was one of the world’s most famous — or infamous — physicians. 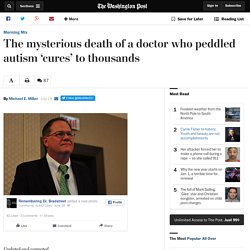 He believed vaccines caused autism. He even testified so before Congress. Twice. But he didn’t just rail against Big Pharma. Bradstreet offered thousands of autism patients around the globe controversial treatments. When Bradstreet’s body was found last month in the Rocky Broad River in mountainous North Carolina with a bullet wound to the chest, therefore, friends, family members and patients pointed fingers at drug corporations. Twelfth Holistic Doctor Found Dead, Alleged Suicide -

FAIR USE NOTICE. Many of the stories on this site contain copyrighted material whose use has not been specifically authorized by the copyright owner. We are making this material available in an effort to advance the understanding of environmental issues, human rights, economic and political democracy, and issues of social justice.

Investigators for the county sheriff ruled his death a suicide, although further information has yet to be released. Dr. Dead Doctors and the GCMAF Connection. By Russ Tanner and Richard Sachs | Global Skywatch Editor’s Note: The following video serves as an informative retrospective and update about one of the most important stories this year, one which has receive limited mainstream attention yet runs like a novel full of mystery, intrigue and real world impact. A bakers dozen of holistic doctors or researchers having been murdered, missing or having died under suspicious circumstances is already tragic. Yet the motive for all of these deaths may be the suggestion that they were supposedly working on verifying the curative properties of a biochemical (GcMAF) and beginning to show how vaccines may be depleting the body of this potential cure.

Anti-vaccine doctor behind ‘dangerous’ autism therapy found dead. Family cries foul. James Jeffrey Bradstreet’s life was full of controversy. To thousands of supporters, he was a savior: a physician who claimed vaccines caused autism and promoted radical procedures to treat those afflicted, including his own son.