Russia Preparing For Potential Removal From International Banking System. Global financial institutions like the World Bank and SWIFT can make or break the economies of entire nations due to their domination of the international banking system. 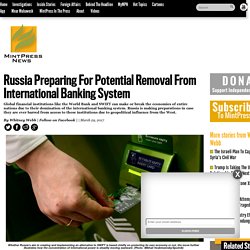 Russia is making preparations in case they are ever barred from access to these institutions due to geopolitical influence from the West. Whether Russia’s aim in creating and implementing an alternative to SWIFT is based chiefly on protecting its own economy or not, the move further illustrates how the concentration of international power is steadily moving eastward. (Photo: Mikhail Voskresensky/Sputnik) MINNEAPOLIS– In 2011, a Swiss study confirmed what many already knew or suspected: bankers run the world.

Russia to Pass a Law Formally Dumping the U.S. Dollar. Russian President Vladimir Putin has introduced legislation that would deal a tremendous blow to the... 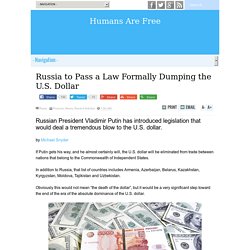 Russian President Vladimir Putin has introduced legislation that would deal a tremendous blow to the U.S. dollar. by Michael Snyder If Putin gets his way, and he almost certainly will, the U.S. dollar will be eliminated from trade between nations that belong to the Commonwealth of Independent States. In addition to Russia, that list of countries includes Armenia, Azerbaijan, Belarus, Kazakhstan, Kyrgyzstan, Moldova, Tajikistan and Uzbekistan. Obviously this would not mean “the death of the dollar”, but it would be a very significant step toward the end of the era of the absolute dominance of the U.S. dollar. Most people don’t realize this, but more U.S. dollars are actually used outside of the United States than are used inside this country. Unfortunately for us, it is only a matter of time until that happens.

"Last year Russia began unloading massive amounts of their US dollar reserves. NATO and the West Just Became Irrelevant. The dual summits that took place in Russia’s Ufa beginning 9 July were anything but routine. 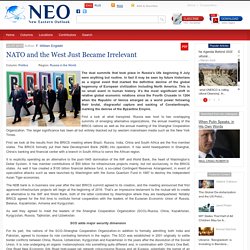 In fact it may be seen by future historians as a signal event that marked the definitive decline of the global hegemony of European civilization including North America. This is no small event in human history. Et tu, Britain? United Kingdom to join China in the anti-dollar alliance. March 13, 2015Willemstad, Curacao In another awkward blow to the rapidly waning US-dollar hegemony, America and Britain just had their “It’s not you, it’s me” moment. 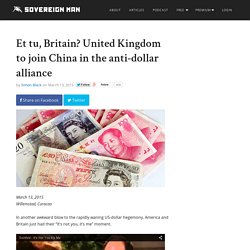 Late yesterday, the government of the United Kingdom announced that they would be applying to join the Chinese-led Asian Infrastructure Investment Bank… as a founding member. This is huge. Right now, the United States dominates the global financial system. What the BRICS plus Germany are really up to? Reprinted from RT The last summit of UNASUR, which was also the BRICS bloc(image by Photo: Archive) Winston Churchill once said, "I feel lonely without a war. 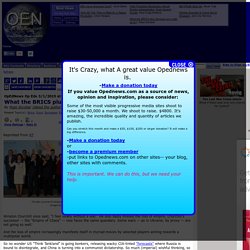 " He also badly missed the loss of empire. Churchill's successor -- the "Empire of Chaos" -- now faces the same quandary. Some wars -- as in Ukraine, by proxy -- are not going so well. And the loss of empire increasingly manifests itself in myriad moves by selected players aiming towards a multipolar world. So no wonder US "Think Tankland" is going bonkers, releasing wacky CIA-tinted "forecasts" where Russia is bound to disintegrate, and China is turning into a communist dictatorship. The acronym that all these "forecasts" dare not reveal is BRICS (Brazil, Russia, India, China, and South Africa). Putin Orders Feared “Samson Defense” To Collapse US-EU Economies. Internationalists Are Pushing The World Towards Globally Engineered Economic Warfare. Brandon Smith | Activist Post Over a year ago I published an essay entitled ‘The Linchpin Lie: How Global Collapse Will Be Sold To The Masses’. 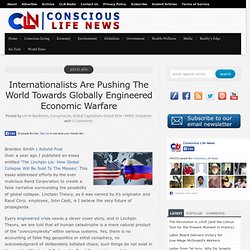 This essay addressed efforts by the ever malicious Rand Corporation to create a false narrative surrounding the possibility of global collapse. Linchpin Theory, as it was named by it’s originator and Rand Corp. employee, John Casti, is I believe the very future of propaganda. Every engineered crisis needs a clever cover story, and in Linchpin Theory, we are told that all human catastrophe is a mere natural product of the “overcomplexity” within various systems. Yes, there is no accounting of false flag geopolitics or elitist conspiracy, no acknowledgment of deliberately initiated chaos; such things do not exist in the world of “linchpins”. Today, the linchpin lie is now being carefully inserted into the mainstream narrative. I have come to the conclusion that bubbles…are a function of human nature. 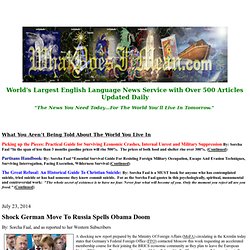 " What You Aren’t Being Told About The World You Live In Picking up the Pieces: Practical Guide for Surviving Economic Crashes, Internal Unrest and Military SuppressionBy: Sorcha Faal “In the span of less than 3 months gasoline prices will rise 500%. The prices of both food and shelter rise over 300%. (Continued) Partisans Handbook: By: Sorcha Faal “Essential Survival Guide For Resisting Foreign Military Occupation, Escape And Evasion Techniques, Surviving Interrogation, Facing Execution, Wilderness Survival (Continued)