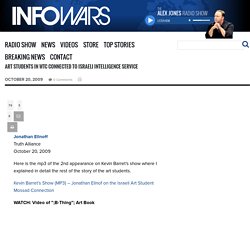 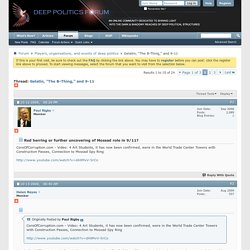 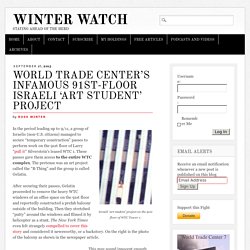 In the period leading up to 9/11, a group of Israelis (non-U.S. citizens) managed to secure “temporary construction” passes to perform work on the 91st floor of Larry “pull it” Silverstein’s leased WTC 1. These passes gave them access to the entire WTC complex. The pretense was an art project called the “B-Thing” and the group is called Gelatin. After securing their passes, Gelatin proceeded to remove the heavy WTC windows of an office space on the 91st floor and reportedly constructed a prefab balcony outside of the building. Then they stretched “putty” around the windows and filmed it by helicopter as a stunt. Boxes of BB 18 fuse holders used for Israeli ‘art project.’ Features/benefits of this product: “Purpose is to save space and workload in a complicated wiring situation. Also take note that the ceiling tiles have been totally removed and expose the steel girders.

Wiley Coyote cartoon physics. Balcony Scene (Or Unseen) Atop the World - Episode at Trade Center Assumes Mythic Qualities. The affair of the balcony ended, if indeed it ever began, with the appearance in July of a slender book of curious title, obtainable in very few places, one of them being an art gallery in a frosted storefront on Broadway near Franklin Street. 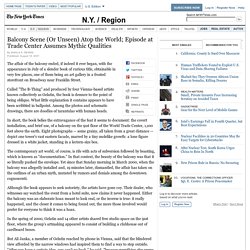 Called ''The B-Thing'' and produced by four Vienna-based artists known collectively as Gelatin, the book is demure to the point of being oblique. What little explanation it contains appears to have been scribbled in ballpoint. Among the photos and schematic drawings, there are doodles of tarantulas with human heads. In short, the book belies the extravagance of the feat it seems to document: the covert installation, and brief use, of a balcony on the 91st floor of the World Trade Center, 1,100 feet above the earth.

Eight photographs -- some grainy, all taken from a great distance -- depict one tower's vast eastern facade, marred by a tiny molelike growth: a lone figure dressed in a white jacket, standing in a lectern-size box. Mr. The 14 Israeli 'Art Students' Were Inside The WTC Towers Camping With Construction Passes. By Dick Eastman October 2009 from Rense Website Part I October 12, 2009. 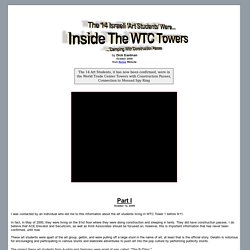 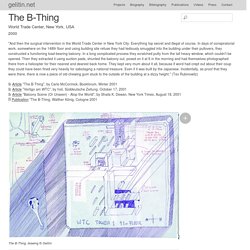 Everything top secret and illegal of course. In days of conspiratorial work, somewhere on the 148th floor and using building site refuse they had tediously smuggled into the building under their pullovers, they constructed a functioning load-bearing balcony. In a long complicated process they scratched putty from the tall heavy window, which couldn't be opened. Then they extracted it using suction pads, shunted the balcony out, posed on it at 6 in the morning and had themselves photographed there from a helicopter for their nearest and dearest back home.

Article "The B-Thing", by Carlo McCormick, Bookforum, Winter 2001. Gelatin, "The B-Thing," and 9-11 [Archive] - DEEP POLITICS FORUM. To hear the details of the WTC Art Student story, listen to the following post from when I was on the Kevin Barret Show for the 2nd appearance. 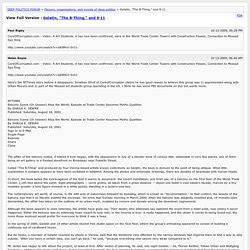 Although it was made clear that the story was to be released on Kevin Barrets show, many missed the broadcast. This article will contain the information for part 2 of a story I began to break a few weeks ago.