Here's Why You Shouldn't Eat Foods With MSG. By Michelle Schoffro Cook MSG by any other name would still be just as harmful. 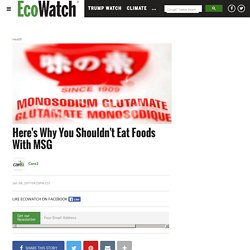 When most people hear the name monosodium glutamate or MSG, they assume this chemical food additive is only found in Chinese food. Aspartame: Five Surprising Facts You Never Knew About This Chemical Sweetener. You’ve surely heard of aspartame. 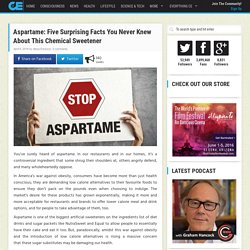 In our restaurants and in our homes, it’s a controversial ingredient that some shrug their shoulders at, others angrily defend, and many wholeheartedly oppose. In America’s war against obesity, consumers have become more than just health conscious; they are demanding low calorie alternatives to their favourite foods to ensure they don’t pack on the pounds even when choosing to indulge. The market’s desire for these products has grown exponentially, making it more and more acceptable for restaurants and brands to offer lower calorie meal and drink options, and for people to take advantage of them, too. Aspartame is one of the biggest artificial sweeteners on the ingredients list of diet drinks and sugar packets like NutraSweet and Equal to allow people to essentially have their cake and eat it too. The biggest hurdle that seems to keep people from understanding aspartame is the FDA’s approval of it as a safe sugar alternative. 1. 2. 3. 4. 5.

Coca-Cola Funded Study Claims Diet Soda May Be Healthier than Water. Carey Wedler / (ANTIMEDIA) A new study claiming diet beverages may be more beneficial to weight loss than water was funded by Coke, Pepsi, and other soft drink conglomerates. 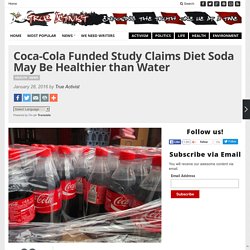 The analysis, published in November in the International Journal of Obesity by a professor at the University of Bristol, concluded that low energy sweeteners (LES) in place of sugar “in children and adults, leads to reduced EI [energy intake] and BW [body weight], and possibly also when compared with water.” The study, a “systematic review” titled, “Does low-energy sweetener consumption affect energy intake and body weight?” Disclosed it was partly funded by the International Life Sciences Institute-Europe (ILSI). Though the name seems neutral — and its board of directors includes qualified scientists — other members’ positions on the board suggest ulterior motives. Exciting: Ginger Found to Protect Against, Reverse Toxic MSG Damage.

MSG, or monosodium glutamate, is a toxic substance added to a variety of foods in order to keep you coming back for more. 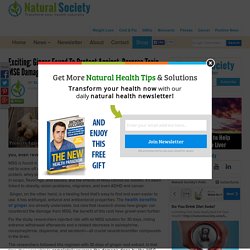 It’s known as an excitotoxin and is able to literally excite your cells to death. While steering clear of MSG is the best way to protect yourself from its damage, recent research indicates ginger may be able to further protect you, even reversing the damage that’s already been done. MSGTruth.org. Chemical Found In Colgate Total Toothpaste Linked To Cancer. A chemical found in one of North America’s most popular toothpastes, Colgate Total, has been linked to cancer and other harmful health ailments. 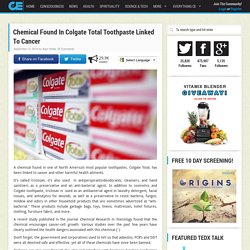 It’s called triclosan, it’s also used in antiperspirants/deodorants, cleansers, and hand sanitizers as a preservative and an anti-bacterial agent. In addition to cosmetics and Colgate toothpaste, triclosan is used as an antibacterial agent in laundry detergent, facial tissues, and antiseptics for wounds, as well as a preservative to resist bacteria, fungus, mildew and odors in other household products that are sometimes advertized as “anti-bacterial.” MSG Proven Highly Toxic: 1 Dose Causes Headache In Healthy Subjects. Sayer Ji, Green Med InfoWaking Times Found everywhere as an additive in your food, new research has uncovered that this “flavor enhancer” is extremely toxic, causing a battery of adverse health effects within normal dietary ranges. 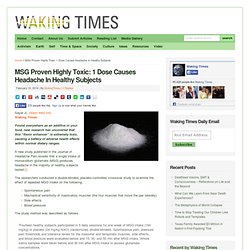 A new study published in the Journal of Headache Pain reveals that a single intake of monosodium glutamate (MSG) produces headache in the majority of healthy subjects tested. [i] The researchers conducted a double-blinded, placebo-controlled, crossover study to examine the effect of repeated MSG intake on the following: Spontaneous painMechanical sensitivity of masticatory muscles (the four muscles that move the jaw laterally)Side effectsBlood pressure The study method was described as follows: “Fourteen healthy subjects participated in 5 daily sessions for one week of MSG intake (150 mg/kg) or placebo (24 mg/kg NaCl) (randomized, double-blinded). The results were as follows: Sore JawNauseaFatigueHeadacheStomach AcheDizzinessChest Pressure Discussion About the Author. Aspartame is linked to leukemia and lymphoma in new landmark study on humans.

(NaturalNews) As few as one diet soda daily may increase the risk for leukemia in men and women, and for multiple myeloma and non-Hodgkin lymphoma in men, according to new results from the longest-ever running study on aspartame as a carcinogen in humans. 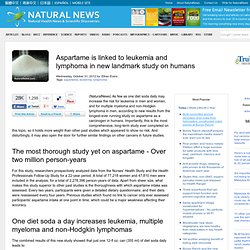 Importantly, this is the most comprehensive, long-term study ever completed on this topic, so it holds more weight than other past studies which appeared to show no risk. And disturbingly, it may also open the door for further similar findings on other cancers in future studies.For this study, researchers prospectively analyzed data from the Nurses' Health Study and the Health Professionals Follow-Up Study for a 22-year period. A total of 77,218 women and 47,810 men were included in the analysis, for a total of 2,278,396 person-years of data. Apart from sheer size, what makes this study superior to other past studies is the thoroughness with which aspartame intake was assessed. Sources for this article include: