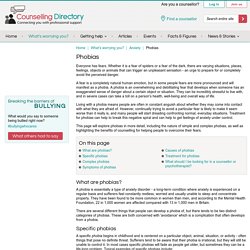 Whether it is a fear of spiders or a fear of the dark, there are varying situations, places, feelings, objects or animals that can trigger an unpleasant sensation - an urge to prepare for or completely avoid the perceived danger. A fear is a completely natural human emotion, but in some people fears are more pronounced and will manifest as a phobia. A phobia is an overwhelming and debilitating fear that develops when someone has an exaggerated sense of danger about a certain object or situation. They can be incredibly stressful to live with, and in severe cases can take a toll on a person's health, well-being and overall way of life. Living with a phobia means people are often in constant anguish about whether they may come into contact with what they are afraid of. This page will explore phobias in more detail, including the nature of simple and complex phobias, as well as highlighting the benefits of counselling for helping people to overcome their fears. 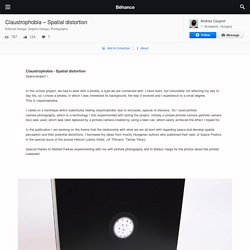 In this school project, we had to work with a phobia, a type we are connected with. I have fears, but fortunately not affecting my day to day life, so I chose a phobia, in which I was interested its background, the way it evolved and I experience to a small degree. This is claustrophobia. I called on a technique which substitutes feeling claustrophobic due to enclosed, spaces of stenosis. In the publication I am working on the theme that the relationship with what we are all born with regarding space and develop spatial perception and their potential distortions.

Special thanks to Norbert Farkas experimenting with me with pinhole photography and to Balázs Varga for the photos about the printed materials! PHOBIA ILLUSTRATIVE. Fear of Photographs. Do you dread the sound of the camera shutter or the camcorder whirr? 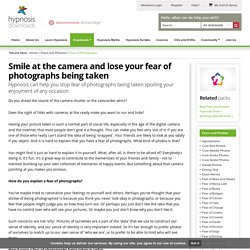 Does the sight of folks with cameras at the ready make you want to run and hide? Having your picture taken is such a normal part of social life, especially in the age of the digital camera and the internet, that most people don't give it a thought. This can make you feel very 'out of it' if you are one of those who really can't stand the idea of being 'snapped'. Your friends are likely to look at you oddly if you object. And it is hard to explain that you have a fear of photographs. You might find it just as hard to explain it to yourself. Sensory simulation system for overcoming a fear of heights : DigInfo. AQUAPHOBIA. PHOBIA POSTERS. Isabel Mendoza Photography - THE ABC'S OF PHOBIAS. PHOBIA PHOTOGRAPHYY. 'Nothing to be Afraid Of IV 15.08.1969', Bob Law. Nothing to be Afraid Of IV 15.08.1969 1969 is a large, horizontally orientated work by the British conceptual artist Bob Law. 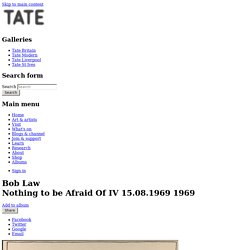 The composition consists of a rough delineation of the outline of a rhomboid shape that has been drawn in black marker pen running close to the edges of the canvas. The remainder of the canvas is unprimed and unpainted, so that the composition largely consists of a blank central space. At the bottom right corner of the rhomboid, positioned along its lower edge, the work’s date has been written numerically in marker pen. This work is one of a group of fourteen made by Law between 1969 and 1972 at his home studio in Twickenham, West London. New tate modern 4. John Vassos: Art Deco visions of the phobias of modern life. The Vault is Slate's history blog. 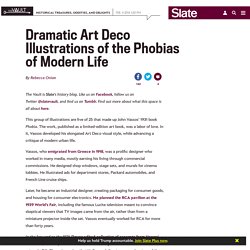 Like us on Facebook, follow us on Twitter @slatevault, and find us on Tumblr. Find out more about what this space is all about here. This group of illustrations are five of 25 that made up John Vassos’ 1931 book Phobia. The work, published as a limited-edition art book, was a labor of love. In it, Vassos developed his elongated Art Deco visual style, while advancing a critique of modern urban life. Vassos, who emigrated from Greece in 1918, was a prolific designer who worked in many media, mostly earning his living through commercial commissions. Later, he became an industrial designer, creating packaging for consumer goods, and housing for consumer electronics. In the forward to the 1976 Dover edited collection of excerpts from Vassos’ art books, used copies of which are the best way to see more of Vassos’ artwork, P.K. While Phobia doesn’t have a narrative, it does lean on visual representation to convey extreme emotion.

John Vassos, Phobia, 1931. Depicting Human Phobia: the Illustrations of John Vassos. 'Spider', Louise Bourgeois. Spider is a giant sculpture of an arachnid that stands on the floor. 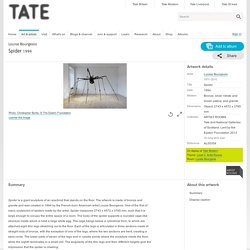 The artwork is made of bronze and granite and was created in 1994 by the French-born American artist Louise Bourgeois. One of the first of many sculptures of spiders made by the artist, Spider measures 2743 x 4572 x 3785 mm, such that it is large enough to occupy the entire space of a room. The body of the spider supports a rounded cage-like structure inside which is held a large white egg. The cage hangs below a cylindrical form, to which are attached eight thin legs stretching out to the floor. MOODJUICE - Phobias - Self-help Guide. How do phobias develop? 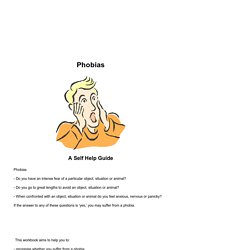 Most phobias develop in childhood; however they can also develop when we are adults. There are several theories which attempt to explain why we acquire phobias. Paying people helps them to overcome phobias - new research.