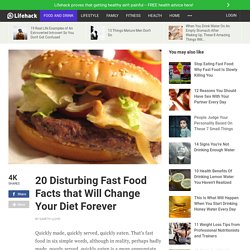 That’s fast food in six simple words, although in reality, perhaps badly made, poorly served, quickly eaten is a more appropriate summary. It’s been well documented that junk food is exactly what it says on the tin: junk. Still, it doesn’t seem to stop us from lining up in droves and flinging our hard-earned cash into fast food chains’ tills. McDonald’s continue to sell an astounding 75 hamburgers per second, and you can never go more than just over one hundred miles in the US without seeing those famous golden arches luring hungry clientele inside. Indeed, most people are willing to occasionally gorge on the kind of food that isn’t exactly great for them. But there’s more concerning aspects to fast food than the prospect of putting on a few extra pounds, and recent research across the board has revealed several horror stories that hide behind the glossy menus and vibrant packaging. 1. 2. 3. 4. 5. 6. 7. 8. 9. 10. 11. 12. 13. 14. 15. 16. 17.

13 Things You Never Knew About Losing Weight  Steven Blair is, in his own words, a “short, fat, bald guy.” 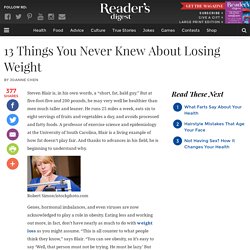 But at five-foot-five and 200 pounds, he may very well be healthier than men much taller and leaner. He runs 25 miles a week, eats six to eight servings of fruits and vegetables a day, and avoids processed and fatty foods. A professor of exercise science and epidemiology at the University of South Carolina, Blair is a living example of how fat doesn’t play fair.

Lucas Zimmermann: Traffic Lights – WeTransfer This Works. For some people the creative process can take ages, for others it magically occurs in one night. 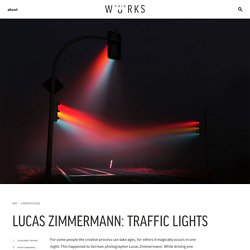 This happened to German photographer Lucas Zimmermann. While driving one evening he was stopped waiting at the traffic lights, when he suddenly paused and considered the view from an artistic point of view. What followed was a gorgeous series of traffic lights captured during a foggy night in Weimar. “I was waiting for the lights to turn green, staring at the red light when I saw the visual effect of the fog,” he says. “The red lights that made me stop gave me the opportunity to let the scene sink in and inspire me.” With only a tripod and his 17-40mm lens with him, Lucas set up, took some test shots and started shooting.

Laura Callaghan – WeTransfer This Works. Off the back of a number of big-name commissions and a brilliant solo show in London, the Irish illustrator Laura Callaghan is very much in-demand. 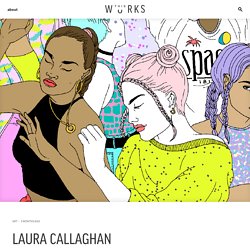 But her seemingly stellar rise has been built on huge talent, hard work and a few odd jobs along the way. For a short time she worked in the accounts department of a biscuit factory (the free biscuits were a let-down she says, but it did stand her in good stead for the financial side of her freelance career). Later she was illustration editor for Oh Comely magazine, a position that opened up her appreciation for visual styles that differed from her own. Alice Tye – WeTransfer This Works. Alice Tye grew up mostly in Kent, England, but dreaming of the California she saw portrayed in pop culture convinced her that she had been born on the “wrong side of the Atlantic.” 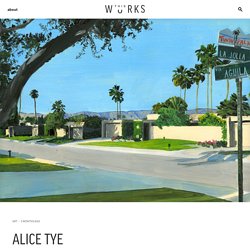 Her fascination for the West Coast grew into her work as an artist and illustrator; it is there in her lithographs of California views and an incredibly detailed four-meter long painting of La Jolla Road, Los Angeles (created through an extensive study of Google Street View). Perhaps unsurprisingly, when she first went to the US on a two-month road trip in 2015, she found it a bit off, struggling to reach a consensus between the West Coast she knew from her imagination and the one she encountered in real life.

The trip inspired her to create the series La Jolla Road Revisited and IRL. Behance. Pantheistic Insights: Vegetarianism in Psychedelic Culture. “With sufficient exposure, the psychedelic experience offers a crash course in what the Buddhists call sila, or right livelihood.” 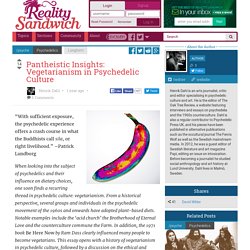 –Patrick Lundborg When looking into the subject of psychedelics and their influence on dietary choices, one soon finds a recurring thread in psychedelic culture: vegetarianism. From a historical perspective, several groups and individuals in the psychedelic movement of the 1960s and onwards have adopted plant-based diets. Notable examples include the ‘acid church’ the Brotherhood of Eternal Love and the counterculture commune the Farm. In addition, the 1971 book Be Here Now by Ram Dass clearly influenced many people to become vegetarians. Before discussing the various vegetarian groups and individuals in psychedelic culture that have been active from the 1960s until today, a few words should be said about some of their forerunners.

Some of the practitioners of Lebensreform moved to California where they and their followers became known as the Nature Boys.