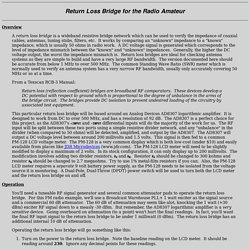 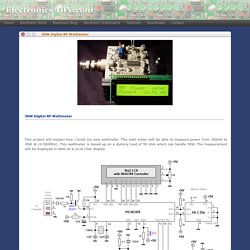 The main reason I made a new project is becasue I needed a unit which could handle higher power than 1W. n2pk_ad8307_power_meter.pdf. Instrument Electronic. Nordic nRF24L01+ Example Code. As can be seen, it uses a PCB antenna. 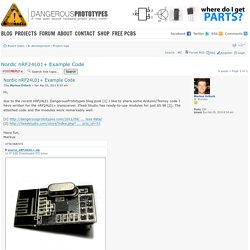 No need for an external one. The maximum distance is greater when using 250 kbps compared to 1 Mbps. The range depends on the "things" between the two Nordic devices. nRF24L01 Wireless Module with Arduino. Now we have a demo show how to use the Arduino controlling the nRF24L01 module , and you need two Arduino boards and two modules, one to transmit and the other receive. 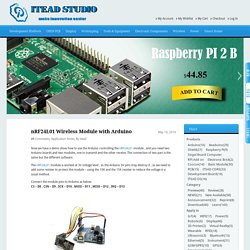 The connection of two part is the same but the different software. The nRF24L01 module is worked at 3V voltage level , so the Arduino 5V pins may destroy it , so we need to add some resister to protect the module – using the 10K and the 15K resister to reduce the voltage is a usual method. Connect the module pins to Arduino as below: Download the code below into the TX Arduino (transmit) — This code will drive the nRF24L01 module to send out data form 0×00 to 0xFF . 2.4G Wireless nRF24L01+ Module 2.4G Wireless nRF24L01 Module [WIR001] - $5.50 : iStore, Make Innovation Easier.

This module uses the newest 2.4GHz transceiver from Nordic Semiconductor, the nRF24L01+.This transceiver IC operates in the 2.4GHz band and has many new features! 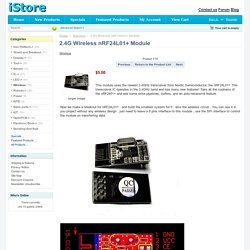 Take all the coolness of the nRF2401+ and add some extra pipelines, buffers, and an auto-retransmit feature. KAUNE. TF3CY – Benedikt Sveinsson. Building a amplifier like this ground up is quite a task, and requires a lot of commitment . 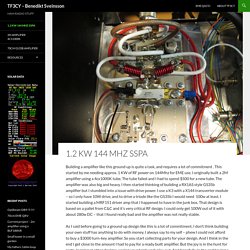 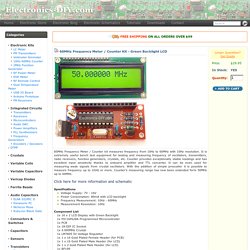 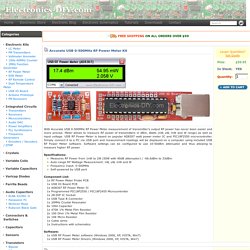 Meter allows to measure RF power of transmitters in dBm, Watts (nW, uW, mW and W range) as well as input voltage. USB RF Power Meter is based on popular AD8307 watt power meter IC and PIC18F2550 microcontroller. Simply connect it to a PC via USB port and measurement readings will be displayed on a computer using included USB RF Power Meter software. Software settings can be configured to use 10-50dBm attenuator and thus allowing to measure higher RF power. 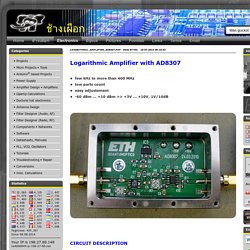 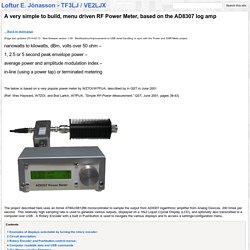 New firmware version 1.08. Digital Wattmeter with AD8307, PIC16F876, LCD Display. Digital Wattmeter English mainpage Vis Dansk oversat side NEW SOFTWARE AVAILABLE 28 okt 2008 The input board is a small PCB mounted directly on the connector. The main CPU board is mounted directly on the display. Updated 3. ARDUINO PROJECTS. This sketch will readout RF power and SWR from any SWR bridge (for example 'monimatch' type). As this 'monimatch' type of bridge is frequency dependant, the meter must be calibrated for every band. Because my primary interest was for VHF/UHF/SHF, I have foreseen positions for 6m, 4m, 2m, 70 cm, 23cm and 13cm bands - but you can use the ARDUINO readout on HF as well. If you intend to build a HF or VHF bridge yourself, there are several designs available on the web : I recommend to take a look at the information here, here , here and there ! HF_bridge_diode_FWDvoltage_compensated.pdf.

OH2NLT_bridge.pdf. SWR Bridge. Building Instructions: 1. Inventory all Parts. Homebrew swr meter. K6JCA: More Notes on Directional Couplers for HF. In a previous post I looked at how the popular "Tandem-Match" Directional Coupler worked. Recall from that analysis:I analyzed the Tandem-Match coupler in terms of "lumped" circuit elements, not distributed elements.The coupler works by taking a sample of the voltage across the transmission line at a single point and a sample of the current through that point.

I think I can call this a success through 6M. 2M it starts to fall apart and frequencies above 2M are simply relative. ALL THINGS RADIO @ NØFP. Rolling your own furnace controller. Computer monitor Ambilight clone shows remarkable performance. Checking Email With The ESP8266. Ever so slowly, everyone’s favorite WiFi adapter is making its way into Internet-enabled projects. Watt Meter build walks you through Power Measurement basics. Ambilight clone uses video pass-through; needs no computer. Weather monitoring. PIC based USB input devices. PIC USB host shortcuts. Debounce Code – one post to rule them all. Cheap and easy logic signal generator. While function generators or analog signal generators are ubiquitous in their utility, we haven’t seen much of logic function generators on Hack a Day. Luckily, [Dilshan] sent in a really neat 8-channel signal injector that is amazingly simple to build and comes with a great front end for editing patterns from your computer.

The hardware portion of the build is kept to a minimum with a PIC18F chip, USB socket, and header pins as the only major components. This board serves as the hardware output for the Kidogo software. This software provides a very nice interface to generate 5 volt logic signals on eight separate channels that will immensely help exploring your digital world. With a great interface and very easy to build hardware, we can easily see the Kidogo hardware finding its way onto workbenches around the world. Arduino PIC programmer writes to 18F family. PIC 18F4550 dev board. USBPIC controls just about anything. Fubarino Contest: Serial Data Transmission. Kernel driver for the PIC18F4550 microcontroller. Arduino IDE Support for the ESP8266.