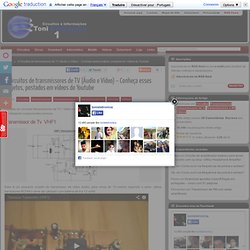 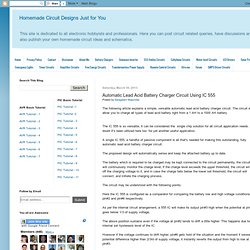 The circuit will allow you to charge all types of lead acid battery right from a 1 AH to a 1000 AH battery. The IC 555 is so versatile, it can be considered the single chip solution for all circuit application needs. No doubt it's been utilized here too for yet another useful application. A single IC 555, a handful of passive component is all that's needed for making this outstanding, fully automatic lead acid battery charger circuit. How to wire a Raspberry Pi to a Sainsmart 5v Relay Board. Okay, took some current measurements and played with the configuration a little. 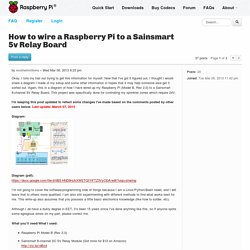 As I said, I have no problem activating relays using 3.3v for the VCC, but after playing around a bit, I found that the relays seem to engage more solidly using 5V (either from GPIO or direct from the supply), and the LED's are brighter, so I plan to run the VCC with 5V directly from the supply and jumper between VCC and JDVCC. You are correct about adding a resistor to pull the GPIO voltage down. When I turn on the cluster, one of the relays that I'm using is consistently activated during boot, but only for half a second or so (which isn't a big deal for a sprinkler system, but might as well do things right).

So, current at the collector of the NPN transistors is consistently between 2.17mA and 2.2mA, regardless of whether I'm using 3.3V or 5V for the VCC. Spectrum Analyser. KB9JJA’s Building of Scotty’s 0 - 3 GHz Spectrum Analyser This project has got to be the ultimate build for anyone interested in electronics and home brewing equipment. 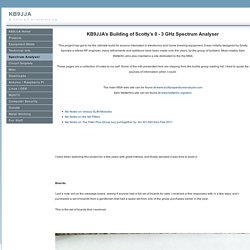 It was initially designed by Scotty Sprowls a retired RF engineer, many refinements and additions have been made over the years, by the group of builders. Homebrew spectrum analyser. I decided to try my hand at building a spectrum analyser after seeing the design by Roger Blackwell, G4PMK, in the Radio Communication Handbook5. 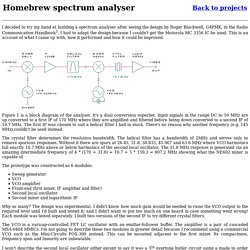 I had to adapt the design because I couldn't get the Motorola MC 3356 IC he used. This is an account of what I came up with, how it performed and how it could be improved. Figure 1 is a block diagram of the analyser. Using the ESP8266 as a Web-enabled sensor. nRF24LU1 nRF24L01 Kits, wireless downloader for Taijiuino [WLE-PROG-TJ_00A] - $25.00 : Elechouse, Arduino Play House. Overview This products contains two items: master module and slave module. 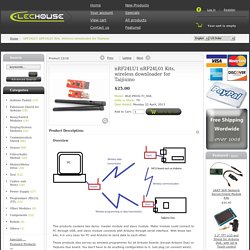 Mater module could connect to PC through USB, and slave module connects with Arduino through serial interface. With those two kits, it is very easy for PC and Arduino to send data to each other. Those products also serves as wireless programmer for all Arduino boards (except Arduino Due) or Taijiuino Due board. PIC. Search. Sensors. PICs. Simplest serial port terminal in C# « Balau. Serial ports are not very useful for the end-user, but they are very important for administration of headless (without monitor) servers and for embedded device development. For example, if you are designing a chip that contains a micro-processor with a serial port (UART) to communicate with an external control (such as a graphical tool running on a PC) chances are that you won’t immediately have a real device attached to the real serial port of the PC.

You can develop your graphical user interface on one side, and a model of the device on the other side. com0com graphical Setup. Microsoft Visual Basic 2010 - Com Port Tutorial - The Engineering Projects. SerialPort Class ( Component ) in Visual BASIC ( VB2008, VB2010, VB.NET ) for RS232 Communications. IMPORTANT: For a tutorial on using the MSCOMM control with older versions of Visual Basic See: Using Visual Basic and the MSCOMM Control with ADR ( RS232 )Devices NOTE1 : This programming guide assumes the user has a basic knowledge of Visual Basic programming. 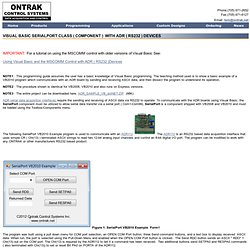 The teaching method used is to show a basic example of a VB2010 program which communicates with an ADR board by sending and receiving ASCII data, and then dissect the program to understand its operation. NOTE2 : The procedure shown is identical for VB2008, VB2010 and also runs on Express versions. NOTE3 : The entire project can be downloaded here. Simple electronics projects and small basic hobby projects/circuits. This article is a collection of simple electronics circuits we have published over a span of 3 years, which can be used as simple electronics projects for students, beginners, engineering students and other hobbyists. 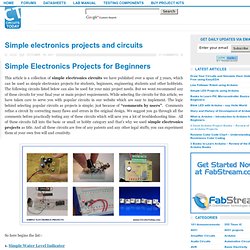 The following circuits listed below can also be used for your mini project needs. But we wont recommend any of these circuits for your final year or main project requirements. While selecting the circuits for this article, we have taken care to serve you with popular circuits in our website which are easy to implement. I2C modules. Juguetes. CircuitMaker from Altium. Altium recently announced CircuitMaker, their entry into the free/low-cost PCB design tool market. 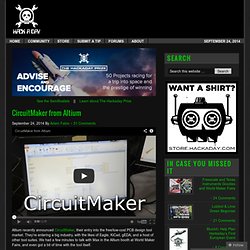 They’re entering a big industry, with the likes of Eagle, KiCad, gEDA, and a host of other tool suites. We had a few minutes to talk with Max in the Altium booth at World Maker Faire, and even got a bit of time with the tool itself. Hands on, it definitely has the look and feel of Altium Designer, right down to the familiar yellow and green boxes for schematic and sheet parts. Center stage was the 3D view, a feature which Altium has had in their software since the late 90’s. CircuitMaker’s website is pushing the collaboration aspect of the software.

Proteus - Isis. Dry Film Photopolymer for making circuit boards. I was reading on different web pages what could be the better way on doing a printed circuit. 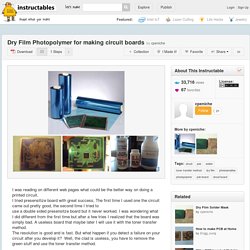 I tried presensitize board with great success, The first time I used one the circuit came out pretty good, the second time I tried to use a double sided presensitze board but it never worked. I was wondering what I did different from the first time but after a few tries I realized that the board was simply bad. A useless board that maybe later I will use it with the toner transfer method. The resolution is good and is fast. MLX90614 Series 5.5 V 13.5 mA Single and Dual Zone Infra Red Thermometer - TO-39. MLX90614 - Single and Dual Zone Infrared Thermometer The MLX90614 is an Infrared thermometer for non contact temperature measurements. The MLX90614 integrates two Melexis chips in TO-39 package: the IR sensitive thermopile detector (MLX81101) and the signal conditioning specially designed to process the output of IR sensor (MLX90302). Powersupply / Converter. Arestut.pdf. TC2004A-01.pdf. ERM2004-2_Interfacing.pdf. 20x4 LCD Display White/Blue LED Backlight.

20x4 LCD Display White/Blue LED Backlight A 20 x 4 character LCD display with white text on a vivid blue backlit LCD. The pictures don't do justice to the bright blue background with clear white text of this display. 4 lines of 20 characters. Standard Hitachi HD44780 compatible interface for easy connection to microcontrollers. Systronix_20x4_lcd_brief_data.pdf. OverClocked inside - Redaktion ocinside.de PC hardware page. Serial-port-vb - serial-port-vb.pdf. Com Ports and the MSComm Control - VB 6 tutorial. RealTerm: Serial/TCP Terminal. EEPROM Test Code. This test program stores a string of seven character values "abcdefg" to the EEPROM. Then, it retrieves them back and prints them in the SimpleIDE Terminal. To do so, the code performs these steps: Create an ID for the I2C busSet up the I2C busSend data to the I2C device on the busCheck if the I2C device is ready againRetrieve data from the I2C device on the busPrint the retrieved data to the terminal.

Nokia Lcd. Pcboards.pdf. Index of /tutorials. Printed Circuit Board Layout. Some circuit designs are fabricated on tiny silicon wafers and others consist of various components connected by cables. However, the circuits that are often the center of an EMC engineer's attention are those that are laid out on cardboard or fiberglass epoxy boards. Printed circuit boards similar to the one illustrated in Figure 1 can be found in nearly all electronic systems. Circuit components with metal pins are connected by copper traces. Surface mount technology (SMT) components are glued to the top and/or bottom of a board. Double-Sided Printed Circuit Boards. Making the leap from single-sided printed circuit boards to double-sided boards presents a few challenges but the rewards are worth it.

With two-sided boards, traces can now cross over each other, increasing density without point-to-point soldering. Double-sided CAD image Design the board using a CAD (computer-aided drafting) program and print to iron-on film just as you would for single-sided boards. The obvious difference is that the films aren’t two separate boards, but two layers of the same circuit. Design the two sides to interact with each other, passing signals and voltage from one side to the other. Microcontroller Notebook: April 2012. PROJECT OBJECTIVE: Replace the AVR processor on the Arduino form factor with a 28 pin 18F PIC processor. Lab 14: Inter-Integrated Circuit (I2C) communication. Bare Conductive Paint Pen - 10mL ID: 1306 - $9.95. Electrical Engineering.

Electrical Engineering Fundamentals. Wavelength. Assuming a sinusoidal wave moving at a fixed wave speed, wavelength is inversely proportional to frequency of the wave: waves with higher frequencies have shorter wavelengths, and lower frequencies have longer wavelengths.[6] Wavelength depends on the medium (for example, vacuum, air, or water) that a wave travels through. Examples of wave-like phenomena are sound waves, light, and water waves. A sound wave is a variation in air pressure, while in light and other electromagnetic radiation the strength of the electric and the magnetic field vary.

The kit supports in system programming (ISP) which is done through USB port. Microchip’s PIC (PIC16F877A), PIC16F/18F Primer Kit is proposed to smooth the progress of developing and debugging of various designs encompassing of High speed 8-bit Microcontrollers. Interfacing PIC with SPI memory - Northwestern Mechatronics Wiki. Overview Sometimes, it can be useful to interface the PIC with an external memory for data logging or other reasons, since there is limited memory available on the PIC itself. There are various types of memory which a PIC can communicate with.

How to Connect Multiple Switches to one Microcontroller Pin - Hacked Gadgets - DIY Tech Blog. When using microcontrollers you would normally connect one button to one input. What to do if you are running out of inputs and still have a bunch of buttons to monitor? Debouncing Contacts Part 2. Electronics. Electronics Projects Circuits. Électricité et magnétisme. Sensors. Electronics 2. Which Board is Right for Me? New Chip Alert: The ESP8266 WiFi Module (It’s $5)