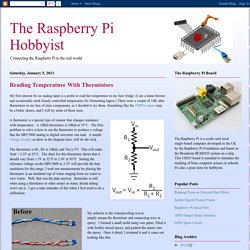 (I am a home brewer and occasionally need closely controlled temperature for fermenting lagers.) There were a couple of 10K ohm thermistors in my box of misc components, so I decided to try those. Something like the TMP36 sensor may be a better choice, and I will try some of those soon. A thermistor is a special type of resistor that changes resistance with temperature. A 10KΩ thermistor is 10KΩ at 25°C. The thermistor is R1, R2 is 10KΩ, and Vin is 5V. My solution to the waterproofing was to simply encase the thermistor and connecting wire in epoxy. I took test measurements successfully and put the data into Excel.

Remote Sensing and Remote Control over the Internet with GP-3 Board. .NET can extend its influence beyond the reaches of your keyboard. 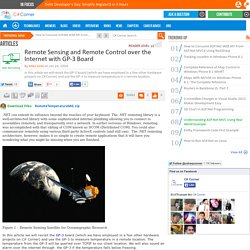 The .NET remoting library is a well-architected library with some sophisticated internal plumbing allowing you to connect to assemblies remotely, and transparently over a network. In earlier versions of Windows, remoting was accomplished with that sibling of COM known as DCOM (Distributed COM). You could also communicate remotely using various third party ActiveX controls (and still can). The .NET remoting architecture, however, makes it so simple to create remote applications that it will have you wondering what you might be missing when you are finished. Converters - Its All to Astonish YOU !! Circuit-Zone.com - Electronic Projects, Electronic Schematics, DIY Electronics. Curious C-Beeper is a fun to build little probe that can be used to quickly detect the capacity of capacitors in pF nF range, test their stability with temperature changes, find broken wires, locate wires, trace wires on PCBs, and to locate live wires behind the walls without touching them. 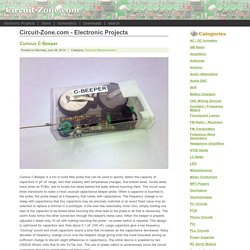 The circuit uses three transistors to make a most unusual capacitance beeper probe. When a capacitor is touched to the probe, the probe beeps at a frequency that varies with capacitance. The frequency change is so steep with capacitance that tiny capacitors may be precisely matched or an exact fixed value may be selected to replace a trimmer in a prototype. If the user has reasonably moist skin, simply holding one lead of the capacitor to be tested while touching the other lead to the probe is all that is necessary.

The user's body forms the other connection through the beeper's metal case. This is high quality function generator system using the XR2206 chip. PIC18F Archives. Lab 20: Interfacing a KS0108 based Graphics LCD (Part 1) The use of a graphical LCD (GLCD) drastically changes the look of your project. 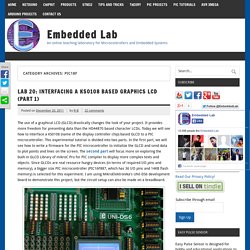 It provides more freedom for presenting data than the HD44870 based character LCDs. Today we will see how to interface a KS0108 (name of the display controller chip) based GLCD to a PIC microcontroller. This experimental tutorial is divided into two parts. In the first part, we will see how to write a firmware for the PIC microcontroller to initialize the GLCD and send data to plot points and lines on the screen. Projetos. Laser Trip Wire With Keypad Arming. Most of us have had a sibling that would sneak into our room to swipe a transistor, play your guitar or just mess with your stuff in general. 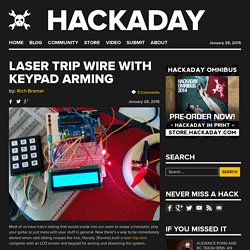 Now there’s a way to be immediately alerted when said sibling crosses the line, literally. [Ronnie] built a laser trip wire complete with an LCD screen and keypad for arming and disarming the system. How to make an external laptop graphics adaptor. Laptop graphics have always been something of a joke performance wise. 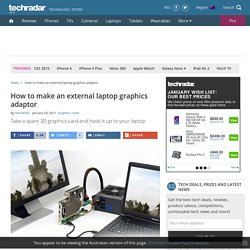 Nvidia and AMD do try, but cramming all those millions of transistors into a low-power, compact package just leads to massive expense and an inability to upgrade. Wouldn't it be perfect if you could simply use a standard external graphics card to power your laptop's 3D graphics? The good news is that you can. Electronic. Faulty ESP8266s Release Smoke, Then Keep Working? [Ray] is in a bit of a pickle. 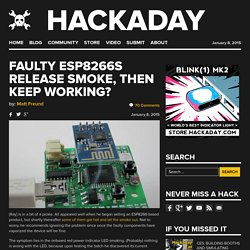 All appeared well when he began selling an ESP8266-based product, but shortly thereafter some of them got hot and let the smoke out. Not to worry, he recommends ignoring the problem since once the faulty components have vaporized the device will be fine. The symptom lies in the onboard red power indicator LED smoking. (Probably) nothing is wrong with the LED, because upon testing the batch he discovered its current limiting resistor is sometimes a little bit low to spec. Off by a hair of, oh, call it an even 1000x. Yep, the 4700 ohm resistor is sometimes replaced with a 4.7 ohm. The good news is that the LED and resistor begin a thermal race and whoever wins escapes in the breeze.

[Ray] also recommends measuring and desoldering the resistor or LED if you are one of the unlucky few, or, if worst comes to worst, he has of course offered to replace the product too. Repairing Burnt Speakers with a Steady Hand. [Martin] seems to have a knack for locating lightly damaged second-hand audio gear. 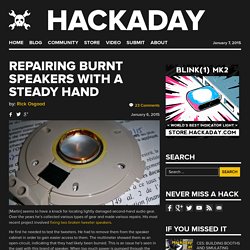 Over the years he’s collected various types of gear and made various repairs. His most recent project involved fixing two broken tweeter speakers. He first he needed to test the tweeters. He had to remove them from the speaker cabinet in order to gain easier access to them. The multimeter showed them as an open-circuit, indicating that they had likely been burned.

Making Something Useful With The ESP8266. The ESP8266 is the latest and greatest way to get a project connected to the Internet, but so far we haven’t seen many projects that actually do something with this very cool chip. 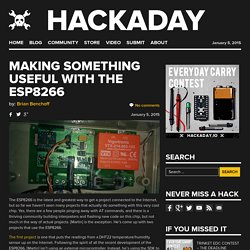 Yes, there are a few people pinging away with AT commands, and there is a thriving community building interpreters and flashing new code on this chip, but not much in the way of actual projects. [Martin] is the exception. He’s come up with two projects that use the ESP8266. The first project is one that puts the readings from a DHT22 temperature/humidity sensor up on the Internet. Turn on your computer from anywhere with an Arduino Server. Unless you live off-the-grid and have abundant free electricity, leaving your rig on while you go away on trips is hardly economic. 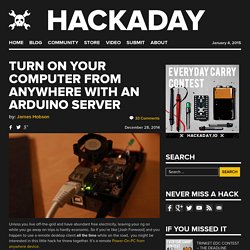 So if you’re like [Josh Forwood] and you happen to use a remote desktop client all the time while on the road, you might be interested in this little hack he threw together. It’s a remote Power-On-PC from anywhere device. It’s actually incredibly simple. Just one Arduino. SDR - Software Defined Radio. Electronics. Electronics. A new open source hardware project every month. Electro Arduino & co. Raspberry Pi. Arduino/Raspberry Pi. How a CPU is made. Internet of things. Electronics. uControllers. Projects. PCB. Peripherals. Compiling Your Own Programs For The ESP8266. When the ESP8266 was first announced to the world, we were shocked that someone was able to make a cheap, accessible UART to WiFi bridge.

Until we get some spectrum opened up and better hardware, this is the part you need to build an Internet of Things thing. It didn’t stop there, though. Some extremely clever people figured out the ESP8266 had a reasonably high-power microcontroller on board, a lot of Flash, and a good amount of RAM. It looked like you could just use the ESP8266 as a controller unto itself; with this chip, all you need to do is write some code for the ESP, and you have a complete solution for your Internet connected blinking lights or WiFi enabled toaster. Whatever the hip things the cool kids are doing these days, I guess. But how do you set up your toolchain for the ESP8266? The tutorial covers setting up the Xtensa toolchain and a patched version of GCC, GDB, and binutils. Arduino/Raspberry Pi. Field Monitoring Project. HackRF Blue. For anyone getting into the world of Software Defined Radio, the first purchase should be an RTL-SDR TV tuner. With a cheap, $20 USB TV tuner, you can listen to just about anything between 50 and 1750 MHz.

You can’t send, the sample rate isn’t that great, but this USB dongle gives you everything you need to begin your explorations of the radio spectrum. Your second Software Defined Radio purchase is a matter of contention. There are a lot of options out there for expanding a rig, and the HackRF is a serious contender to expand an SDR rig. You get 10 MHz to 6 Gigahertz operating frequency, 20 million samples per second, and the ability to transmit. Unfortunately the HackRF is a little expensive and is unavailable everywhere. The HackRF Blue’s feature set is virtually identical, and the RF performance is basically the same: both the Blue and the HackRF One can get data from 125kHz RFID cards.

RPI- Home security. Scope Noob: Bridge Rectifier. Welcome back to this week’s installment of Scope Noob where I’m sharing my experiences learning to use my first oscilloscope. Last week I started out measuring mains frequency using an AC-AC wall wart adapter. Finding a Cheaper USB to Serial Chips. A Breakout Board for the ESP8266-03. In the last few weeks we have been seeing a lot of ESP8266 based projects. Given this WiFi module is only $3 on Ebay it surely makes sense using it as an Internet of Things (IoT) platform. Application notes and circuits for Zxct1041 As A Precision Full Wave Rectifier. Measuring Loudspeaker Driver Parameters. Rod Elliott - ESPUpdated May 2014 Articles Index Main Index Measuring Thiele / Small Loudspeaker Parameters There are several different ways to measure the Thiele/Small parameters of a loudspeaker driver.

I finally did it. After years of wanting one (and pushing off projects because I didn’t have one) I finally bought an oscilloscope. Easy and Effective Way to Measure PWM… Without a Scope! Simple Terminal Hack is Fit For Hollywood. We’ve all seen the cheesy hacker scenes in movies and on TV. Three dimensional file system browsers, computer chip cityscapes, and other ridiculous visualizations to make the dull act of sitting at a keyboard look pretty on the silver screen.