Kate Middleton boosts economy by £1bn, but TOWIE makes us spend £1.4bn more. By Lauren Paxman Updated: 14:56 GMT, 30 January 2012 The Duchess of Cambridge may have boosted sales of fascinators, Jenny Packham dresses and anything from Zara, but she is not the only one who is having an impact on what we spend our money on. 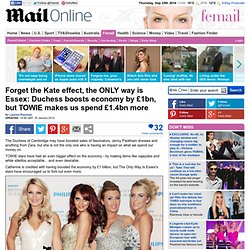 TOWIE stars have had an even bigger effect on the economy - by making items like vajazzles and white stilettos acceptable... and even desirable. Catherine is credited with having boosted the economy by £1 billion, but The Only Way Is Essex's stars have encouraged us to fork out even more. Trend-setters: The TOWIE girls - pictured at the BAFTAs - have managed to make items like vajazzles and white stilettos acceptable... and even desirable Thanks a billion: The Duchess of Cambridge, pictured in a Jenny Packham dress, has helped boost the UK economy too A new study, conducted by The Sun, shows that we have each spent an average of £100 buying into the look championed on the reality TV show - which adds up to an impressive total of £1.4billion.

How the Towie look took over Britain. When The Only Way Is Essex finally reaches the end of its run – the show is now in its 10th series, so that moment may come soon – its most lasting gift to society will be the legacy of its stars' grooming habits. 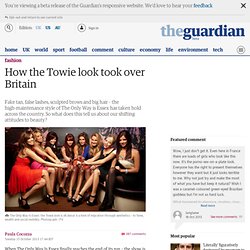 Not the vajazzles, nor the male cleavage. The female Towie aesthetic has seeped into the mainstream in more subtle permutations, colouring parts of Britain as lastingly as the Towie tour parties tinge the bathrooms of the Travelodge in Brentwood every weekend with residual fake tan. (This information comes courtesy of a taxi driver who spends a lot of time in the Travelodge reception.)

Elements of the Towie look have cropped up all over the British cultural landscape. On BBC1's 8pm news bulletin, female newsreaders sport Towie-style makeup. To speak of a Towie look, however, implies there is a clear-cut template that can be placed over women's faces in order that they all be tarred with the same disparaging brush.

Reality name checks – TV shows influence baby names. ITV to launch female-focused channel. ITV is to launch a new female-focused, free-to-air channel, called ITVBe, which will become the home of shows including The Only Way is Essex. 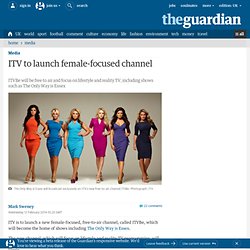 The new channel, which will focus on lifestyle and reality TV programming, will launch towards the end of this year and will be available on Freeview, Sky and Virgin. ITV said that ad-funded ITVBe will be targeted at a younger, female audience and will feature acquired programming such as the US Real Housewives. The broadcaster said that the new channel will complement ITV2 – despite plundering its schedule for shows including TOWIE and Real Housewives. ITV2 is to tighten its focus onto entertainment programming aimed at 16- to 34-year-olds, including comedy and drama series, panels shows and formats.

The Only Way is Essex and Made in Chelsea make children 'aim to be stupid', says headmistress. Jo Heywood is head of girls-only Heathfield School in Ascot, BerkshireShe criticised TOWIE’s Joey Essex, and former cast member, Mark WrightHas warned she is ‘deeply concerned about dumbing down of culture in UK’ By Sarah Harris Published: 22:56 GMT, 29 December 2013 | Updated: 13:35 GMT, 30 December 2013 Headmistress of Heathfield School Jo Heywood said appearing 'dumb' is seen as a good way to make a fortune Reality TV shows such as The Only Way is Essex and Made in Chelsea are infecting too many classrooms with a ‘culture of stupidity’, according to a leading headmistress. 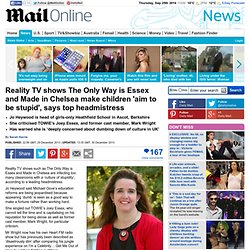 Jo Heywood said Michael Gove’s education reforms are being jeopardised because appearing ‘dumb’ is seen as a good way to make a fortune rather than working hard. She singled out TOWIE’s Joey Essex, who cannot tell the time and is capitalising on his reputation for being dense as well as former cast member, Mark Wright, for particular criticism. ‘He can make millions and millions and he doesn’t have to stretch his brain. 15 Of The Most Empowering Things Emma Watson Has Ever Said. The 31 Most Kim Kardashian Things That Have Ever Happened. Kim Kardashian: why we love her and the psychology of celebrity worship.

Kim Kardashian's fame is ascribed rather than inherited or achieved. 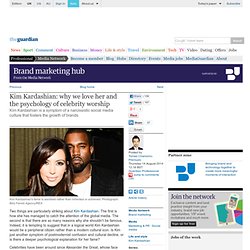 Photograph: Billy Farrell Agency/REX Two things are particularly striking about Kim Kardashian. The first is how she has managed to catch the attention of the global media. The second is that there are so many reasons why she shouldn't be famous. Indeed, it is tempting to suggest that in a logical world Kim Kardashian would be a peripheral citizen rather than a modern cultural icon. Celebrities have been around since Alexander the Great, whose face became a public emblem reproduced in coins, tableware, and jewellery, even before his death. As Chris Rojek, a professor of sociology at City University, notes in his book Celebrity, fame can be inherited, achieved, or ascribed. It appears society has learned to embrace ascribed fame as a democratic and anti-elitist alternative to inherited or achieved fame.