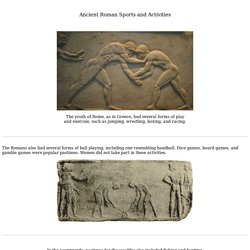 The Romans also had several forms of ball playing, including one resembling handball. Dice games, board games, and gamble games were popular pastimes. Women did not take part in these activities. Women's Ideal Body Types Throughout History. Five things you didn’t know about the first modern Olympic Games that took place 120 years ago. Today marks the 120th anniversary of the modern incarnation of the ancient Olympic Games which were staged in Athens in 1896. 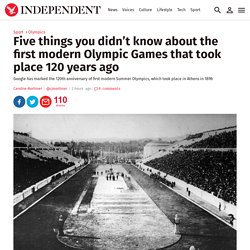 Only 14 countries participated in the original tournament and there were only 43 events, but over the next century it grew in prestige to the international sporting festival it is today. Ancient Olympia / Αρχαία Ολυμπία - 3D Tour. Η μηχανή του χρόνου S04E32 Οι αρχαίοι Ολυμπιακοί αγώνες Α. The ancient Olympics. The ancient Olympics. Xenophanes fr. 2.1-12, Xenophanes complains about the rewards the athletes receive What if a man wins a victory by the swiftness of his feet or by participating in the pentathlon, in Olympia, where the temple of Zeus is near the springs of Pisa? 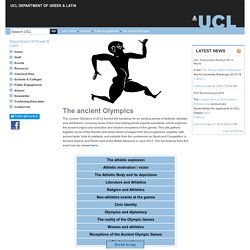 What if he seems more glorious to the citizens either by fearful boxing, or by taking place to that horrible contest called pankration? What if he receives the privilege of sitting at the front seat in the contests, and he gets his food at public cost, and a gift that he might hold as a treasure? What if he wins at a chariot-race? If he obtains all that, he will not be as worthy as I am.

Herodotus 5.47, reference to Olympic Winners Philip the son of Boutakides from Croton, followed Dorieus and died with him. Sophocles Trachiniae 503-6 But when this bride was to be won, which rivals participated in the contest for her wedding, who came forward for a contest full of blows and dust? Sophocles Trachiniae 520-2 Pindar Olympian 4.12-16 Pindar, Nemean 3.1-8.

The ancient athlete: amateur or professional? Athletic training was a basic part of every Greek boy's education, and any boy who excelled in sport might set his sights on competing in the Olympics. 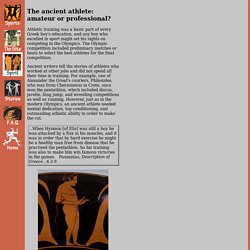 It has sometimes been assumed that "unlimited sexual license" was characteristic of ancient Rome;[2] Verstraete and Provencal express the opinion that this perspective was simply a Christian interpretation: "The sexuality of the Romans has never had good press in the West ever since the rise of Christianity. In the popular imagination and culture, it is synonymous with sexual license and abuse. Erotic literature and art[edit] Romantic scene from a mosaic (Villa at Centocelle, Rome, 20 BC–20 AD) Sex, religion and the state[edit] Raptus[edit] The Ancient Greek View of the Male Body. What every man needs now: a six-pack from ancient Greece. Visitors to the Defining Beauty exhibition at the British Museum – of sculpture from and inspired by ancient Greece – will be greeted by an ostensibly alluring sight: the naked, crouching figure of Aphrodite beckons us into the room. 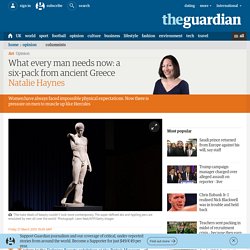 Only when we walk around her do we see that her hand may not be beckoning, so much as pulled back to give us a smack in the kisser for looking at her without invitation. For students of body image, she looks a lot more human than many contemporary representations of womanhood: not only does her belly crease as she bends forward, but her feet, frankly, are massive. This Aphrodite will not fall over on a windy day. For those of us who have spent years with flipper-feet, it’s deeply reassuring. Nonetheless, the Greeks remind us that impossible ideals of female beauty are at least two and a half thousand years old.

The Real Story of the Ancient Olympic Games - Penn Museum. One of the things we'll hear argued about the modern Olympic Games is the question of amateurism (and professionalism) of athletes. 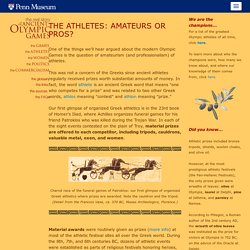 This was not a concern of the Greeks since ancient athletes regularly received prizes worth substantial amounts of money. In fact, the word athlete is an ancient Greek word that means "one who competes for a prize" and was related to two other Greek words, athlos meaning "contest" and athlon meaning "prize.

" Our first glimpse of organized Greek athletics is in the 23rd book of Homer's Iliad, where Achilles organizes funeral games for his friend Patroklos who was killed during the Trojan War. The Real Story of the Ancient Olympic Games - Penn Museum.