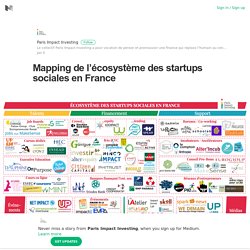 #impinv #socent. No Company Can Solve a Massive Global Problem on Its Own. Business leaders know how to go about transforming their companies to seize opportunities or meet major challenges — even if that’s easier said than done. 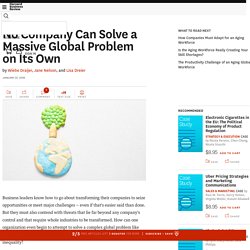 But they must also contend with threats that lie far beyond any company’s control and that require whole industries to be transformed. How can one organization even begin to attempt to solve a complex global problem like climate change, food insecurity, deteriorating infrastructure, or economic inequality? The answer is to create networks of organizations that can act together to reach common goals. But to make any real headway on solving problems of this size, coalitions have to be both big and effective. And motivating dozens or even hundreds of organizations to work together — and making sure their work makes a difference — is extremely difficult when no one is clearly in charge.

Orchestrating this kind of collective effort is possible. Additional countries quickly followed suit in Africa, Asia, and Latin America. Understanding “New Power” We all sense that power is shifting in the world. 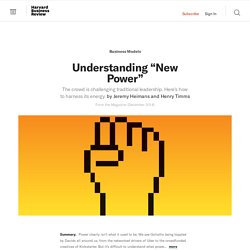 We see increasing political protest, a crisis in representation and governance, and upstart businesses upending traditional industries. But the nature of this shift tends to be either wildly romanticized or dangerously underestimated. There are those who cherish giddy visions of a new techno-utopia in which increased connectivity yields instant democratization and prosperity. The corporate and bureaucratic giants will be felled and the crowds coronated, each of us wearing our own 3D-printed crown. There are also those who have seen this all before. Both views are wrong. Old power works like a currency. New power operates differently, like a current. The battle and the balancing between old and new power will be a defining feature of society and business in the coming years. The Sharing Economy: Capitalism's Last Stand? 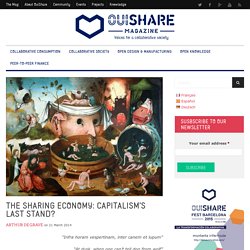 After decades of excessive consumerism, this prospect sounded revolutionary. At first. Before getting to the heart of the matter, I’d like to set something straight: the collaborative economy and sharing economy (or collaborative consumption) are not the same concept. But still, there are several contradictions in the collaborative economy, which are currently becoming most obvious in the sharing economy as it goes mainstream. Empowerment in an era of growing inequalities An economy where people value access over ownership? Why, then, all this growing discontent towards the so-called sharing economy? We are living in the post-2008 world, a time when we are not completely sure that capitalism will be able to once more reinvent itself. What is the most obvious characteristic of our current economic era? So, are we to take the sharing economy seriously? What Makes or Breaks Startups in the Sharing Economy? Insurance Rates. As recently as last year, it wasn’t clear that RelayRides’ business made financial sense. 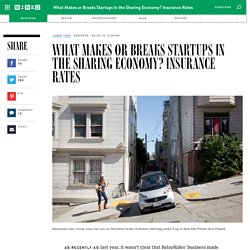 The company, which lets strangers rent one another’s cars, was growing — acquiring rivals like Wheelz and expanding into new markets. It was charging its users a healthy vigorish; car owners paid the company 25% of every rental fee, while renters kicked in an additional 15%. (Most digital marketplaces only take a total of 10-20% of every transaction.) And yet, the company was still losing money on every transaction. The culprit? “We were paying punitively high rates,” says CEO Andre Haddad. Insurance represents both the lifeblood and the biggest threat to the sharing economy. That’s because our decision to trust someone else boils down to a fairly simple equation: If the potential benefit outweighs the perceived risk, we trust. Airbnb learned this lesson the hard way during 2011’s infamous ransackgate incident. “That creates friction, obviously,” Haddad says. Go Back to Top.