The Stone of Scone 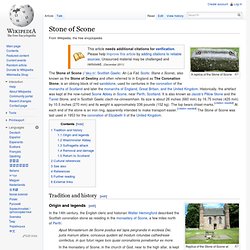 Historically, the artefact was kept at the now-ruined Scone Abbey in Scone, near Perth, Scotland. It is also known as Jacob's Pillow Stone and the Tanist Stone, and in Scottish Gaelic clach-na-cinneamhain. Its size is about 26 inches (660 mm) by 16.75 inches (425 mm) by 10.5 inches (270 mm) and its weight is approximately 336 pounds (152 kg). The top bears chisel-marks. Tradition and history[edit] Origin and legends[edit] The Stone of Destiny. The Stone of Destiny has played a central role in the coronation of Scottish kings. 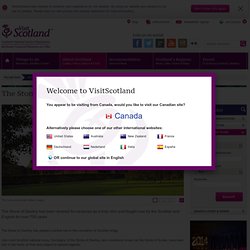 Like most Scottish national icons, the origins of the Stone of Destiny, also commonly known as the Stone of Scone, have been lost in the mists of time and subject to several legends. One theory grants it biblical origins, while others have it produced in various parts of Ireland and Scotland. However it seems that the Stone was used at Iona, Dunadd, Dunstaffnage and Scone for enthroning Scottish monarchs. Despite its plain and unremarkable appearance, this block of sandstone has had a turbulent history, having been fought over, hidden and captured for over 700 years. In 1292 John Balliol became the last king to use the Stone of Destiny in Scotland as it was captured by Edward I of England in 1296 and taken to Westminster Abbey in London.

On Christmas Day 1950, four nationalist students removed the Stone from Westminster Abbey and drove it north. Stone of Scone / Destiny. On left the Stone of Destiny as it used to be "housed" in the Coronation Throne. 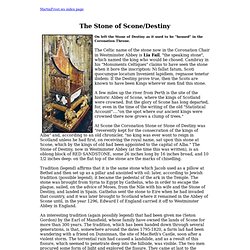 The Celtic name of the stone now in the Coronation Chair in Westminster Abbey is Lia Fail, "the speaking stone", which named the king who would be chosed. Cambray in his "Monuments Celtiques" claims to have seen the stone when it bore the inscription: Ni fallat fatum, Scoti quocumque locatum Invenient lapidiem, regnasse tenetur ibidem: If the Destiny prove true, then the Scots are known to have been Kings where'er men find this stone. A few miles up the river from Perth is the site of the historic Abbey of Scone, where the kings of Scotland were crowned. But the glory of Scone has long departed, for, even in the time of the writing of the old "Statistical Account"....

"on the spot where our ancient kings were crowned there now grows a clump of trees. " This states clearly that the stone is of red sandstone and although in person appears brown-grey, geologists assure it is indeed sandstone inside. As E. The Stone of Destiny : Scotland Magazine Issue 37. James Irvine Robertson turns his attention to the most contested artefact in Scottish history. 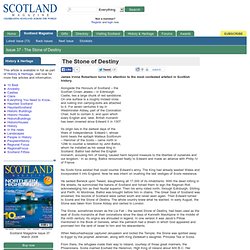 Alongside the Honours of Scotland – the Scottish Crown Jewels – in Edinburgh Castle, lies a large chunk of red sandstone. On one surface is a roughly incised cross and rusting iron carrying-bolts are attached to it. For seven centuries it lay in Westminster Abbey, part of the Coronation Chair, built to contain it, and upon which every English and, later, British monarch has been crowned since Edward II in 1307.

History - Scottish History. Stone of Destiny. The Stone Of Destiny. Some intriguing evidence of an Egyptian contact and influence during this period does appear to have been found in Tara, Ireland, when an ancient stone-age burial chamber, known as the ‘Mound of Hostages’ was excavated in 1955. 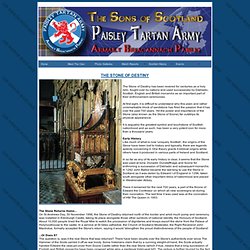 Although the mound itself is Neolithic (c.3000B.C.), the remains of a much later Bronze Age inhumation were discovered, which turned out to be that of an 18 year old youth who was buried with a bronze dagger and pin, and wearing a necklace of Egyptian ‘Faience’ beads. These beads, a type of ceramic, were found to be of genuine Egyptian origin and were quite unknown in Northern Europe. The skeleton was carbon dated to c. 1350 B.C. and this date, as we have seen, given the usual hundred years or so normally allowed for correction either way that is such a feature of carbon dating, was just around the time that Scota and her husband are supposed to have fled Egypt. 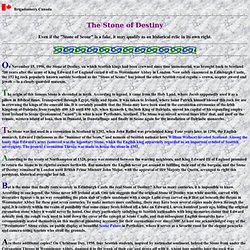 On November 15, 1996, the Stone of Destiny, on which Scottish kings had been crowned since time immemorial, was brought back to Scotland 700 years after the army of King Edward I of England carted it off to Westminster Abbey in London. Now safely ensconced in Edinburgh Castle, the 152 kg rock popularly known outside Scotland as the "Stone of Scone" has joined the other Scottish royal regalia -- crown, scepter ,sword and jewels -- in a closely-guarded museum.

The origin of this famous Stone is shrouded in myth. According to legend, it came from the Holy Land, where Jacob supposedly used it as a pillow in Biblical times. Westminster Stone theory. The Westminster Stone theory refers to the belief held by some historians and scholars that the stone which traditionally rests under the Coronation Chair is not the true Stone of Destiny but a thirteenth century substitute. 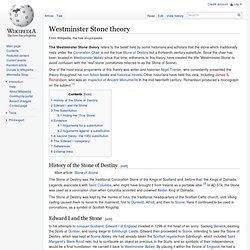 Since the chair has been located in Westminster Abbey since that time, adherents to this theory have created the title 'Westminster Stone' to avoid confusion with the 'real' stone (sometimes referred to as the Stone of Scone). One of the most vocal proponents of this theory was writer and historian Nigel Tranter, who consistently presented the theory throughout his non-fiction books and historical novels. Other historians have held this view, including James S. Richardson, who was an Inspector of Ancient Monuments in the mid-twentieth century.

Richardson produced a monograph on the subject.[1] On this Day in History - Stone of Scone Found. Special Days Every Month. 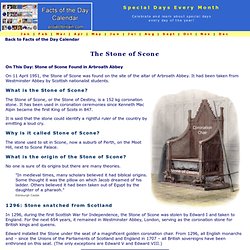 Scotland, Stone of Destiny in Edinburgh Castle. Scone Palace. For a while, after I left my home in Dundee, I lived in the town of Perth and from my window, across the Tay, I could see Scone Palace in the distance. 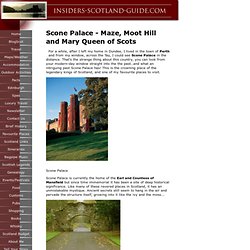 That's the strange thing about this country, you can look from your modern-day window straight into the the past..and what an intriguing past Scone Palace has! This is the crowning place of the legendary kings of Scotland, and one of my favourite places to visit. Scone Palace. StoneofCoronation. David Jay Jordan's Stone of Coronation Stone of Destiny Stone of Prophecy In 1950 BC , Jacob lays his head on a rock, has adream of God, and calls the rock "House of God. 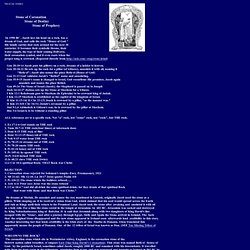 "His family carries that rock around for the next 38centuries. It becomes their symbolic throne, theirwater supply, the type of their coming Deliverer,their coronation symbol, and it even roars when theproper king is crowned. (Reposted directly from Gen 28:10-14 Jacob puts his pillows on a rock, dreams of a ladder to heaven. ALL references are to a specific rock. 1. REJECTION 1. He dreams at Moriah.