How black gold was hijacked: North sea oil and the betrayal of Scotland - This Britain - UK - The Independent. McCrone report. The McCrone report was a UK Government document which was written and researched at the Scottish Office (St. 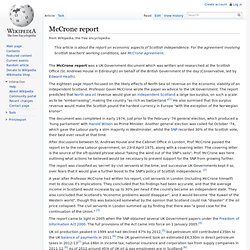 Andrews House in Edinburgh) on behalf of the British Government of the day (Conservative, led by Edward Heath). The eighteen page report focused on the likely effects of North Sea oil revenue on the economic viability of an independent Scotland. Professor Gavin McCrone wrote the paper as advice to the UK Government. The report predicted that North sea oil revenue would give an independent Scotland a large tax surplus, on such a scale as to be "embarrassing", making the country "as rich as Switzerland. The document was completed in early 1974, just prior to the February '74 general election, which produced a 'hung parliament' with Harold Wilson as Prime Minister. After discussions between St. A year after Professor McCrone had written his report, civil servants in London (including McCrone himself) met to discuss it's implications.

See also[edit] References[edit] External links[edit] McCrones Independence_Final_.doc. MccronereportScottishOffice.pdf. How Labour hid from the Scots the amount of oil in the North Sea. What will happen to the oil & gas if Scotland votes YES to independence? Well well well! 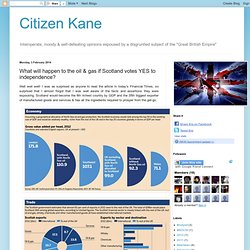 I was as surprised as anyone to read the article in today's Financial Times, so surprised that I almost forgot that I was well aware of the facts and assertions they were espousing. Scotland would become the 8th richest country by GDP and the 35th biggest exporter of manufactured goods and services & has all the ingredients required to prosper from the get-go.

The only caveat that the FT attaches to its research is that they are dependent on Scotland inheriting a geographical share of existing oil & gas reserves. To some people, that might be construed as a problem - but for a man who's spent much of the last 15 years traipsing all over the north sea as a measurement specialist - I can assure you it's no problem at all. You might notice that something is missing from the latest version of the map - the English / Scottish maritime border. From the legend, you will note that Red is crude oil, Green is Gas & Yellow is Gas Condensate (Or LPG/NGL in layman's terms) Mccronereport. Dissecting the McCrone Report, the official secret of Westminster. It appears appropriate to put this report into plain English, highlight its significant areas and make it very straightforward for the average person to understand the main thrust of this “official secret”. 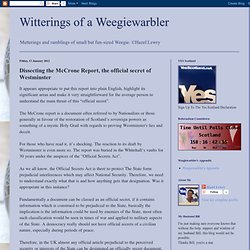 The McCrone report is a document often referred to by Nationalists or those generally in favour of the restoration of Scotland’s sovereign powers as something of a mystic Holy Grail with regards to proving Westminster's lies and deceit.For those who have read it, it’s shocking. The reaction to its draft by Westminster is even more so. The report was buried in the Whitehall’s vaults for 30 years under the auspices of the “Official Secrets Act”. As we all know, the Official Secrets Act is there to protect The State form prejudicial interferences which may affect National Security. Therefore, we need to understand exactly what that is and how anything gets that designation. It is clear this report was classified as an “official secret”, for to release it would have ended London rule. Diomhair / Secrets, The McCrone Report, The Truth of Scottish Independence /Oil.

The McCrone Report – You Sleeping Beauty. The UK Prime Minister, David Cameron, implied recently that Scots people were stupid for expressing their desire to have greater control over the energy which comes in from Scotland’s maritime sector. 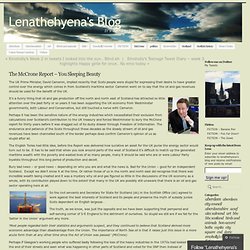 Cameron went on to say that the oil and gas revenues should be used for the benefit of the UK. It’s a funny thing that oil and gas production off the north and north east of Scotland has attracted so little attention over the past forty or so years it has been supporting the UK economy from Westminster governments, both Labour and Conservative, but still touched a nerve with Cameron. Perhaps it has been the sensitive nature of the energy industries which necessitated their exclusion from calculations over Scotland’s contribution to the UK treasury and forced Westminster to bury the McCrone report for thirty years before it was dragged out of its dusty drawer through Freedom of Information.

Bury bad news – or good news – depending on who you are and what the news is. Norway, yes. Like this: McCrone Report — My Mutterings. Background North Sea Oil Platform Shortly before the first General Election in 1974, Ted Heath's Conservative Government commissioned a report to re-assess Scottish Independence against the background of recent North Sea oil discoveries and EEC membership. 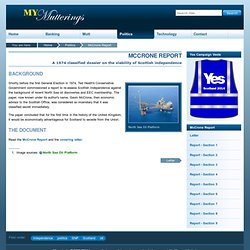 The paper, now known under its author's name, Gavin McCrone, then economic advisor to the Scottish Office, was considered so incendiary that it was classified secret immediately. Another side of Lesley Riddoch: McCrone Report and Oil. Joan McAlpine: Pump price increases - Joan McAlpine. DESPITE the fact a secret report stated Scotland would become one of the world's richest nations thanks to oil, the country now faces more pain at the pumps. 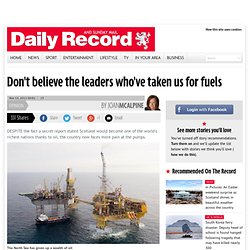 CAN we really be threatened with yet another pump price rise from the Westminster government? We already pay the highest fuel and heating bills in Europe – despite being an energy-rich nation. You need to go back to 1974 to understand why we are so powerless. How black gold was hijacked: North sea oil and the betrayal of Scotland - This Britain - UK. McCrone and the trust of the Scottish people. Wednesday, 02 November 2011 16:04 by David Milligan. 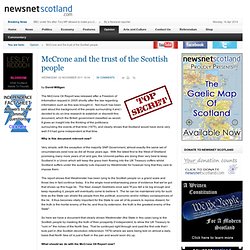 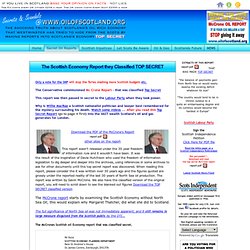 The Conservative commissioned Mc Crone Report - that was classified Top Secret This report was then passed in secret to the Labour Party when they took power. Why is Willie MacRae a Scottish nationalist politician and lawyer best remembered for the mystery surrounding his death. Watch some videos ... After you read this Top Secret Report (go to page 4 first) into the VAST wealth Scotland's oil and gas generates for London. The McCrone Report. The Truth About Scottish Independence: The McCrone Report Scandal. Gavin McCrone on the McCrone report and Scottish Independence. Mccrone report. FOLLOWING THE events of the recent week or so in the indyref debate, AhDinnaeKen presents some highly selective quotes chosen at random which sum up, in anticipation, this editor’s creeping torpor and sense of trepidation at the inevitable tedious grievance fuelled acrimony to come: The unphotoshopped turned up eyes of contempt of Stewart Hosie after being questioned by an uppity anti-Scot on his party’s post indy tax plans. 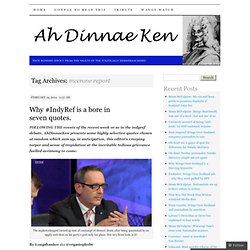 Not very braw look, is it? By Longshanker aka @ergasiophobe “A man with a grievance may easily become a bore, and this may be true of a nation with a grievance.” – Claim of Scotland, HJ Paton 1968 Correct! “…and it is now likely that transfer of North Sea oil to Scottish ownership would occasion much bitterness in England if not an attempt to forcibly prevent it.” – The Hallowed McCrone Report 1975.

The howls of outrage etc at Bullingdon Chancer Osborne’s declaration of “economic warfare” appeared to come as a surprise to some.