Macdonald. In the context of Scottish clans, the various forms of the name refer to one of the largest clans, Clan Donald. 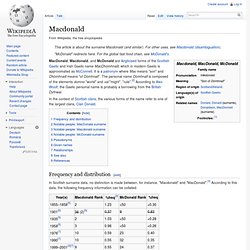 Frequency and distribution[edit] In Scottish surname data, no distinction is made between, for instance, "Macdonald" and "MacDonald".[3] According to this data, the following frequency information can be collated: Table References[4][5][6][7] Frequency data from England of 1891 shows a concentration of families bearing the "Macdonald" surname in Lancashire and Yorkshire with a lower frequency in the northernmost counties, but overall widespread distribution throughout the country.[8] "McDonald" shares the same pattern of distribution.[9] Looking at contemporaneous data from the United States, coast-to-coast distribution of both "Macdonald" and "McDonald" appears in 1880.[10][11] Looking back to 1840 in the United States, the prevalence of "McDonald" is far greater than that of "Macdonald", with concentration in the Ohio-Pennsylvania-New York corridor.[12][13] Born after 1400 A.

Clan MacDonald. Clan Donald. History of the Donald /MacDonald Clan. The Home of the Clan Donald. "The most numerous and widespread of the clans, the Clan Donald is one of the families, who, while using different surnames or different methods of writing the same surname, have an identical genealogical derivation. 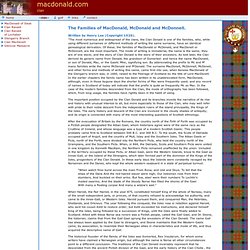 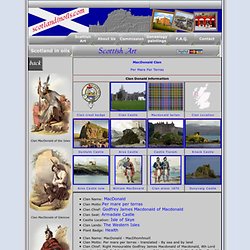 Clan Tartan : Clan links : Clan Donald UK Clan links : After 12 years there seems to be some progress in the renovations to Castle Tioram Armadale Castle on the Isle of Skye was built in the late 18th century as a mansion house and added on in the early 19th century. Today it is partly in ruin but houses the MacDonald Clan centre which is open to the public. Finlaggan Castle is located on an island, on Loch Finlaggan, on the Isle of Islay. Scottish Clan – Macdonald After the defeat Angus Mor accepted King Alexander 3rd of Scotland as his overlord and managed to keep his lands. Farquhar MacDonald and Lachlan MacDonald. Chorus. The High Council of Clan Donald. MacDonald Clan Crest, Motto and History. MacDonald Clan Crest: On a crest coronet, an armoured hand holding a cross. 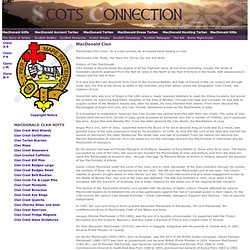 MacDonald Clan Motto: Per Mare Per Terras (By sea and land). History of Clan MacDonald: Clan Donald is beyond doubt the largest of all the Highland clans, at one time controlling virtually the whole of Scotland's western seaboard from the Butt of Lewis in the North to the Mull of Kintyre in the South, with possessions in Ireland and the Isle of Man. MacDonald or Donald Clan History: MacDonald family information - Scotweb Information Centre. Clan Donald is one of the largest Scottish clans. 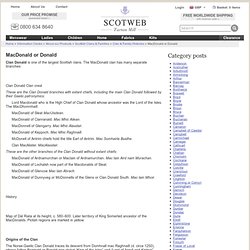 The MacDonald clan has many separate branches: The Great Scottish Clans - Featured Clans. Loch Finlaggan, Islay The Clan Donald ancestors were Lords of the Isles and their main stronghold was at Loch Finlaggan on Islay where they held their court. 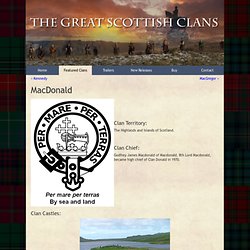 Armdale Castle on Skye, home ofThe Clan Donald Centre and Museum of the Isles Castle Tioram on the shores of Loch Moidart, seat of the MacDonald Clan of Clanranald The ruin of Dunscaith Castle in the parish of Sleat on the Island of Skye, seat of the MacDonald Clan of Sleat Clan History:For almost 400 years the MacDonalds ruled the seas and built an empire big enough to challenge Scotland's kings. And their story starts with an extraordinary man - Somerled, the greatest of all Celtic warrior kings. Born, it's thought, in Morvern around 1113, this half Norse, half Celtic warrior defeated the Vikings and rose to such power that Somerled and his descendants were known as the Lords of the Isles. MacDonald Clan Homepage Scottish Clans Tartans Kilts Crests and Gifts.