The Bruce murders the Red Comyn 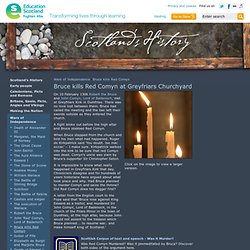 There was no love lost between them. Bruce had called the meeting and the two left their swords outside as they entered the church. A fight broke out before the high altar and Bruce stabbed Red Comyn. When Bruce stepped from the church and told his men what had happened. Roger de Kirkpatrick said ‘You doubt. It is impossible to know what really happened in Greyfriars Kirk that day. Scotland's History - Bruce kills Comyn at Greyfriars Church, Dumfries. February 10 at Greyfriars Kirk « The World of the Blue Bells Trilogy. February 10 is the day Robert Bruce killed John Comyn in front of the altar of Greyfriars Kirk in Dumfries, in 1306. 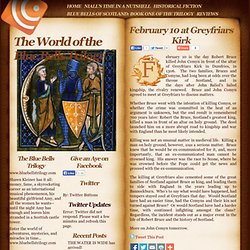 The two families, Bruces and Comyns, had long been at odds over the throne of Scotland, and in the days after John Baliol’s failed kingship, the rivalry renewed. Bruce and John Comyn agreed to meet at Greyfriars to discuss matters. Whether Bruce went with the intention of killing Comyn, or whether the crime was committed in the heat of an argument is unknown, but the end result is remembered 700 years later: Robert the Bruce, Scotland’s greatest king, killed a man in front of an altar on holy ground.

The deed launched him on a more abrupt road to kingship and war with England than he most likely intended. Killing was not an unusual matter in medieval life. The killing at Greyfriars also cemented some of the great families of Scotland against Bruce as king, and leading them to side with England in the years leading up to Bannockburn. More on John Comyn tomorrow. Around Scotland, Wallace and Bruce - Info. Dumfstory4. In the 14th century one of the most important events in Scottish history took place in Dumfries. 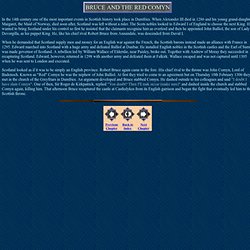 When Alexander III died in 1286 and his young grand-daughter Margaret, the Maid of Norway, died soon after, Scotland was left without a ruler. The Scots nobles looked to Edward I of England to choose the next King. He wanted to bring Scotland under his control so first he insisted that the claimants recognise him as overlord and then he appointed John Balliol, the son of Lady Devorgilla, as his puppet King. He, like his chief rival Robert Bruce from Annandale, was descended from David I. When he demanded that Scotland supply men and money for an English war against the French, the Scottish barons instead made an alliance with France in 1295.

Scotland looked as if it was to be simply an English province. Part Two - Bruce Rathlin 700. It was now the year 1305, and a story almost too dramatic to be believed was about to unfold. 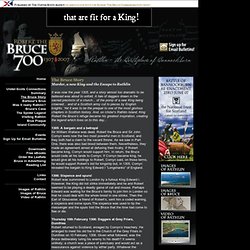 A tale of daggers drawn in the sacred precincts of a church... of the pomp of a new King being crowned... and of a Scottish army cut to pieces by English knights. Yet it was to be the prequel to one of the most glorious chapters in Scottish history. And, on Ulster’s Rathlin Island, King Robert the Bruce’s refuge became his greatest inspiration, creating the legend which lives on to this day... 1305: A bargain and a betrayal Sir William Wallace was dead. 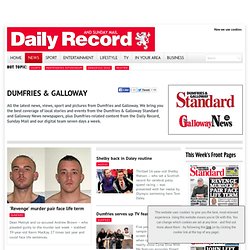 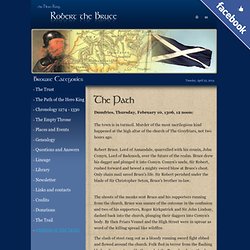 Dumfries and Galloway Hall of Fame. Robert the Bruce, King of Scots. 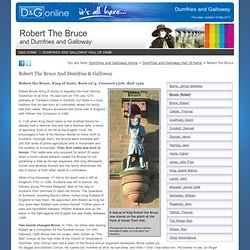 Born 1274, Crowned 1306, died 1329 A statue of King Robert the Bruce now stands on the plinth at the front of Annan Town Hall. Photograph by Annan Bruce Statue Heritage Project Co-ordinator Jim Hawkins Robert Bruce, King of Scots, is arguably the most famous Scotsman of all time. He was born on 11th July 1274, probably at Turnberry Castle in Ayrshire, but there is a local tradition that he was born at Lochmaben where his family had their castle. In 1126 when King David came to the Scottish throne he already held a Norman title and had a Norman wife, a result of spending most of his life at the English Court. When King Alexander 111 fell to his death over a cliff at Kinghorn, Fife, in 1286, Scotland was left in turmoil. 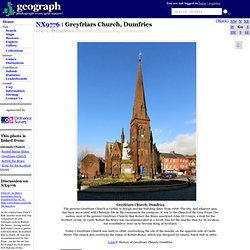 History - The Burgh Church of Dumfries. The present Greyfriars Church is a neo-Gothic building dating from 1868. 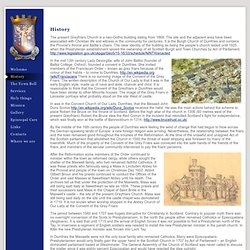 The site and the adjacent area have been associated with Christian life and witness in the community for centuries. It is the Burgh Church of Dumfries and contains the Provost’s throne and Baillie’s chairs. The clear identity of the building as being the people’s church lasted until 1925 when the Presbyterian establishment seized the ownership of all Scottish Burgh and Town Churches by Act of Parliament. In the mid 13th century Lady Devorgilla, wife of John Balliol (founder of Balliol College, Oxford), founded a convent in Dumfries.

She invited members of the Franciscan Order – known as grey friars because of the colour of their habits – to come to Dumfries.