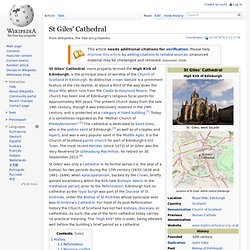 Its distinctive crown steeple is a prominent feature of the city skyline, at about a third of the way down the Royal Mile which runs from the Castle to Holyrood Palace. The church has been one of Edinburgh's religious focal points for approximately 900 years. The present church dates from the late 14th century, though it was extensively restored in the 19th century, and is protected as a category A listed building.[1] Today it is sometimes regarded as the "Mother Church of Presbyterianism".[2] The cathedral is dedicated to Saint Giles, who is the patron saint of Edinburgh,[3] as well as of cripples and lepers, and was a very popular saint in the Middle Ages. It is the Church of Scotland parish church for part of Edinburgh's Old Town.

History[edit] Reformation[edit] Knox preaching at St. St. The effect was only temporary. Religious conflict[edit] St. Giles. History. There is record of a parish church in Edinburgh by the year 854, served by a vicar from a monastic house, probably in England. 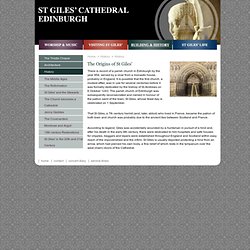 It is possible that the first church, a modest affair, was in use for several centuries before it was formally dedicated by the bishop of St Andrews on 6 October 1243. The parish church of Edinburgh was subsequently reconsecrated and named in honour of the patron saint of the town, St Giles, whose feast day is celebrated on 1 September. That St Giles, a 7th century hermit (and, later, abbot) who lived in France, became the patron of both town and church was probably due to the ancient ties between Scotland and France. According to legend, Giles was accidentally wounded by a huntsman in pursuit of a hind and, after his death in the early 8th century, there were dedicated to him hospitals and safe houses for cripples, beggars and lepers were established throughout England and Scotland within easy reach of the impoverished and the infirm. 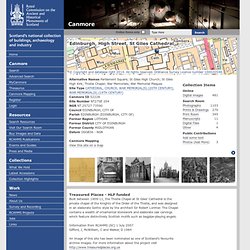 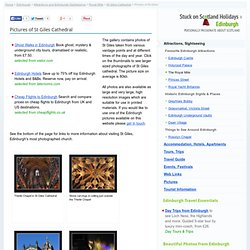 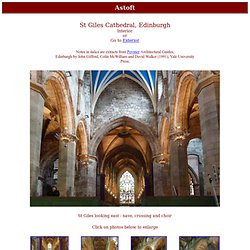 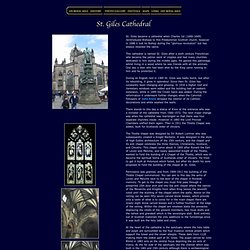 Giles became a cathedral when Charles 1st (1600-1649) reintroduced Bishops to this Presbyterian Scottish church, however in 1688 it lost its Bishop during the "glorious revolution" but has always retained the name. This cathedral is named St. Giles after a sixth century Frenchman who became the patron saint of cripples and had many churches dedicated to him during the middle ages. He gained this patronage whilst living in a wood where he was friends with all the animals.

One day a deer who had been shot by the King came running to him and he protected it. During an English raid in 1385 St. Edinburgh-Royal Mile History Of St.Giles. HISTORY OF THE ST GILES THE CHURCH OF ST. 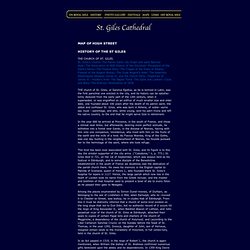 GILES. St. Giles's Church--The Patron Saint--Its Origin and early Norman style--The Renovation of l829 History of the Structure--Procession of the Saint's Relics--The Preston Relic--The Chapel of the Duke of Albany--Funeral of the Regent Murray--The Gude Regent's Aisle" The Assembly AisleDispute between James Vl. and the Church Party--Departure of James Vl. --Haddo's Hole--The Napier Tomb -The Spire and Lantern--Clock and Bells--The Krames--Restoration of 1878. THE church of St. In the year 666 he arrived at Provence, in the south of France, and chose a retreat near Arles; but afterwards, desiring more perfect solitude, he withdrew into a forest near Gardo, in the diocese of Nismes, having with him only one companion, Veredemus, who lived with him on the fruits of the earth and the milk of a hind.

This hind has been ever associated with St. St Giles' Cathedral - Edinburgh. Church of Scotland Discover 1,000 years of history in the heart of Edinburgh. 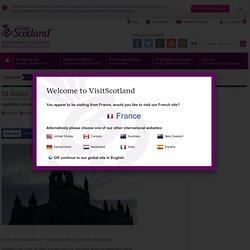 Founded in the 1120s, St Giles' was the church of John Knox during the Reformation and is often referred to as the 'Cradle of Presbyterianism'. Highlights of a visit include our beautiful stained glass windows. Best of Edinburgh *Royal Mile. Best of Edinburgh Attractions David Hume (Philosopher) David Hume statue As we move down into the High Street, you will see the statue of one of the world's greatest philosophers, Edinburgh resident, David Hume (1711 to 1776). 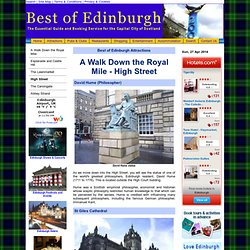 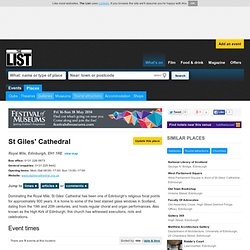 St Giles' Cathedral. St Giles' Cathedral High Street EdinburghEH1 1RE. 'George IV at St Giles's, Edinburgh', Joseph Mallord William Turner. Jenny Geddes. Riot against use of prescribed prayer book The act is reputed to have sparked the riot which led to the Wars of the Three Kingdoms, which included the English Civil War. Background[edit] Title page of Book of Common Prayer, Scotland 1637 Since the early years of the 17th century, the Scottish Church had been established on the same Episcopalian basis as its English cousin, but was far more puritan, both in doctrine and practice.

An dream o sheep... Weel whit a day that wis an nae mistake. The first veesit fae the Pope fer near thirty year. Wha o us kens if we'll still be here the next time he comes roon tae see us? Ah mynd askin masel that question the last time the Pope cam tae see us, tho in ma favour ah wid pynt oot it had taken him near 2000 year tae get aroon tae it at that time. An noo he comes back barely thirty year later? Popes are a bit like buses ah suppose. It's awricht, ah'll be awricht, jist gie me a meenit... Right.

It wis a wee shame tho, that they nivver brocht the auld man up tae see the Auld Toun. Talkin o Saint Giles kirk, me an ma pal Jenny had arrangit tae meet up there efter work this Saiturday efternin a few year ago. We met up aboot fower o'clock, an it wis sic a hot an sunny day we took a wander doon the Gressmairket an sat oot in the sun an knockit back a wheen o ales. Eventually we endit up gaun dancin at the auld Assembly oan the West Bow. Oh but did we no pay fer oor sins in the mornin? The Kirk.