Skara Brae. Skara Brae - Early people - Scotlands History. Skara Brae Prehistoric Village Property Detail. Skara Brae Feature Page on Undiscovered Scotland. Most people have heard of Skara Brae, and most will have seen it in image and in imagination long before visiting. 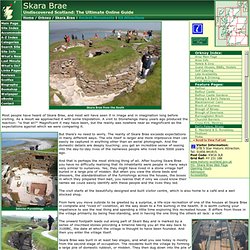 As a result we approached it with some trepidation. A visit to Stonehenge many years ago produced the reaction: "is that all? " Magnificent it may have been, but the reality was nowhere near as magnificent as the expectations against which we were comparing it. But there's no need to worry. Site Record for Skara Brae Skerrabrae; Skea Brae; Bay Of Skaill; Skaill House; Skail BayDetails Details. Alternative Names Skerrabrae; Skea Brae; Bay Of Skaill; Skaill House; Skail BaySite Type SETTLEMENT (NEOLITHIC)Canmore ID 1663Site Number HY21NW 12NGR HY 23125 18745Council ORKNEY ISLANDSParish SANDWICKFormer Region ORKNEY ISLANDS AREAFormer District ORKNEYFormer County ORKNEYDatum OSGB36 - NGR Canmore MappingView this site on a map C14 Radiocarbon DatingC14 radiocarbon dating Treasured Places - HLF funded The Neolithic settlement at Skara Brae consists of drystone structures linked by paved passageways. 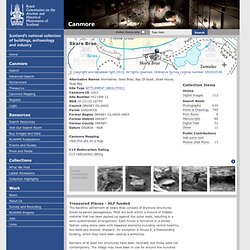 Most are built within a mound of midden material that has been packed up against the outer walls, resulting in a semi-subterranean arrangement. Remains of at least ten structures have been recorded, but these were not contemporary. Information from RCAHMS (SC) 22 June 2007 Ritchie, A 1995 Ritchie, A and Ritchie, G 1998 An image of this site has been nominated as one of Scotland's favourite archive images. 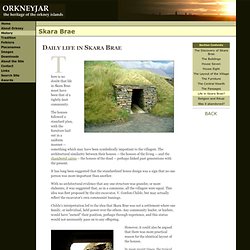 The houses followed a standard plan, with the furniture laid out in a uniform manner — something which may have been symbolically important to the villagers. The architectural similarity between their houses — the houses of the living — and the chambered cairns – the houses of the dead — perhaps linked past generations with the present. It has long been suggested that the standardised house design was a sign that no one person was more important than another.

With no architectural evidence that any one structure was grander, or more elaborate, it was suggested that, as in a commune, all the villagers were equal. Skara brae Neolithic village, Orkney. Skara Brae Orkney's Neolithic Village Skara Brae (HY232188), by the shore of the Bay of Skaill, is virtually unique. 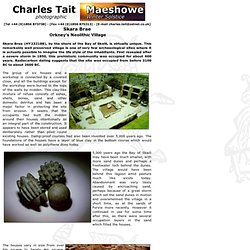 This remarkably well preserved village is one of very few archaeological sites where it is actually possible to imagine the life style of the inhabitants. First revealed after a severe storm in 1850, this prehistoric community was occupied for about 600 years. Radiocarbon dating suggests that the site was occupied from before 3100 BC to about 2600 BC. Neolithic Village Skara Brae Orkney, Scotland - UK Hisotory. Ancient Scotland - Skara Brae Neolithic Village. The neolithic village of Skara Brae lies on the shore of the Bay of Skaill on the west coast of Orkney's Mainland. 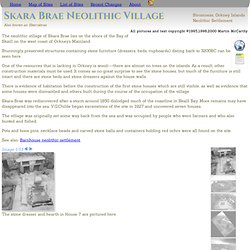 Stunningly preserved structures containing stone furniture (dressers, beds, cupboards) dating back to 3200BC can be seen here. One of the resources that is lacking in Orkney is wood---there are almost no trees on the islands. As a result, other construction materials must be used. It comes as no great surprise to see the stone houses, but much of the furniture is still intact and there are stone beds and stone dressers against the house walls. Skara Brae Ancient Village or Settlement. Also posted on the Barnhouse and Ness of Brodgar site pages as it pertains to all three. 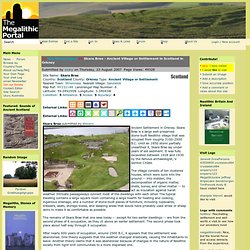 Many thanks to David Morgan for spotting this article. New finds in ‘cathedral’ building reignite age-old question – Stone Age dresser or altar? Posted by Sigurd Towrie on Friday, September 16, 2011; Categorised as: Neolithic Tagged as: Barnhouse, Ness of Brodgar, Skara Brae “A curious feature which is found in [Skara Brae’s] chambers three and six is an arrangement of two stone shelves, erected one above the other and abutting against one of the stone walls. “They remind one of double berths in a ship, but they were used, more probably, for storing pottery utensils in, when not in use, and Professor Childe’s descriptive term – ‘dresser’ – is probably not very wide of the mark” Skerrabrae, by Hugh Marwick. Orkney Pictures Online - Skara Brae. Orkney: Peace with all the trappings of war. The remains of 20th century wartime defences that ring Scapa Flow have a density and variety second to none in Scotland, says Geoffrey Stell, head of architecture at the Royal Commission on the Ancient and Historical Monuments of Scotland and author of a forthcoming book on the subject. 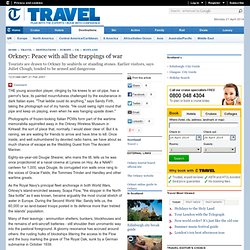 Such military landscapes, he argues, are every bit as complex as medieval settlements and demand the same meticulous levels of survey and interpretation. For casual visitors to Orkney like ourselves, intent perhaps on seabirds or standing stones, these man-made relics of the recent past form a backdrop to nearly every expedition. Taking the ferry to Hoy for the day, we disembark at Lyness to be confronted by a vast Krupps gun among the torpedoes and propeller shafts displayed by the Scapa Flow Visitor Centre, itself an old naval pumping station.

Behind us, not only dolphins but divers - the wet-suited sort - have been frolicking in our wake. For me, Orkney's high "wow" rating rests on moments like this.