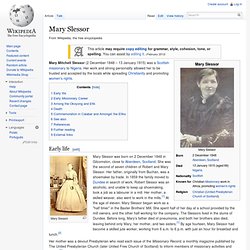 Her work and strong personality allowed her to be trusted and accepted by the locals while spreading Christianity and promoting women's rights. Early life[edit] Mary Slessor Mary Slessor was born on 2 December 1848 in Gilcomston, close to Aberdeen, Scotland. She was the second of seven children of Robert and Mary Slessor. Her mother was a devout Presbyterian who read each issue of the Missionary Record, a monthly magazine published by The United Presbyterian Church (later United Free Church of Scotland) to inform members of missionary activities and needs.[1] Mary Slessor developed an interest in religion and, when a mission was instituted in Quarry Pend (close by the Wishart Church), she volunteered to teach.[2] Mary Slessor was 27 when she heard that David Livingstone, the famous missionary and explorer, had died, and wanted to follow in his footsteps. 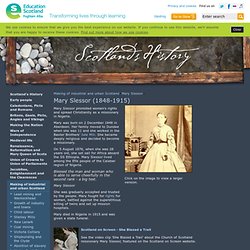 Mary was born on 2 December 1848 in Aberdeen. Her family moved to Dundee when she was 11 and she worked in the Baxter Brothers' Jute Mill. She became deeply religious and decided to become a missionary. On 5 August 1876, when she was 28 years old, she set sail for Africa aboard the SS Ethiopia. Mary Slessor. Mary Slessor : Scotland Magazine Issue 46. The life of a Scots woman and 19th century missionary to Nigeria. 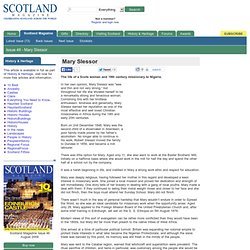 In her own opinion, Mary Slessor was “wee and thin and not very strong,” but throughout her life she showed herself to be a remarkably strong and tenacious woman. Combining this with her limitless enthusiasm, kindness and generosity, Mary Slessor earned her reputation as one of the most effective and well loved Christian missionaries in Africa during the 19th and early 20th centuries. Born on 2nd December 1848, Mary was the second child of a shoemaker in Aberdeen; a poor family made poorer by her father’s alcoholism. No longer able to continue in his work, Robert Slessor moved the family to Dundee in 1859, and became a mill labourer. There was little option for Mary. Angus Heritage - Mary Slessor, Dundee’s African Queen. Leisure and Culture Charitable Trust. Dundee Women's Trail. Mary Slessor 20th Century Originally from Aberdeen and born into a poor family, this young girl arrived in Dundee aged eleven. 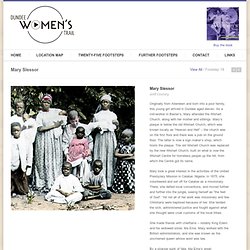 As a mill-worker in Baxter’s, Mary attended the Wishart Church, along with her mother and siblings. Mary’s plaque is below the old Wishart Church, which was known locally as “Heaven and Hell” – the church was on the first floor and there was a pub on the ground floor. The latter is now a sign maker’s shop, which hosts the plaque. The Story of Mary Slessor, The White Queen of Okoyoung, by W. P. Livingstone. Mary Slessor Missionary Calabar Africa. One More River - The Mary Slessor Story - Part 1. Ron Schuler's Parlour Tricks: Mary Slessor. The daughter of an alcoholic shoemaker (born on this day in 1848 in Gilcomston, Scotland), Mary Slessor developed an interest in missionary work as a member of the Wishart Church in Dundee, Scotland. 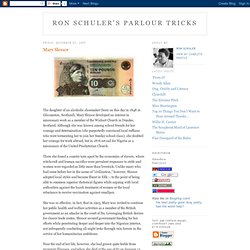 Although she was known among school friends for her courage and determination (she purportedly convinced local ruffians who were tormenting her to join her Sunday school class), she doubted her courage for work abroad, but in 1876 set sail for Nigeria as a missionary of the United Presbyterian Church. There she found a country torn apart by the economies of slavery, where witchcraft and human sacrifice were prevalent responses to strife and women were regarded as little more than livestock. The Mary Slessor Foundation. Mary Slessor was a hard working Scottish mill girl and an unorthodox Sunday School teacher in Dundee in the mid 19th century. 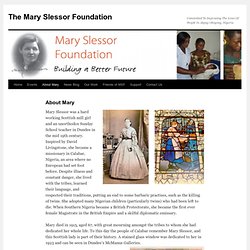 Inspired by David Livingstone, she became a missionary in Calabar, Nigeria, an area where no European had set foot before. Despite illness and constant danger, she lived with the tribes, learned their language, and respected their traditions, putting an end to some barbaric practises, such as the killing of twins. She adopted many Nigerian children (particularly twins) who had been left to die. When Southern Nigeria became a British Protectorate, she became the first ever female Magistrate in the British Empire and a skilful diplomatic emissary. Committed To Improving The Lives Of People In Akpap Okoyong, Nigeria. International Humanist and Ethical Youth Organization - IHEYO. Mary Slessor, Scottish missionary in eastern Nigeria, was born in 1848 in Aberdeen. 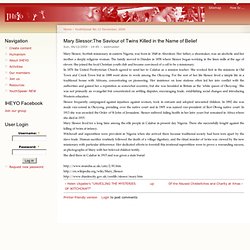 Her father, a shoemaker, was an alcoholic and her mother a deeply religious woman. The family moved to Dundee in 1858 where Slessor began working in the linen mills at the age of eleven. She joined the local Christian youth club and became convinced of a call to be a missionary. In 1876 the United Presbyterian Church agreed to send her to Calabar as a mission teacher. She worked first in the missions in Old Town and Creek Town but in 1888 went alone to work among the Okoyong. Slessor frequently campaigned against injustices against women, took in outcasts and adopted unwanted children. Nigeria History. While in the early days of intrusion of foreign interests into West Africa it was true to say that the flag followed trade, it is also valid to claim that that order of precedence applied equally to the Cross as to trade. 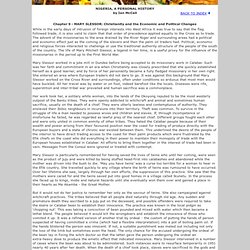 The advent of the missionaries to the area drained by the River Niger and surrounding areas had a political and economic effect just as the coming of the slavers and then the palm oil traders had. Political, economic and religious forces interacted to challenge or use the traditional authority structure of the people of the south of the country. The life of Mary Mitchell Slessor, a legend in her time, is a useful proxy for the influence of the missionaries in the period up to the First World War.

Mary Slessor worked in a jute mill in Dundee before being accepted to do missionary work in Calabar. Her work took her, a solitary white woman, into the lands of the Okoyong reputed to be the most westerly outpost of the Bantu tribes. Mary Slessor -The white Ma of Africa. The white Ma of Africa by Rit Nosotro First Published:: 2003 ( Last updated: 02/25/2011 03:38:43) When Mary Slessor was born on December 2nd, 1848, her parents didn’t know they were raising what would become Africa’s miracle. 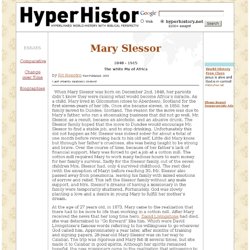 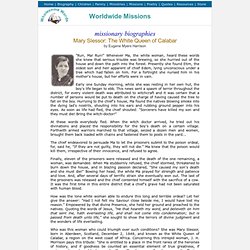 Run! " Whenever Ma, the white woman, heard these words she knew that serious trouble was brewing, so she hurried out of the house and down the path into the forest. Presently she found Etim, the oldest son and heir apparent of chief Edem, lying unconscious under a tree which had fallen on him. Early one Sunday morning, while she was resting in her own hut, the boy's life began to ebb. At these words everybody fled. Streams of Living Water. Read: 2 Corinthians 4:1-18 There is only one missionary, to my knowledge, who has so turned the world upside down that she has earned a place on the back of a Scottish £10 note.

Mary Slessor Scottish missionary to Calabar (Nigeria) Africa - Christian Biography Resources. Journal of Religion in Africa, Vol. 30, Fasc. 1 (Feb., 2000), pp. 45-61. Edinburgh University New College Library: Slessor, Mary. Slessor2of14.pdf. Mary Slessor. Slessor, Mary, Nigeria, Presbyterian. Sixty-six-year-old Mary Mitchell Slessor lay dying in the village of Use Ikot Oku, Nigeria. Feverish, weak, and going in and out of consciousness, she prayed, "O Abasi, sana mi yak" (O God, let me go). Her prayer was granted just before dawn on January 13, 1915. The woman known as eka kpukpru owo (everybody's mother) had lived nearly forty years in Nigeria, but her death was noted around the world, and her influence lives on today. How did Mary Slessor, a petite redhead from the slums of Dundee, Scotland, become a role model for others, even today? How did she come to wield such influence in the land known to her compatriots as the white man's grave?

In 1841 Hope Masterton Waddell, an Irish clergyman serving with the Scottish Presbyterian mission in Jamaica, received a copy of Sir T. The synod in Jamaica sent Waddell as their representative to the Foreign Mission Board in Edinburgh to plead for permission to go to Calabar, near the southeastern coast of present-day Nigeria. Enyong Creek. Slessor, Mary, Nigeria, Presbyterian. An indomitable Scottish Presbyterian who described herself as "wee and thin and not very strong," Mary Slessor lasted over forty years in the malaria-ridden Calabar region of Nigeria, where she was especially active in promoting the dignity of African women. Born on December 2, 1848, near Aberdeen, the second of seven children, Mary's mother was a deeply religious woman, her father a drunken shoemaker.

She was just twenty-eight years of age, with red hair and bright blue eyes, when in 1876 she arrived in Nigeria as a missionary for the United Presbyterian Church. The slave trade had been abolished, but local society had been disrupted by it and by the influx of commerce. Britain had seized Lagos in 1861 and was gradually extending its presence to the interior. Mary soon learned the Efik language and showed an intense interest in local people and their customs. Mary Slessor Tried to Transform Nigeria - 1901-2000 Church History Timeline. In 1914, Mary Slessor, a world-famous missionary to Nigeria, fell so ill that she had to be taken by canoe to hospital. A few weeks later she collapsed again. As she lay semi-conscious she whispered "O God, release me. " She died on this day, January 13, 1915, mourned by thousands of Nigerians.

The Scotswoman had worked among them for thirty-nine years. A harsh childhood prepared Mary for Africa. After she became a Christian, Mary held Bible classes for children whose lives were as bleak as her own. One gang rejected Mary's message, jeering and literally slinging mud at her. On August 5, 1876 she sailed for Africa. Another evil she fought was the treatment of wives after a husband's death. Mary Slessor. When she was eleven years old, Mary started working to help provide for her family. Her wages were soon the primary source of income, working 10 hour days to make ends meet.

Mary Slessor, Scottish missionary to Calabar (Nigeria) Africa - Missionary biography. God uses the most insignificant lives for His glory. He often selects some person from an unknown home and with His redeeming love builds a character that all the ages remember. Humble folk, who can listen to the heavenly Voice calling them to His service, become the great [servants] of God. David Livingstone, who [brought] the Gospel to Africa, was such a person. David went from a Scottish weaver's home to Africa, that he might blaze a Gospel trail across the Dark Continent. MARY SLESSOR - MISSIONARY TO CALABAR. The chattering stopped.

Red-hot designers hail Scots missionary for inspiring African style. THEY are taking the fashion world by storm, dressing celebrities and winning fans among world leaders. But Nigerian-born designers Bunmi Olaye and Francis Udom have a poor Scottish missionary to thank for their success – and their new collection which is set to wow London Fashion Week next month. The Matriarchy Collection is dedicated to the life of Mary Slessor, a Victorian mill girl who left the slums of Dundee to live among the tribes of Calabar, Nigeria. Her life-saving work included rescuing Francis’s great-grandmother from becoming a human sacrifice in the 19th century. Nowtheir 21st-century fashion label Bunmi Koko is paying tribute to the woman who made such a big difference to their native land – and without whom Francis, 33, wouldn’t even be here. Francis,who wore a kilt at the African Fashion Awards earlier this year, said: “I am incredibly proud of my Scottish heritage.