ARO16_Linlithgow. Festival good for the town if staged - Linlithgow Journal and Gazette. Discussions are under way to stage a major music festival in Linlithgow this summer. 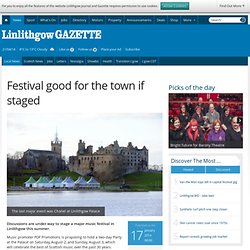 Music promoter PDF Promotions is proposing to hold a two-day ‘Party at the Palace’ on Saturday, August 2, and Sunday, August 3, which will celebrate the best of Scottish music over the past 30 years. Potential bands being lined up to play at The Peel include Simple Minds, Deacon Blue, Wet Wet Wet, Del Amitri, Hue and Cry and others. And a second stage would see more traditional Scottish acts perform, such as Eddie Reader, Julie Fowlis, Phil Cunningham and Ally Bain, as well as emerging acts.

The festival’s aim is to tie in with Scotland’s Homecoming 2014 celebrations. It has already received support from Visit Scotland, Visit West Lothian, West Lothian Council, local business groups, musicians and various media partners. PDF Promotions spokesman Peter Ferguson said: ‘‘Talks have been held with Historic Scotland and we await its decision on whether we can continue or not. Linlithgow. Coordinates: The town's coat of arms shows a black dog, chained to an oak tree, which grows on an island. 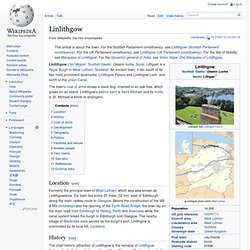 Linlithgow's patron saint is Saint Michael and its motto is St. Michael is kinde to straingers. Location[edit] Formerly the principal town of West Lothian, which was also known as Linlithgowshire, the town lies some 20 miles (32 km) west of Edinburgh along the main railway route to Glasgow. History[edit] Linlithgow travel guide. Linlithgow is a small town in the Central Belt of Scotland, Scotland Linlithgow Palace Get in[edit] By Plane[edit] Linlithgow is only 11 miles/18 km from Edinburgh International Airport [1]. 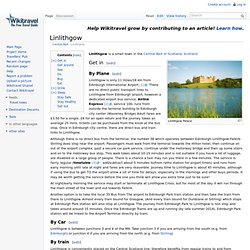 There are no direct public transport links to Linlithgow from Edinburgh airport, however a dedicated airport bus service, Airlink Express [2], service 100, runs from outside the terminal building to Edinburgh city center (Waverley Bridge) Adult fares are £3.50 for a single, £6 for an open return and the journey takes an average 25 mins, tickets can be purchased from the kiosk at the bus stop. Linlithgow (UK Parliament constituency) Linlithgow. Linlithgow. This webcam is located at The Cross - Linlithgow's Town Centre We apologise for the absence of the Linlithgow Cross webcam early in February... 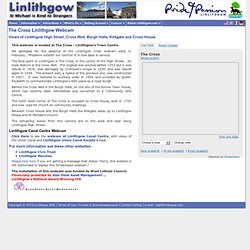 Problems outwith our control! It is now back in service. Linlithgow. It is not clear when Linlithgow was established, however records show that by the early 12th century a small settlement was present which claimed both a mansion and a church. 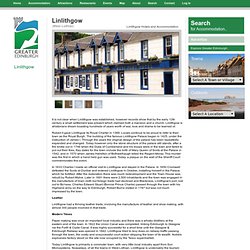 Linlithgow is ahistorians dream boasting hundreds of years worth of war, love and drama to be learned of. Robert II gave Linlithgow its Royal Charter in 1389. Locals continue to be proud to refer to their town as the Royal Burgh. The building of the famous Linlithgow Palace began in 1425, under the instruction of James I. Through the years the original design of the palace has been repeatedly expanded and changed. In 1633 Charles I made an official visit to Linlithgow and stayed in the Palace.

Leather. Linlithgow. By using the map and/or following the directions in italics, you should follow the route in order of the numbers. 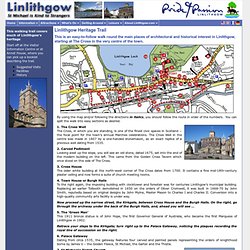 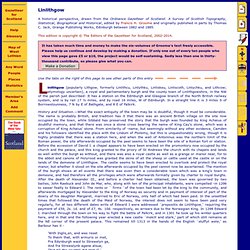 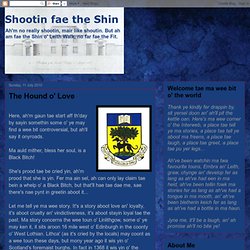 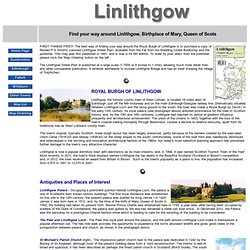 Dramatically situated between Linlithgow Loch and the rising ground to the south, the town was made a Royal Burgh by David I in the early 12th century. Its royal palace (see photograph above) ensured prominence for the town in Scottish history, and, by the 15th and 16th centuries, Linlithgow had reached its period of greatest influence, prosperity and architectural achievement. Linlithgow map - sights, attractions and hotels. Overview of Linlithgow Story, The. Annet House – Linlithgow. LINLITHGOW - Things to see and do - A Visitor's Guide. Annet House Museum and Garden. Www.lucs.org.uk. Linlithgow Gazette. Welcome to Linlithgow Marches Official Website. The Roke And The Row. Linlithgow and Linlithgow Bridge Children's Gala Day. LINLITHGOW BURGH HALLS. Linlithgow Civic Trust. Old Linlithgow: Amazon.co.uk: Bruce Jamieson: 9781840330564. Frequently Bought Together Customers Who Bought This Item Also Bought Product Description Synopsis Illustrated history of Linlithgow. 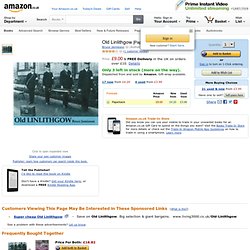 Sell a Digital Version of This Book in the Kindle Store If you are a publisher or author and hold the digital rights to a book, you can sell a digital version of it in our Kindle Store. 4.0 out of 5 stars Most Helpful Customer Reviews 2 of 2 people found the following review helpful By A Customer Format:Paperback Old Linlithgow contains a lot of old photography and extensive information on this Scottish town. St Michael's Church Feature Page on Undiscovered Scotland. Churches dedicated to St Michael have traditionally been placed on high ground and St Michael's Parish Church, Linlithgow, is no exception.

Built on the rise between the town of Linlithgow and Linlithgow Loch, anywhere else this large church would command instant attention over a wide area. But here it shares the stage with its larger neighbour, Linlithgow Palace, which lies immediately to its north. There was probably a church on this site from a very early date. The first documentary evidence dates back to 1138 when the the church was amongst the properties gifted to St Andrews Cathedral by David I. St Michael's Parish Church. The Workhouse in Linlithgow, West Lothian. [Staff] [Inmates] [Records] [Bibliography] [Links] Linlithgow Combination comprised the eight parishes of Abercorn, Bathgate, Bo'ness, Carriden, Kirkliston, Linlithgow, Muiravonside and Whitburn. Carriden later withrew from the Combination. The total population of the member parishes in 1881 was 35,621.

Linlithgow Combination dates from 1851 when its parishes met to discuss the possibility of setting up a joint poorhouse. At that time, about 500 of its then population of 16,000 were destitute. The sandstone building comprised a large rectangular main block, mostly of two storeys but with a three storey central portion. Home - Sangstories - Stories of Scottish Songs. Battle of Linlithgow Bridge. No council money to tackle Linlithgow Loch algae - Latest news. Blackness Castle. James Stewart, Earl of Moray. 7th Earl of Hopetoun. St Magdalene's.