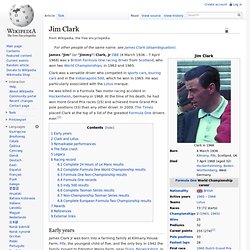 Clark was a versatile driver who competed in sports cars, touring cars and in the Indianapolis 500, which he won in 1965. He was particularly associated with the Lotus marque. He was killed in a Formula Two motor racing accident in Hockenheim, Germany in 1968. At the time of his death, he had won more Grand Prix races (25) and achieved more Grand Prix pole positions (33) than any other driver. Formula 1® - The Official F1® Website. History He never intended to make racing a way of life, let alone become the best in the world in a sport that for him began as farm boy's hobby. 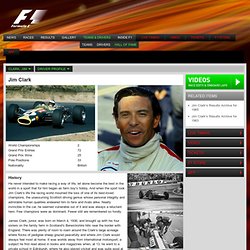 And when the sport took Jim Clark's life the racing world mourned the loss of one of its best-loved champions, the unassuming Scottish driving genius whose personal integrity and admirable human qualities endeared him to fans and rivals alike. Nearly invincible in the car, he seemed vulnerable out of it and was always a reluctant hero. Few champions were as dominant. Fewer still are remembered so fondly. The life of Jim Clark - Motor Sport Magazine Hall of Fame. Taken from the April 1993 issue of Motor Sport By David Tremayne. 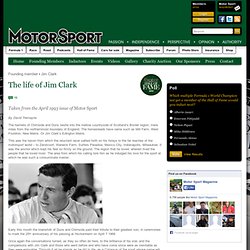 Was Jim Clark the Greatest Racing Driver? - Swarez Art. During a recent conversation with a friend of mine about great historic racing cars and the drivers that made them great we came upon the legend that is Jim Clark. 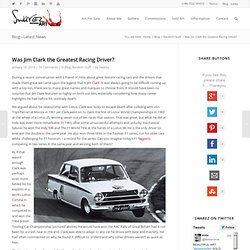 It was always going to be difficult coming up with a top ten, there are so many great names and marques to choose from. It should have been no surprise that Jim Clark featured so highly on both our lists, especially considering how many career highlights he had before his untimely death. We argued about his relationship with Lotus. Clark was lucky to escape death after colliding with von Trips Ferrari at Monza in 1961 yet Clark went on to claim the first of Lotus’ World Championships in 1963 at the wheel of a Lotus 25, winning seven out of ten races that season.

That was great, but what he did at Indy was even more remarkable. Formula One Art & Genius. Scotsman Jimmy Clark may have been the most naturally talented driver to have graced the Formula One stage. 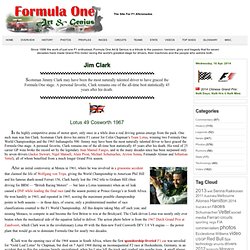 A personal favorite, Clark remains one of the all-time best statistically 45 years after his death. Lotus 49 Cosworth 1967 In the highly competitive arena of motor sport, only once in a while does a real driving genius emerge from the pack. Jim Clark. Introduction and Early Life "Clark came through at the end of first lap of the race so far ahead that we in the pits were convinced that the rest of the field must have been wiped out in an accident" - Eddie Dennis, describing the dominance of Jimmy Clark at Spa-Francorchamps 1967 What more can be said about Jim Clark that hasn't already been said? 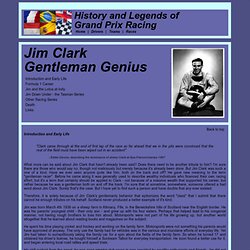 Does there need to be another tribute to him? I'm sure there are those who would say no, though not maliciously but merely because it's already been done. Therefore, it is solely because of Jim Clark's gentlemanly behavior that epitomizes the word "class" that I submit that there cannot be enough tributes on his behalf. Jim Clark Profile - Drivers - GP Encyclopedia - F1 History on Grandprix.com. Encyclopedia Name: Jim Clark Nationality: Great Britain Date of birth: March 4, 1936 - Kilmany, Scotland Date of death: April 7, 1968 - Hockenheim Circuit, Germany Jim Clark, German GP 1965 © The Cahier Archive. 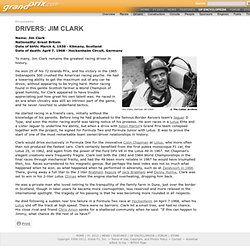 F1 Driver Profile. Jim Clark is a driver who always features near or at the top of any list of the greatest drivers of all time. 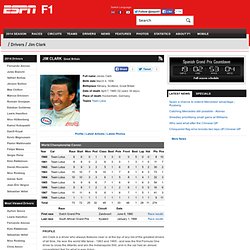 He won the world title twice - 1963 and 1965 - and was the first Formula One driver to cross the Atlantic and win the Indianapolis 500, and in the car had an almost unparalleled feel for what is was doing. Out of the car, Clark was unassuming to the point of anonymity, a shy indecisive character who Peter Warr of Lotus said "could get befuddled through this extraordinary indecisiveness".

Tribute to Jim Clark by Colin Chapman. “I think that his most profound influence, certainly on me and all his close associates, was not his ability as a racing driver, but his success as a man.”Jim Clark O.B.E. 4 March 1936 – 7 April 1968 Tribute to a Great Driver by Colin Chapman. 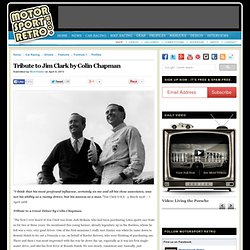 “The first I ever heard of Jim Clark was from Jock McBain, who had been purchasing Lotus sports cars from us for two or three years. He mentioned this young farmer, already legendary up in the Borders, whom he felt was a very, very good driver. The Unforgettable Jim Clark. He was nibbling his nails the first time I saw him – just as they said he would be. 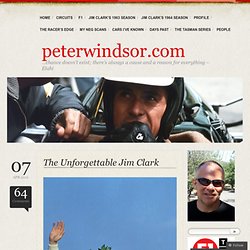 Not absently-mindedly but seemingly with aggression, palm turned upwards, free hand inspecting frequently. He wore black sunglasses, square of frame – Rayban Wayfarers – fawn slacks and no shirt. His shoulders were as broad as a boxer’s, yet he was short, even by my schoolboy standards. And he walked with that amazing twinkle-toe lilt, springing upwards, like a Scots sword-dancer, with every step.

Jackie Stewart did likewise, we noticed – although his feet were splayed outwards. Racing Heroes – Jim Clark. Jim Clark and Colin Chapman at Zandvoort, 1967. All images courtesy of Ford Motor Company. Ask fans of Formula One racing in the 1960s who the best driver of the period was, and you’re likely to get a near-unanimous reply of “Jim Clark.” Even today, many F1 enthusiasts consider the soft-spoken Scotsman to be in the top five Formula One drivers of all time, citing Clark’s uncanny natural talent to drive any car at its absolute limit.

Unlike many of his his peers in the sport, Clark didn’t come from a racing family and didn’t spend his early years coming up through racing’s junior ranks. Born to a sheep farming family in Kilmany, Fife, Scotland, in 1936, Clark’s childhood was spent attending to farm chores with his four sisters. His talent behind the wheel quickly won him admirers, including those with far more means than Clark himself. Jim Clark: The Most Naturally Gifted Formula One Driver of All Time? The legendary Scottish racing driver Jimmy Clark is often overlooked when people list their greatest Formula One drivers of all time. Names like Michael Schumacher, Ayrton Senna, and Juan Manuel Fangio are thrown around with consummate ease but it is rare for Clark to be mentioned among even the top three drivers of all time. Nobody is arguing he was the most successful but some do believe he was the most naturally gifted. 2008 marked 40 years since his tragic death, and this writer wants to make a case for James Clark Junior, the most naturally gifted F1 driver of all time.

He grew up close to the small Fife town of Kilmany as the only son of a farmer and as such, would have had many a chore growing up. Therefore, his father, at first, had little time for his fast paced hobby. Ironically his father eventually said, "make it pay or give it up"—and make it pay he certainly did, and all during the life time of a very proud dad. Clark never won at Monaco, for what reason we’ll never know. 100 Years of Racing. Remember Jim Clark. Sunday April 7th, 1968. It was an April day like any other April day. Dull, overcast with intermittent showers. Jim Clark of Scotland is the youngest world champion - 10.07.63.

Gray stone buildings loomed in the headlights' glow. Suddenly a sickle-horned ram trotted out onto the narrow road. The small sports car swung past the ram, past the barns and cottages and into the courtyard of a massive stone farmhouse. It has been called Edington Mains (Eed-ington) since time out of mind. Keeping a vigil there for almost as long is a ghost known as The White Lady.

Jim Clark's fatal accident. Jim Clark Room, Duns, Scotland. The grave of Racing Driver Jim Clark (C) Kevin Rae. Visit the Jim Clark Memorial. The Jim Clark Room - Duns. The  JIM  CLARK  MEMORIAL  at  HOCKENHEIM. Jimmy Clark - Images. In Pictures: Jim Clark. Thousands pay tribute to racing legend Jim Clark - Transport. The 2013 Jim Clark Rally home of the only closed road rally in the UK. Drivers set for Borders battle on Jim Clark Rally. After a solid start to the 2013 MSA British Rally Championship on gravel in Cumbria, the Culina Palletforce Racing team switches to Tarmac for round two at the Jim Clark Rally next weekend. Famed for being the only closed public road rally on mainland UK, the event will see both team crews race along the fast country lanes around Kelso and Duns in the Scottish Borders. Named in memory of double Formula One world champion Jim Clark, Scotland’s biggest motor rally event will host over 300 cars and crews, across a variety of modern and historic categories, when the action kicks off next Friday.

John MacCrone powers his way through Kielder in the DS3 But, for the Culina Palletforce Racing drivers, the event has got somewhat of a local feel – even though both have extremely limited experience of their CA1 Sport Citroën DS3 rally cars on sealed surfaces. Team-mate Peter Taylor from Carlisle, however, is also on home turf. Peter Taylor interviewed by BBC Radio Cumbria ahead of round 1 Quotes: Fans remember F1 legend Jim Clark at Duns - Other sports. David Coulthard drives Jim Clark's Lotus 25. James 'Jim' Clark, 1936 - 68. Formula One Racing Driver − Harry Benson − B.