James Watt. James Watt. James Watt, FRS, FRSE (30 January 1736 (19 January 1735 O.S.)–25 August 1819)[1] was a Scottish inventor and mechanical engineer whose improvements to the Newcomen steam engine were fundamental to the changes brought by the Industrial Revolution in both his native Great Britain and the rest of the world. 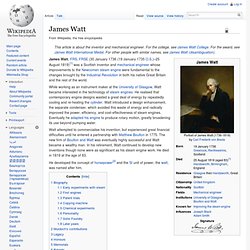 Watt attempted to commercialise his invention, but experienced great financial difficulties until he entered a partnership with Matthew Boulton in 1775. The new firm of Boulton and Watt was eventually highly successful and Watt became a wealthy man. In his retirement, Watt continued to develop new inventions though none were as significant as his steam engine work.

He died in 1819 at the age of 83. He developed the concept of horsepower[2] and the SI unit of power, the watt, was named after him. Biography In 1764, Watt married his cousin Margaret (Peggy) Miller, with whom he had five children, two of whom lived to adulthood: James Jr. (1769–1848) and Margaret (1767–1796). First engines. James Watt. Inventor James Watt Biography. RELATED INFORMATION: Energy History from The Great Idea Finder ON THE BOOKSHELF: A History of Mechanical Inventions by Abbott Payson Usher / Paperback: 450 pages / Dover Pub.; Rev. ed edition (1988) This completely revised and updated classic explores the importance of technological innovation in the cultural and economic history of the West. 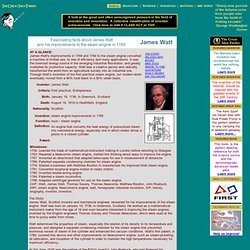 Specific topics include development of technology of textile manufacture from primitive times, water wheels and wind mills, development of clocks and watches, invention of printing, machine tools and quantity production. The History of Science and Technology by Bryan Bunch, Alexander Hellemans / Hardcover: 768 pages / Houghton Mifflin Company; (2004) Highly browsable yet richly detailed, expertly researched and indexed, The History of Science and Technology is the perfect desktop reference for both the science novice and the technologically advanced reader alike.

James Watt (1736-1819) - Online stuff. James Watt was a Scottish engineer most famous for his invention of the separate condenser for steam engines, which made steam power safer, more productive and much more efficient. 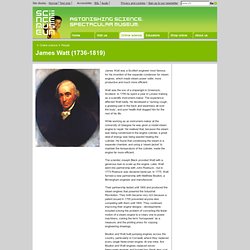 Watt was the son of a shipwright in Greenock, Scotland. In 1755 he spent a year in London training as a scientific instrument-maker. The experience affected Watt badly. He developed a ‘racking cough, a gnawing pain in the back and weariness all over the body’, and poor health that dogged him for the rest of his life. While working as an instrument-maker at the University of Glasgow he was given a model steam engine to repair. Who invented the propeller? Who invented the ship's propeller? James Watt, in 1770, wrote: "Have you ever considered a spiral oar? 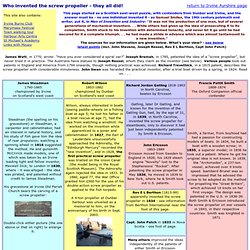 " Joseph Bramah, in 1785, patented the idea of a "screw propeller", but never tried it in practice. The Austrians have statues to Joseph Ressel, whom they claim as the inventor (see below). Various people took out patents in England and America from 1794 onwards, though nothing practical was achieved. Richard Trevethick, in a 1815 patent, describes the screw propeller with considerable minuteness. John Swan was heralded the practical inventor, after a trial boat driven by a spring, in 1824. We look forward to your contribution - if you have any views on the above, please send them in, and we will publish any further information on this page. John Ericsson sources included: www.fact-index.com/j/jo/john_ericsson.html (includes a very full biography) and www.history.rochester.edu/steam/stevens/screw.htm (includes technical drawings from 1828 and 1836).

Latest Points What about John Stevens (1749-1838)? Or Rev. A short History of the Propeller. Last modification of this page: 08.09.03 Due to the increasing amount of SPAM mail, I have to change this e-Mail address regularly. 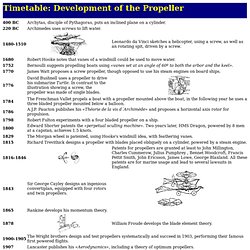 You will always find the latest version in the footer of all my pages. It might take some time until you receive an answer and in some cases you may even receive no answer at all. I apologize for this, but my spare time is limited. If you have not lost patience, you might want to send me a copy of your e-mail after a month or so.This is a privately owned, non-profit page of purely educational purpose. About Propellers. About propellers… James Watt of Scotland is generally credited with applying the first screw propeller to an engine, an early steam engine, beginning the use of a hydrodynamic screw for propulsion. 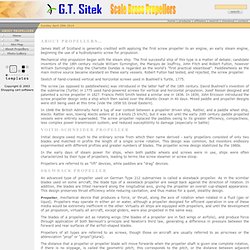 Mechanical ship propulsion began with the steam ship. The first successful ship of this type is a matter of debate; candidate inventors of the 18th century include William Symington, the Marquis de Jouffroy, John Fitch and Robert Fulton, however William Symington's ship the Charlotte Dundas is regarded as the world's "first practical steamboat". Paddlewheels as the main motive source became standard on these early vessels. Robert Fulton had tested, and rejected, the screw propeller. Sketch of hand-cranked vertical and horizontal screws used in Bushnell's Turtle, 1775. What Is a Screw Propeller? 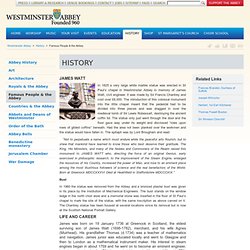 It was made by Sir Francis Chantrey and cost over £6,000. The introduction of this colossal monument into the little chapel meant that the pedestal had to be divided into three pieces and was dragged in over the medieval tomb of Sir Lewis Robessart, destroying the ancient coffin lid. The statue only just went through the door and the floor gave way under its weight and disclosed “rows upon rows of gilded coffins” beneath.