1286 - 1314 When Bruce murdered the Red Comyn in Dumfries, Isabella defied her husband an faither in comin oot in support, even stealin her man's horse tae ride tae Scone tae crown the Bruce, her right as Countess o Fife.

Gettin there a day late she made them dae it again, so's naebody could say it wisnae properly done. Fer this act Longshanks had her pit in a cage an hoisted ower the wa o Berwick Castle fer four years... in aw weathers... four years... four... years... an then pit in a nunnery... *slowly shakes heid...* Isabella MacDuff, Countess of Buchan. Isobel of Fife - Wars of Independence. Isobel of Fife was married to John Comyn, Earl of Buchan. 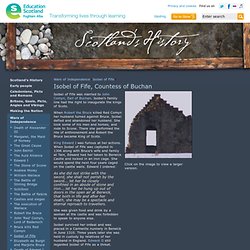 Isobel’s family line had the right to inaugurate the kings of Scots. When Robert the Bruce killed Red Comyn her husband turned against Bruce. Isobel defied and abandoned her husband. She took some of his men and horses, and rode to Scone. There she performed the rite of enthronement and Robert the Bruce became King of Scots. King Edward I was furious at her actions. As she did not strike with the sword, she shall not perish by the sword... let her be closely confined in an abode of stone and iron... let her be hung up out of doors in the open air at Berwick, that both in life and after her death, she may be a spectacle and eternal reproach to travellers. She was given food and drink by a woman at the castle and was forbidden to speak to anyone else. Isobel survived her ordeal and was placed in a Carmelite nunnery in Berwick in June 1310.

Isobel Countess of Buchan. On the 25th of March 1306 Robert de Bruce was crowned King of Scots at Scone Abbey, wearing robes borrowed for the the day from the Archbishop of Glasgow. 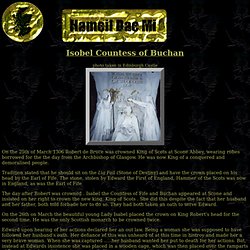 He was now King of a conquered and demoralised people. Tradition stated that he should sit on the Lia Fail (Stone of Destiny) and have the crown placed on his head by the Earl of Fife. SCOTTISH SCRIBBLES: ISABEL MacDUFF (Countess Buchan) COMYN. As promised from the last post I wanted to share with you the heroics of a Scottish woman of the medieval period. 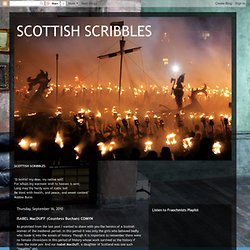 In this period it was only the girls who behaved badly who made it into the annals of history. Though it is important to remember there were no female chroniclers in this period of history whose work survived so the history if from the male pov. And our Isabel MacDuff, a daughter of Scotland was one such “naughty” girl. Isabel was born around 1285 in Scotland to Duncan MacDuff, (7th or 9th Earl of Fife descended from the long line of mormaers of Fife) and Joan de Claire (daughter of Gilbert de Claire who later married the Joan, the sister of Edward I of England). She was the elder of the two children, her brother Duncan most historians believe that he was at least two years younger than her. 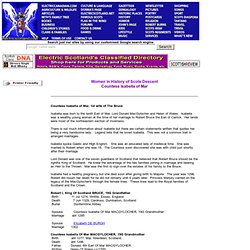 Isabella was a wealthy young woman at the time of her marriage to Robert Bruce the Earl of Carrick. Her lands were most of the northeastern section of Inverness. There is not much information about Isabella but there are certain statements written that quotes her being a very handsome lady. Legend tells that he loved Isabella. Chapter 1. The year was 1306. 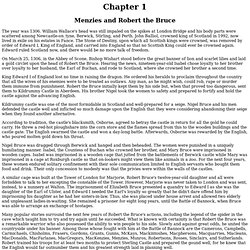 William Wallace's head was still impaled on the spikes at London Bridge and his body parts were scattered among Newcastle-on_tyne, Berwick, Stirling, and Perth. John Balliol, crowned king of Scotland in 1992, now lived in exile on his estates in Fance. The Stone of Destiny, upon which all Scottish kings were crowned, was removed by order of Edward I, King of England, and carried into England so that no Scottish King could ever be crowned again. Edward ruled Scotland now, and there would be no more talk of freedom. On March 25, 1306, in the Abbey of Scone, Bishop Wishart stood before the great banner of lion and scarlet lilies and laid a gold circlet upon the head of Robert the Bruce.

King Edward I of England lost no time in raising the dragon. Kildrummy castle was one of the most formidable in Scotland and well-prepared for a seige. According to tradition, the castle's blacksmith, Osborne, agreed to betray the castle in return for all the gold he could carry. Robert the Bruce: Part 2 Feature Page on Undiscovered Scotland. Isabel Macduff, Countess of Buchan.