Kenneth I 'The Conqueror' Donald I. Domnall mac Ailpín (Modern Gaelic: Dòmhnall mac Ailpein,[1] anglicised sometimes as Donald MacAlpin, and known in most modern regnal lists as Donald I); (812 – 13 April 862) was king of the Picts from 858 to 862. 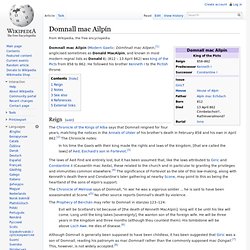 He followed his brother Kenneth I to the Pictish throne. Reign[edit] Constantine I 'The Wine-bountiful' Áed. Giric 'Son of Fortune' Giric mac Dúngail (Modern Gaelic: Griogair mac Dhunghail (born c 832, Scotland),[1] known in English simply as Giric, and nicknamed Mac Rath, ("Son of Fortune");[2] fl. c. 878–889) was a king of the Picts or the king of Alba. 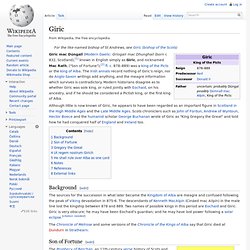 The Irish annals record nothing of Giric's reign, nor do Anglo-Saxon writings add anything, and the meagre information which survives is contradictory. Modern historians disagree as to whether Giric was sole king, or ruled jointly with Eochaid, on his ancestry, and if he should be considered a Pictish king, or the first king of Alba. Background[edit] The sources for the succession in what later became the Kingdom of Alba are meagre and confused following the peak of Viking devastation in 875-6. Eochaid. Eochaid mac Run, known in English simply as Eochaid, may have been king of the Picts from 878 to 889. 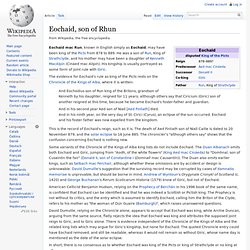 He was a son of Run, King of Strathclyde, and his mother may have been a daughter of Kenneth MacAlpin (Cináed mac Ailpín). His kingship is usually portrayed as some form of joint rule with Giric. The evidence for Eochaid's rule as king of the Picts rests on the Chronicle of the Kings of Alba, where it is written: And Eochodius son of Run king of the Britons, grandson of Kenneth by his daughter, reigned for 11 years; although others say that Ciricium (Giric) son of another reigned at this time, because he became Eochaid's foster-father and guardian.And in his second year Aed son of Niall [Aed Finliath] died.

Malcolm I 'The Dangerous Red' Máel Coluim mac Domnaill (anglicised Malcolm I) (c. 900–954) was king of Scots (before 943 – 954), becoming king when his cousin Causantín mac Áeda abdicated to become a monk. He was the son of Domnall mac Causantín. Since his father was known to have died in the year 900, Malcolm must have been born no later than 901. By the 940s, he was no longer a young man, and may have become impatient in awaiting the throne. Willingly or not—the 11th-century Prophecy of Berchán, a verse history in the form of a supposed prophecy, states that it was not a voluntary decision that Constantine II abdicated in 943 and entered a monastery, leaving the kingdom to Malcolm.[1] 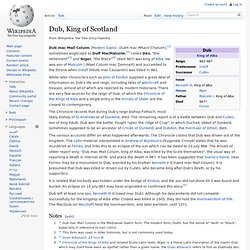 He was son of Malcolm I (Máel Coluim mac Domnaill) and succeeded to the throne when Indulf (Ildulb mac Causantín) was killed in 962. While later chroniclers such as John of Fordun supplied a great deal of information on Dub's life and reign, including tales of witchcraft and treason, almost all of which are rejected by modern historians. Cuilén 'The White' Cuilén mac Ildulb (Modern Gaelic: Cailean),[1] sometimes anglicised as Culen or Colin, and nicknamed An Fionn, "the White"[2] (died 971) was king of Scotland (Alba) from 967 to 971.[3] He was one of three known sons of King Indulf (Ildulb mac Causantín), the others being Amlaíb and Eochaid. 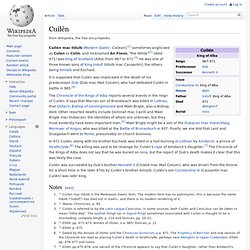 It is supposed that Cuilén was implicated in the death of his predecessor Dub (Dub mac Maíl Coluim), who had defeated Cuilén in battle in 965.[4] The Chronicle of the Kings of Alba reports several events in the reign of Cuilén. It says that Marcan son of Breodalach was killed in Lothian, that Cellach, Bishop of Cennrígmonaid and Máel Brigte, also a Bishop, died. Amlaíb. He is known from the notice of his death in the Annals of Tigernach,[4] which reports that he was killed by Kenneth II of Scotland (Cináed mac Maíl Coluim).[5] His name is not included in any extant king lists, nor is he named as a king in 973 when Kenneth II met with King Edgar the Peaceable at Chester,[6] so that the length of his reign is unknown.[7] Notes[edit] Jump up ^ Amlaíb mac Ilduilb is the Mediaeval Gaelic form. 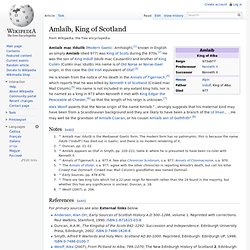 The modern form has no patronymic; this is because the name Ildulb ("Indulf") has died out in Gaelic, and there is no modern rendering of it.Jump up ^ Duncan, pp. 21–22.Jump up ^ Amlaíb appears as Olaf in Smyth, pp. 220–221, table 4, where he is presumed to have been co-ruler with Kenneth II.Jump up ^ Annals of Tigernach, s.a. 977.4. See also Chronicon Scotorum, s.a. 977; Annals of Clonmacnoise, s.a. 970.Jump up ^ The Annals of Ulster, s.a. 977, agree with the other chronicles in reporting Amlaíb's death, but call his killer Cináed mac Domnaill. Kenneth II 'The Fratricide' Constantine III of Scotland.

Constantine, son of Cuilén (Mediaeval Gaelic: Causantín mac Cuiléin; Modern Gaelic: Còiseam mac Chailein), known in most modern regnal lists as Constantine III,[1] (before 971–997) was king of Scots from 995 to 997. 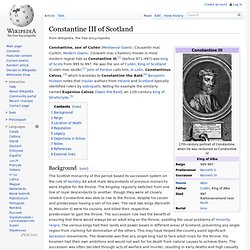 He was the son of Cuilén, King of Scotland (Cuilén mac Iduilb).[2] John of Fordun calls him, in Latin, Constantinus Calvus, [3] which translates to Constantine the Bald.[4] Benjamin Hudson notes that insular authors from Ireland and Scotland typically identified rulers by sobriquets. Kenneth III 'The Chief' Cináed mac Duib (Modern Gaelic: Coinneach mac Dhuibh)[1] anglicised as Kenneth III, and nicknamed An Donn, "the Chief" or "the Brown",[2] (before 967–25 March 1005) was King of Scots from 997 to 1005. 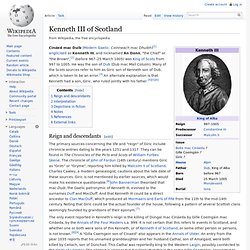 He was the son of Dub (Dub mac Maíl Coluim). Many of the Scots sources refer to him as Giric son of Kenneth son of Dub, which is taken to be an error.[3] An alternate explanation is that Kenneth had a son, Giric, who ruled jointly with his father [4][5][6] Reign and descendants[edit] The only event reported in Kenneth's reign is the killing of Dúngal mac Cináeda by Gille Coemgáin mac Cináeda, by the Annals of the Four Masters s.a. 999. It is not certain that this refers to events in Scotland, and whether one or both were sons of this Kenneth, or of Kenneth II of Scotland, or some other person or persons, is not known.[8][9] A "Gilla Caemgein son of Cinaed" also appears in the Annals of Ulster. Interpretation[edit] One line descended from Kenneth II and was represented by his son Malcolm II.