Haggis. A serving of haggis, neeps, and tatties As the 2001 English edition of the Larousse Gastronomique puts it, "Although its description is not immediately appealing, haggis has an excellent nutty texture and delicious savoury flavour".[1] Haggis is a traditional Scottish dish, considered the national dish of Scotland as a result of Robert Burns' poem Address to a Haggis of 1787. Haggis is traditionally served with "neeps and tatties" (Scots for turnip and potato), boiled and mashed separately and a dram (a glass of Scotch whisky), especially as the main course of a Burns supper. History and etymology[edit] Haggis is popularly assumed to be of Scottish origin, but there is a lack of historical evidence that could conclusively attribute its origins to any one place. For hagese'.Þe hert of schepe, þe nere þou take,Þo bowel noght þou shalle forsake,On þe turbilen made, and boyled wele,Hacke alle togeder with gode persole, Folklore[edit] Modern usage[edit] Drinks[edit] Outside Scotland[edit] Notes.

All About Haggis > Scottish Haggis history: haggis in the Scottish Highlands and the Hebridean haggis. The Haggis has for many hundreds of years, formed an important part of the history and diet of the Scottish People. However, very little is known of this amazing creature, which still roams freely in some parts today. In earlier times, however, there were two species of Haggis. In addition to the Lesser Haggis of today there was a more popular and therefore less numerous Great Haggis.

In the rugged Scottish Highlands where it was able to exist and multiply reasonably successfully, the great Haggis enjoyed a measure of protection. Not only did the hunter find the terrain difficult but the creature's legs had developed to be shorter on one side of its body than on the other, and so were ideal for swiftly running around the side of steep mountains. However, for many years, a solitary specimen of Great Haggis roamed the Central Highlands, successfully evading capture. Its length was almost 1.2 m with a 1.8 m girth.

Andrew B. Macsween - What is Haggis? The origins of haggis are somewhat mysterious, but the dish certainly dates back well before Robert Burns's era. Going back thousands of years, when the hunters returned with their kill, some of the meat could be salted or preserved, but some would need to be eaten straight away. The Famous Scottish Haggis. VisitScotland Food and Drink. What is haggis? 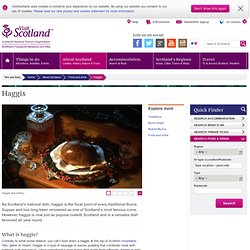 Contrary to what some believe, you can’t hunt down a haggis at the top of Scottish mountains, hills, glens or moors. Haggis is a type of sausage or savory pudding that combines meat with oatmeal, salt and spices. Once considered a poor-man’s dish made from leftovers, haggis is now highly popular and features on menus across the country. What's Under the Kilt? - Haggis. Some people think a haggis looks like a football. They say its difficult to tell whether you should kick it or eat it. After you've eaten it, you wish you'd kicked it. Food - Recipes : Haggis. The Foods of England - Haggis. Haggis "What exactly is it that they put into haggis? 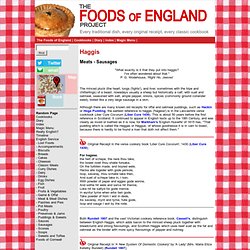 I've often wondered about that. " P. G. Wodehouse, 'Right Ho, Jeeves' The minced pluck (the heart, lungs ('lights'), and liver, sometimes with the tripe and chitterlings) of a beast, nowadays usually a sheep but historically a calf, with suet and oatmeal, seasoned with salt, ample pepper, onions, spices (commonly ground coriander seed), boiled like a very large sausage in a skin. Although there are many known old receipts for offal and oatmeal puddings, such as Hackin or Hogs Pudding, the earliest reference to haggis ('hagese') is in the Lancashire verse cookbook Liber Cure Cocorum (Liber Cure 1430). Original Receipt in the verse cookery book 'Liber Cure Cocorum', 1430 (Liber Cure 1430); For hagese. Original Receipt in 'A New System Of Domestic Cookery' by 'A Lady' (Mrs. US tourists believe haggis is an animal. The enduring myth of the haggis still contributes to the Scottish travel trade, according to a poll yesterday that suggested a third of US visitors believe the delicacy to be an animal. 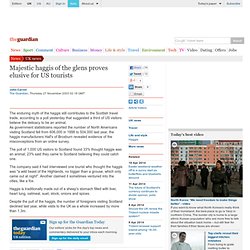 As government statisticians reported the number of North Americans visiting Scotland fell from 606,000 in 1998 to 504,000 last year, the haggis manufacturers Hall's of Broxburn revealed evidence of the misconceptions from an online survey. The poll of 1,000 US visitors to Scotland found 33% thought haggis was an animal; 23% said they came to Scotland believing they could catch one. Haggis - Great Food from Scotland! Making of Haggis. How It's Made Haggis. Macsween - Macsween - Guardians Of Scotland's National Dish. Buy Tradtional Scottish Food Online. Grant's Haggis. As well as our traditional Scottish PremiumHaggis, our haggis products include HaggisCurry, Vegetarian Haggis and limited editionflavours with Venison and Whisky. View our range. Holistech: Haggis Hurl. Bash The Haggis - Haggis Hunt 2012/13 - The Great Scottish Haggis Hunt. Rabbie Burns. Address to a Haggis by Robert Burns. This poem was written by Burns to celebrate his appreciation of the Haggis. 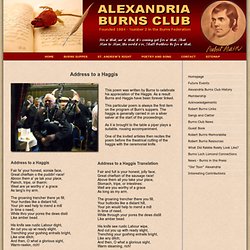 As a result Burns and Haggis have been forever linked. This particular poem is always the first item on the program of Burn's suppers. Robert Burns - Address to a Haggis. Have you listened to Robert Burns’ “Address to a Haggis”? The majestic sound of bagpipes introduces a frugal dish – and so begins a Burns Supper, held on January 25th to celebrate the date of the Scottish poet Robert Burns’ birthday (1759-1796). 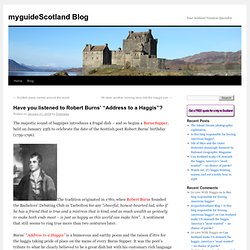 The tradition originated in 1780, when Robert Burns founded the Bachelors’ Debating Club in Tarbolton for any “cheerful, honest-hearted lad, who if he has a friend that is true and a mistress that is kind, and as much wealth as genteely to make both ends meet – is just as happy as this world can make him”.

A sentiment that still seems to ring true more than two centuries later. Burns’ “Address to a Haggis” is a humorous and earthy poem and the raison d’être for the haggis taking pride of place on the menu of every Burns Supper. It was the poet’s tribute to what he clearly believed to be a great dish but with his customary rich language and vivid imagery it creates, he used it as a light-hearted vehicle to proclaim his love of his native land and its people.

Address To A Haggis: To a Haggis - Français. Burns’ Supper Guide. Around the world tributes to Robert Burns are held through the ritual of the Burns' Supper. 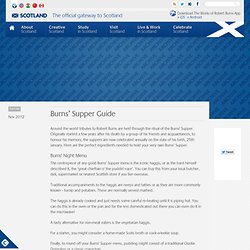 Originally started a few years after his death by a group of his friends and acquaintances, to honour his memory, the suppers are now celebrated annually on the date of his birth, 25th January. Here are the perfect ingredients needed to hold your very own Burns' Supper. Burns' Night Menu The centrepiece of any good Burns' Supper menu is the iconic haggis, or as the bard himself described it, the 'great chieftain o' the puddin'-race'. You can buy this from your local butcher, deli, supermarket or nearest Scottish store if you live overseas. Traditional accompaniments to the haggis are neeps and tatties or as they are more commonly known - turnip and potatoes. The haggis is already cooked and just needs some careful re-heating until it is piping hot.

A tasty alternative for non-meat eaters is the vegetarian haggis. For a starter, you might consider a home-made Scots broth or cock-a-leekie soup.