Girvan. Coordinates: Girvan (Scottish Gaelic:Inbhir Gharbhain) is a burgh in Carrick, South Ayrshire, Scotland, with a population of about 8000. 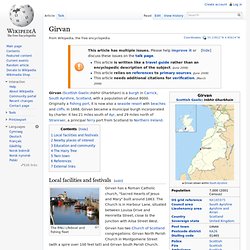 Originally a fishing port, it is now also a seaside resort with beaches and cliffs. Girvan Feature Page on Undiscovered Scotland. Squeezed between the Galloway Hills and the sea, Girvan is the largest town in the district of Carrick and the biggest settlement on the coast between Ayr, 20 miles to its north, and Stranraer, 30 miles to its south. 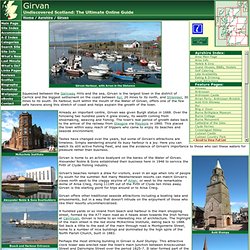 Its harbour, built within the mouth of the Water of Girvan, offers one of the few safe havens along this stretch of coast and helps explain the growth of the town. Already an important centre, Girvan was given Burgh status in 1668. Over the following two hundred years it grew slowly, its wealth coming from shoemaking, weaving and fishing. Girvan - Towns & Villages in Girvan. Home - girvan-online.net. Girvan - About Girvan, South Ayrshire, Scotland. Things to do in Girvan Discover more about Girvan and its surroundings: About Girvan The traditional holiday resort of Girvan dates back to 1668 when it became a municipal burgh incorporated by Charter. Photographs of Girvan. Ports.org.uk / Girvan. Latitude: 55º 15'N Longitude: 04º 50'W Country: Scotland Ownership: South Ayrshire Council Type: Municipal Usage: Leisure, Fishing Address: Macadam House, 34 Charlotte Street, Ayr, KA7 1EA Telephone no: 01465 713648 Website: www.south-ayrshire.gov.uk...n/port.htm There has been a harbour of some sort on the river Girvan (or 'Garvan') for thousands of years. 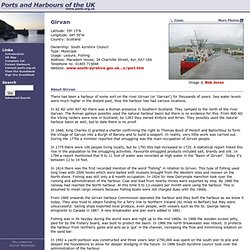 Sea water levels were much higher in the distant past, thus the harbour has had various locations. In 82 AD until 407 AD there was a Roman presence in Southern Scotland. They camped to the north of the river Garvan. In 1668, King Charles II granted a charter confirming the right to Thomas Boyd of Penkill and Ballochtoul to form the Village of Garvan into a Burgh of Barony and to build a seaport. In 1775 there were 100 people living locally, but by 1791 this had increased to 1725. Girvan Lifeboat Station. Ayrshire Paths - Walking, Hiking and Cycling in Ayrshire - Girvan Town, Pinmore, Dow Hill, Byne Hill, Laggan Walk, Path to Barr. Dow Hill Walk at Girvan 3.5km. 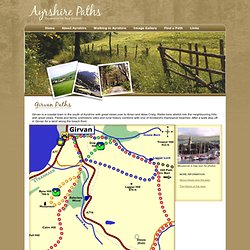 The little energy that is expended in doing this local favourite brings a rich reward. En route a good track climbs over the Ayr to Stranraer railway line and goes past a deep ravine locally known as "Sundown Valley". Scottish Screen Archive - Search - Results. Local legends fire up for Girvan's Festival of light - s1girvan. One of the biggest days in Girvan's annual calendar, the Festival of light comes to town on Saturday 6th November, when the 'Lore and Legend' event offers a unique night of entertainment. 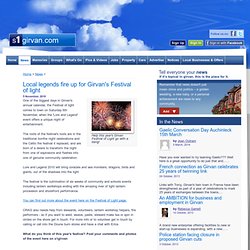 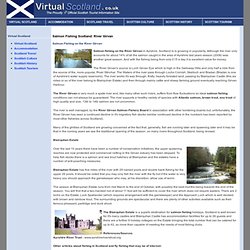 Although the river only accounts for about 14% of all the salmon caught in the area of Ayrshire last years season (2006) was another great season. And with the fishing being from only £15 a day it is excellent value for money. Scotland - Ayrshire - Girvan. Stumpy Tower. Stumpy tower Stumpy Tower is a former gaol in Girvan, South Ayrshire, Scotland. 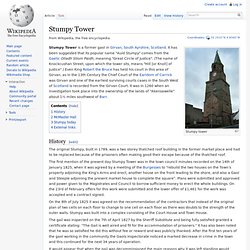 It has been suggested that its popular name "Auld Stumpy" comes from the Gaelic Olladh Stiom Paidh, meaning "Great Circle of Justice".

Sawney Bean. The story appears in The Newgate Calendar, a crime catalogue of the notorious Newgate Prison in London. 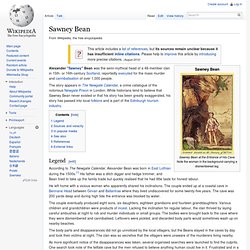 While historians tend to believe that Sawney Bean never existed or that his story has been greatly exaggerated, his story has passed into local folklore and is part of the Edinburgh tourism industry. Legend[edit] According to The Newgate Calendar, Alexander Bean was born in East Lothian during the 1500s.[1] His father was a ditch digger and hedge trimmer, and Bean tried to take up the family trade but quickly realised that he had little taste for honest labour. He left home with a vicious woman who apparently shared his inclinations. The couple ended up at a coastal cave in Bennane Head between Girvan and Ballantrae where they lived undiscovered for some twenty-five years. 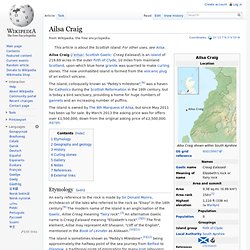 The now uninhabited island is formed from the volcanic plug of an extinct volcano. The island, colloquially known as "Paddy's milestone",[6] was a haven for Catholics during the Scottish Reformation in the 16th century, but is today a bird sanctuary, providing a home for huge numbers of gannets and an increasing number of puffins. Ailsa Craig.