Ewan McGregor. Early life[edit] Born in the Royal Infirmary in Perth, Scotland, McGregor was brought up in the nearby small town of Crieff, where he attended the independent Morrison's Academy. 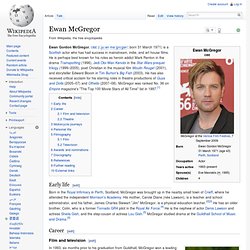 His mother, Carole Diane (née Lawson), is a teacher and school administrator, and his father, James Charles Stewart "Jim" McGregor, is a physical education teacher.[2][3] He has an older brother, Colin, who is a former Tornado GR4 pilot in the Royal Air Force.[4] He is the nephew of actor Denis Lawson and actress Sheila Gish, and the step-cousin of actress Lou Gish.[5] McGregor studied drama at the Guildhall School of Music and Drama.[5] Career[edit] New Again: Ewan McGregor. Happy Burns Night! 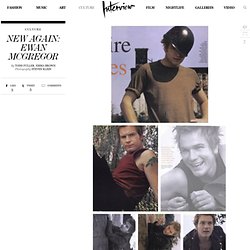 For those of you who don't know, Burn's Night is a Scottish tradition, a dinner held on the birthday of Romantic poet Robert Burns (Jan. 25), the man who wrote (the words to) "Auld Lang Syne" and a Scottish national treasure. Traditional celebrations involve the recitation of Burns' poetry (including Auld Lang Syne as a farewell), toasting, eating haggis, drinking Scotch, and just generally lots of lovely stereotypical Scottish things that would warm the cockles of any eager tourist's hearts. In the spirit of this festivity, we decided to revisit and interview with one of our favorite Scots, Ewan McGregor. We considered Tilda Swinton, but we ran into her last night and she said she wasn't planning on celebrating the holiday (her boyfriend left his kilt back in England), so Ewan it is! Ewan McGregor: 'The Impossible is my first film about being a parent' Six months ago, Ewan McGregor strolled incognito down the Croisette at the tail end of the Cannes film festival. 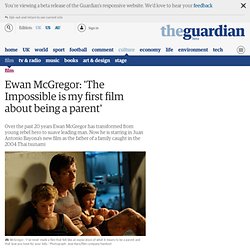 Your resource for all things ewan mcgregor. 'I feel bad for Roman Polanski's kids. Tony Blair? I don't know how he lives with himself': Ewan McGregor speaks out. By Martyn Palmer UPDATED: 16:47 GMT, 1 April 2010 But the real controversy arose in post-production, when the film's 76-year-old director Roman Polanski was arrested on a warrant dating back to his 1977 trial for unlawful sex with a 13-year-old girl. 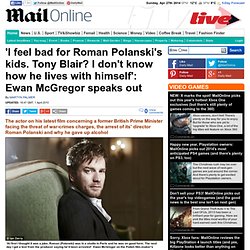 McGregor was in London putting some finishing touches to the sound for The Ghost when he heard the news. 'At first I thought it was a joke,' he says. Ewan McGregor profile: news, photos, style, videos and more – HELLO! Online. "One minute I was lying on the floor with a syringe in my arm, then I got married, then I was standing in this trailer with a wig and a top hat and leather gloves on," says actor Ewan McGregor describing his hectic film schedule. 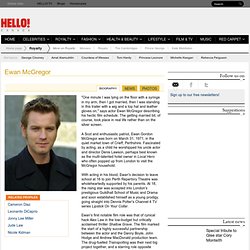 The getting married bit, of course, took place in real life rather than on the silver screen. Ewan McGregor. Shallow Grave. The production was funded by Channel 4 television and the film was distributed by PolyGram Filmed Entertainment who, as with their other releases, generated a large amount of publicity for the film on a limited budget. 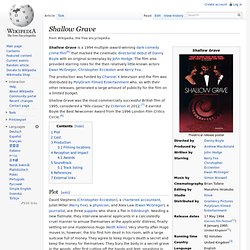 Shallow Grave was the most commercially successful British film of 1995, considered a "90s classic" by Criterion in 2012.[7] It earned Boyle the Best Newcomer Award from the 1996 London Film Critics Circle.[8] Plot[edit] Unknown to the conspirators, Hugo, who evidently had criminal connections, is being sought by two ex-accomplices or thugs, who brutally kill informers along the way after finding out all they know about Hugo and the money. The flat below Alex, David, and Juliet's is broken into, causing them much apprehension and anxiety. Shallow Grave. Shallow Grave (1994. Trainspotting (film) The film has been ranked 10th by the British Film Institute (BFI) in its list of Top 100 British films of all time. 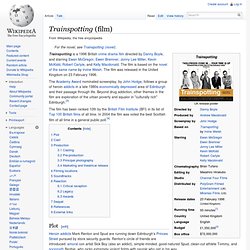 In 2004 the film was voted the best Scottish film of all time in a general public poll.[4] Heroin addicts Mark Renton and Spud are running down Edinburgh's Princes Street pursued by store security guards. Renton's circle of friends are introduced: amoral con artist Sick Boy (also an addict), simple-minded, good-natured Spud, clean-cut athlete Tommy, and sociopath Begbie, who picks extremely violent fights with people who get in his way.

Renton decides to quit heroin and buys opium rectal suppositories from Mikey Forrester to ease the transition. After this final hit (and a violent spell of diarrhea caused by cessation of heroin) he locks himself into a cheap hotel room to endure withdrawal. Sick Boy, Spud and Renton start using heroin again. Renton and Spud are caught stealing from a bookshop and arrested. McGregor read books about crack and heroin to prepare for the role. Trainspotting. Trainspotting (1996. The Pillow Book (film) The Pillow Book is a 1996 film by British director Peter Greenaway, which stars Vivian Wu as Nagiko, a Japanese model in search of pleasure and new cultural experience from various lovers. 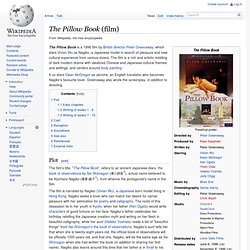 The film is a rich and artistic melding of dark modern drama with idealized Chinese and Japanese cultural themes and settings, and centers around body painting. It co-stars Ewan McGregor as Jerome, an English translator who becomes Nagiko's favourite lover. Greenaway also wrote the screenplay, in addition to directing. The film's title, "The Pillow Book", refers to an ancient Japanese diary, the book of observations by Sei Shōnagon (清少納言?) , actual name believed to be Kiyohara Nagiko (清原 諾子?)

The film is narrated by Nagiko (Vivian Wu), a Japanese born model living in Hong Kong. The publisher arranges Nagiko's wedding to his young apprentice. Hiding from her husband, Nagiko moves to Hong Kong. The Pillow Book (1996. Brassed Off. Brassed Off (1996. A Life Less Ordinary. Plot[edit] Celine Naville (Diaz) is the spoiled twenty-something daughter of a wealthy businessman. 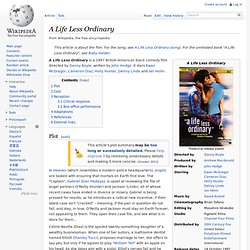 When one of her suitors, a loathsome dentist named Elliott (Stanley Tucci), proposes marriage to her, she offers to say yes, but only if he agrees to play "William Tell" with an apple on his head. As she takes aim with a pistol, Elliot's nerves fail and he moves to stop her, spoiling her aim and causing a non-fatal head wound. A Life Less Ordinary (1997. Star Wars Episode I: The Phantom Menace. Lucas began production of this film after he had concluded that the science of film special effects had advanced to the level of what he wanted for his fourth film in the saga. 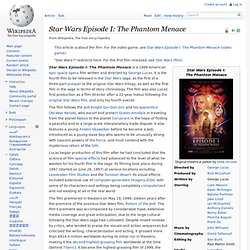 Its filming took place during 1997 (started on June 26, 1997) at various locations including Leavesden Film Studios and the Tunisian desert. Its visual effects included extensive use of computer-generated imagery (CGI), with some of its characters and settings being completely computerized and not existing at all in the real world. Star Wars: Episode I - The Phantom Menace (1999. Moulin Rouge! Moulin Rouge! (2001. Star Wars Episode II: Attack of the Clones. Star Wars Episode II: Attack of the Clones is a 2002 American epic space opera film directed by George Lucas and written by Lucas and Jonathan Hales. It is the fifth film to be released in the Star Wars saga and the second in terms of the series's internal chronology. At 142 minutes, it is the longest film in the series. Released on May 16, 2002, Attack of the Clones was one of the first motion pictures to be shot completely on a high definition digital 24-frame system.

It garnered mostly mixed to positive reviews from critics[2] and was a financial success; however, it also became the first Star Wars film to be internationally out-grossed in its year of release. Plot[edit] Obi-Wan travels to Kamino, where he discovers that an army of clone troopers is being secretly produced for the Republic, using a bounty hunter named Jango Fett as their genetic template. Cast[edit] E! Production[edit] Writing[edit] Star Wars: Episode II - Attack of the Clones (2002. Young Adam (film) After finding Cathie's body, Joe and Les go to a local pub to play darts.

Joe leaves Les behind and returns to the barge, where Ella succumbs to his advances. Not wanting to disturb the sleeping Jim, the two engage in sex on the towpath. It proves to be the first of many such encounters they enjoy whenever they can find a few moments away from Les. In the past, Joe meets Cathie on a beach and the two soon are living together. He aspires to be a writer and spends his days banging on a battered typewriter while she works to support them. Young Adam (2003. Star Wars Episode III: Revenge of the Sith.