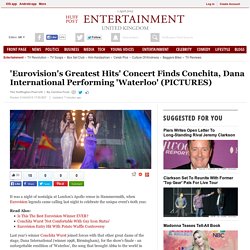 Read Also: Last year's winner Conchita Wurst joined forces with that other great dame of the stage, Dana International (winner 1998, Birmingham), for the show's finale - an unforgettable rendition of 'Waterloo', the song that brought Abba to the world in 1974. Other guests included Loreen, triple winner Johnny Logan, Rosa Lopez and those fine men of Finland, Lordi. Also on stage were 1994 interval show-stealers Riverdance. Triple winner Johnny Logan returned to the stage last night The night comprised a special concert compromising some of the best songs from the history of the competition, in a show to be broadcast across Europe and in Australia. 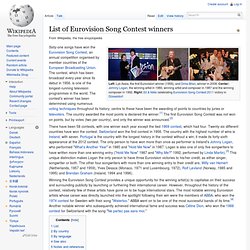 The contest, which has been broadcast every year since its debut in 1956, is one of the longest-running television programmes in the world. The contest's winner has been determined using numerous voting techniques throughout its history; centre to these have been the awarding of points to countries by juries or televoters. The country awarded the most points is declared the winner.[1] The first Eurovision Song Contest was not won on points, but by votes (two per country), and only the winner was announced.[2] List[edit] Notes The United Kingdom has finished second fifteen times at Eurovision (most recently in 1998), more than any other country.

By country[edit] Map showing each country's number of Eurovision wins up to and including 2013. Years in italics indicate joint wins. By language[edit] See also[edit] Notes and references[edit] [edit] 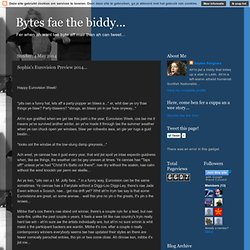 *pits oan a funny hat, lets aff a party-popper an blaws a...* er, whit dae ye cry thae things ye blaw? Party-blawers? *shrugs, an blaws yin in yer face onyway.. Ah'm aye gratified when we get tae this pairt o the year, Eurovision Week, cos tae me it means ye've survived anither winter, an ye've made it through tae the summer weather when ye can chuck open yer windaes, blaw yer cobwebs awa, an gie yer rugs a guid beatin... *looks oot the windae at the low-slung damp greyness Ach weel, ye cannae hae it guid every year, that wid jist spoil ye intae expectin guidness when, like aw things, the weather can be gey uneven at times. An ye ken, *pits oan a I. Mibbe that's cos there's nae stand oot winner, there's a couple vyin fer a lead, but nae sure-fire, unlike the past couple o years. Anyhoo, oantae the previews an predictions. In Semi-Final 2 ah'm hopin that Israel, Lithuania, Belarus, Macedonia an Slovenia get their mairchin orders. 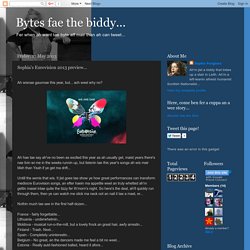 First ever Eurovision contestant Jetty Paerl passes away. After a long career with its heyday in the 1950s and 60s, Dutch singer Jetty Paerl sadly passed away in Amstelveen on Thursday the 22nd of August. 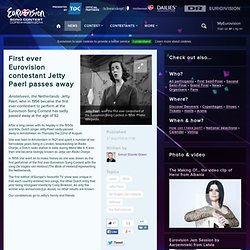 She was born in Amsterdam in 1921 and spent a number of her formidable years living in London, broadcasting on Radio Oranje, a Dutch radio station in exile during World War II. It was then she became lovingly known as Jetje van Radio Oranje. In 1956 she went on to make history as she was drawn as the first performer of the first ever Eurovision Song Contest with the song De Vogels van Holland (The Birds of Holland) representing the Netherlands. The first edition of Europe's favourite TV show was unique in that each country entered two songs, the other Dutch entry that year being Voorgoed Voorbij by Corry Brokken. As only the winner was announced (Lys Assia), no other results are known. Meanwhile In Scotia sur Twitter : "Thank God Russia didn't win. The campest night of the year in Moscow? Awkward! #Eurovision2015.