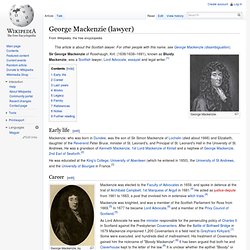 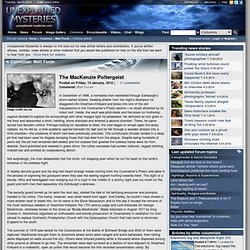 Seeking shelter from the night’s downpour he staggered into Greyfriars Kirkyard and broke into one of the old mausoleums in the Covenanter’s Prison section—no doubt attracted by its intact roof. Inside, the vault was pitch-black and the brave (or foolhardy) vagrant decided to explore his surroundings with what meagre light he possessed. He removed an iron grate in the floor and descended a short, twisting, stone staircase and entered a second chamber. 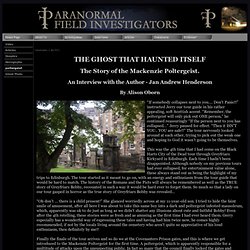 An Interview with the Author - Jan Andrew Henderson By Alison Oborn “If somebody collapses next to you…. Don’t Panic!!” Instructed Jerry our tour guide in his rather appealing, soft Scottish accent. Ghost Blooms: In Search Of Bloody Mackenzie! In Search Of Bloody MackenzieAnd The Ghost Of Greyfriars Greyfriars Churchyard in Edinburgh has a long history of hauntings and a walk around its old stones and mausoleums can be a beautiful and scarey experience! 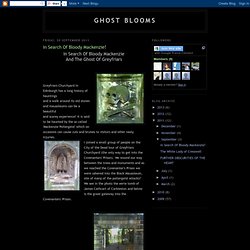 It is said to be haunted by the so called 'Mackenzie Poltergeist' which on occasions can cause cuts and bruises to visitors and other nasty injuries. I joined a small group of people on the City of the Dead tour of Greyfriars Churchyard (the only way to get into the Covenanters' Prison). We wound our way between the trees and monuments and as we reached the Covenanter's Prison we were ushered into the Black Mausoleum, site of many of the poltergeist attacks! 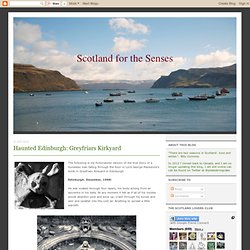 Edinburgh. December, 1998: Boys avoid jail for 'violating' tomb and beheading corpse. Two teenagers who forced their way into the burial chamber of one of Scotland's most brutal historical figures and cut the head from a corpse were sentenced to probation at court in Edinburgh yesterday. 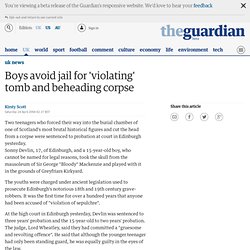 Sonny Devlin, 17, of Edinburgh, and a 15-year-old boy, who cannot be named for legal reasons, took the skull from the mausoleum of Sir George "Bloody" Mackenzie and played with it in the grounds of Greyfriars Kirkyard. The youths were charged under ancient legislation used to prosecute Edinburgh's notorious 18th and 19th century grave-robbers. It was the first time for over a hundred years that anyone had been accused of "violation of sepulchre".

At the high court in Edinburgh yesterday, Devlin was sentenced to three years' probation and the 15-year-old to two years' probation. The judge, Lord Wheatley, said they had committed a "gruesome and revolting offence". The court had heard how the youths caused around £10,000 worth of damage during the incident on June 30 last year.

Teenager 'simulated sex with head' The 15-year-old girl, who cannot be named for legal reasons, also told the High Court in Edinburgh that Sonny Devlin, 17, was "chucking the head around". 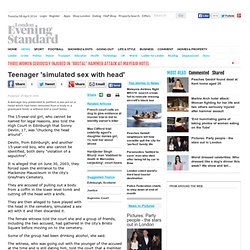 Devlin, from Edinburgh, and another 15-year-old boy, who also cannot be identified, both deny "violation of a sepulchre". It is alleged that on June 30, 2003, they forced open the entrance to the Mackenzie Mausoleum in the city's Greyfriars Cemetery. They are accused of pulling out a body from a coffin in the lower level tomb and cutting off the head with a knife. They are then alleged to have played with the head in the cemetery, simulated a sex act with it and then discarded it.