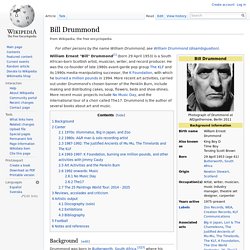 He was the co-founder of late 1980s avant-garde pop group The KLF and its 1990s media-manipulating successor, the K Foundation, with which he burned a million pounds in 1994. More recent art activities, carried out under Drummond's chosen banner of the Penkiln Burn, include making and distributing cakes, soup, flowers, beds and shoe-shines. More recent music projects include No Music Day, and the international tour of a choir called The17. Drummond is the author of several books about art and music. Background[edit] Career[edit] 1970s: Illuminatus, Big in Japan, and Zoo[edit] 1980s: A&R man & solo recording artist[edit] Drummond was "obviously very sharp," said WEA chairman Rob Dickens, "and he knew the business. The KLF. The KLF (also known as The Justified Ancients of Mu Mu, The Timelords and other names) were one of the seminal bands of the British acid house movement during the late 1980s and early 1990s.[4] With The KLF's profits, Drummond and Cauty established the K Foundation and sought to subvert the art world, staging an alternative art award for the worst artist of the year and burning one million pounds sterling. 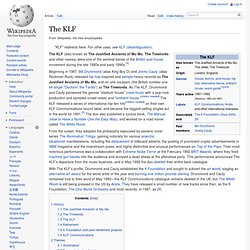 Drummond and Cauty remained true to their word of May 1992—the KLF Communications catalogue remains deleted in the UK, but The White Room is still being pressed in the US by Arista. They have released a small number of new tracks since then, as the K Foundation, The One World Orchestra and most recently, in 1997, as 2K. History[edit] KLF - a melody from a past life keeps pulling me back. KLF & Tammy Wynette - Justified and Ancient. The KLF - Last Train to Trancentral. KLF ~ What Time Is Love? (European Version) Zoo Records. Fire Escape in the Sky had the catalogue number Zoo Two, while To the Shores of Lake Placid had Zoo Four. 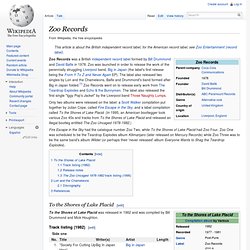 Zoo One was scheduled to be the Teardrop Explodes album Kilimanjaro (later released on Mercury Records) while Zoo Three was to be the same band's album Wilder (or perhaps their 'never released' album Everyone Wants to Shag the Teardrop Explodes). To the Shores of Lake Placid[edit] To the Shores of Lake Placid was released in 1982 and was compiled by Bill Drummond and Mick Houghton. 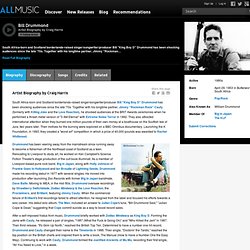 Together with his longtime partner, Jimmy "Rockman Rock" Cauty (formerly with Killing Joke and the Love Reaction), he shocked audiences at the BRIT Awards ceremonies when he performed a thrash metal version of "3 AM Eternal" with Extreme Noise Terror in 1992. They also attracted international attention when they burned one million pounds of their own money at a boathouse on the Scottish Isle of Jura, two years later. Their motives for the burning were explored on a BBC Omnibus documentary. Launching the K Foundation, in 1993, they created a "worst art" competition in which a prize of 40,000 pounds was awarded to Rachel Whitbread. Bill Drummond – Free listening, concerts, stats, & pictures at Last. The17. Bill Drummond. Preview: Friday 20 April 5.30 pm – 8 pm Bill Drummond invites us to explore Sheffield through sound. 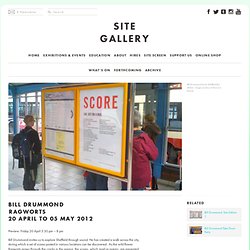 He has created a walk across the city, during which a set of scores posted in various locations can be discovered. As the wild flower Ragworts grows through the cracks in the paving, the scores, which read as poems, are presented as short-lived one off works, which after a few days become scruffy and worn. The walks start from Site Gallery where the scores are exhibited in their entirety. Look out for the scores being posted in and around Sheffield prior the exhibition opening. On Saturday 21 April Bill Drummond wil be giving a walking and talking lecture (Please note; tickets are now sold out). Bill Drummond’s Ragworts has been commissioned by Sensoria Festival in collaboration with Site Gallery Further information on Sensoria 2012 visit www.2012.sensoria.org.uk.

At The Age Of 59, By Bill Drummond. This picture of the author holding a mallet and a sprig of heather was taken on the backbone of England, Froggatt Edge, Derbyshire A couple of months ago I was asked if I would be interested in curating / presenting a day at the radio station Resonance FM in May this year. 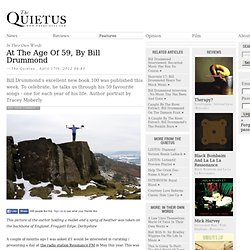 This was to be part of their celebrations for them being on air for the last ten years. In theory I support what Resonance FM seem to stand for so I responded in the positive. As for what I would do with my 24 hours was a little bit harder to figure out. But by the time the kettle boiled I knew exactly what I wanted to do. I am in the process of building 40 beds out of wood at various locations around the world. So, I thought, why not make a bed live on the radio and I can raffle it off on air. Bill Drummond rejects recorded music in favour of 17-person choirs. Standing in a darkened art gallery in Derby, the manager of the local branch of McDonald's looks confused. 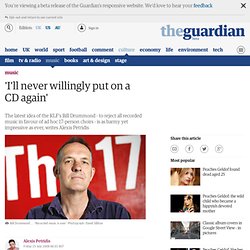 He's called Lee, and he's a smart bloke, keen to impress on me that he's a Guardian reader, and old enough to remember a time when the conceptual artist who has assembled him and 16 of his co-workers here today wasn't a conceptual artist: the brief but spectacular era when Bill Drummond was one half of the biggest-selling singles band in the world, the KLF, who made No 1 in 18 countries with a single on which Tammy Wynette sang about the Illuminati and ice cream vans; and the period before that when Drummond was a record company man, band manager and the subject of much music press debate about whether he was a genius or just a headcase.

Nevertheless, Lee admits, he's not entirely certain why he, and indeed everyone else is here. "Why does there have to be 17 of us? "