Zombie Britain « By Mike Small A report out today confirms what has motivated the independence movement for years: the realisation that Britain is an archaic, centralised society based on privilege and the hereditary principle that closes doors to the many and paves the way for the few. 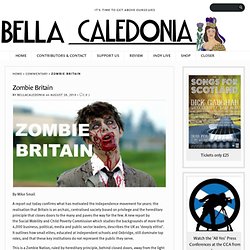 A new report by the Social Mobility and Child Poverty Commission which studies the backgrounds of more than 4,000 business, political, media and public sector leaders, describes the UK as ‘deeply elitist’. It outlines how small elites, educated at independent schools and Oxbridge, still dominate top roles, and that these key institutions do not represent the public they serve. This is a Zombie Nation, ruled by hereditary principle, behind closed doors, away from the light of day and the honesty of open and equal competition based on merit. The Game Changer Within « By Mike Small Everyone waiting for a game-changer, or Darling getting a pasting would be disappointed. 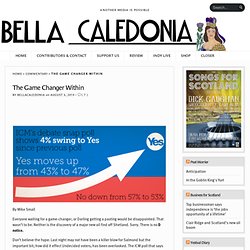 That wasn’t to be. Commonwealth Calendar of Independence « Robert Burns for Independence « By Patrick Scott Hogg, author of The Patriot Bard and The Canongate Burns (with Andrew Noble). 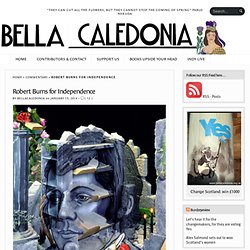 In this article I show the unbound Scottish patriotism of Robert Burns and argue he would have been a leading voice of the Yes Campaign. Although there will always be those who will toast an anodyne, simplistic Kailyard grass-chewing peasant ‘Burns’ who is an abstract, universal white knight of ‘friendship’ the world o’er, this out-of-context unhistorical ‘Burns’ never did exist.

The real poet was a revolutionary republican of nationalist sentiment with passionate egalitarian views; he was anti-war, anti-imperialist, anti-slave, detested corruption in politics with vehement outrage, wished to see the overthrow of the Feudal system and believed in the rights and political suffrage of the common people. Burns was, as Thomas Crawford has shown, the quintessential political poet par excellence. The poet detested corruption in politics, local and national. Why the Debate on Scottish Independence Might Be More Interesting Than You Think? « By David Greig Recently I’ve noted comments from friends bemoaning the ‘quality of the debate’ around Scottish Independence. 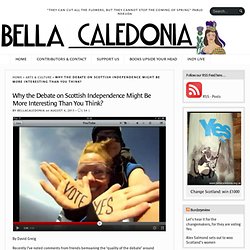 For some the journey towards voting is only just beginning and perhaps they are looking for information for the first time. Political nerds like me have been on this for a while but for most people this debate is a slow burn and will only really warm up next year. Let’s Kick Ass « By Mark Millar I was torn about independence for a long time, but what finally swayed me was the blank piece of paper it offers us as a nation. 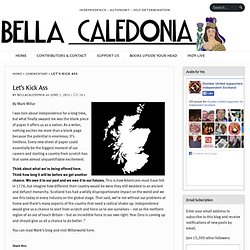 As a writer, nothing excites me more than a blank page because the potential is enormous. It’s limitless. Every new sheet of paper could essentially be the biggest moment of our careers and starting a country from scratch has that same almost unquantifiable excitement. Think about what we’re being offered here. You can read Mark’s blog and visit Millarworld here. A Dysfunctional Union « By Andrew Anderson Gordon Brown was the last Scottish Prime Minister of the UK. 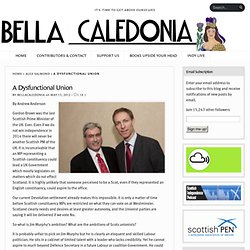 Ever. Even if we do not win independence in 2014 there will never be another Scottish PM of the UK. It is inconceivable that an MP representing a Scottish constituency could lead a UK Government which mostly legislates on matters which do not effect Scotland. It is highly unlikely that someone perceived to be a Scot, even if they represented an English constituency, could aspire to the office. Our current Devolution settlement already makes this impossible. Jim Sillars: Dancing Around Devolution. Scotch Myths. This myth is about telling Scots that as an independent nation, we would become non-entities on the global stage. 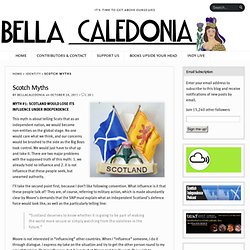 No one would care what we think, and our concerns would be brushed to the side as the Big Boys took control. We would just have to shut up and take it. There are two major problems with the supposed truth of this myth: 1. we already hold no influence and 2. it is not influence that these people seek, but unearned authority. Scotch Myths 2.

Scotch Myths No. 2 of an occasional series…by Doug Daniel. 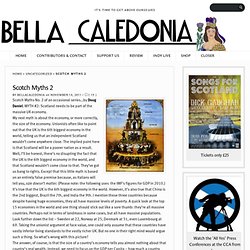 MYTH #2: Scotland needs to be part of the massive UK economy. Scotch Myths 3 – Devo Max. By Doug Daniel This wasn’t originally going to be the third in this series, but I felt the need to put it out there now, so here it is – Myth #3: The majority of Scots want Devolution Max. 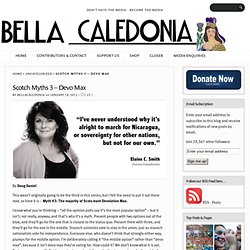 I know what you’re thinking – “all the opinion polls say it’s the most popular option” – but it isn’t; not really, anyway, and that’s why it’s a myth. Present people with two options out of the blue, and they’ll go for the one that is closest to the status quo. Present them with three, and they’ll go for the one in the middle. Staunch unionists vote to stay in the union, just as staunch nationalists vote for independence.

So is this me laying down my guns (well, laptop) already? Scotch Myths 4 – No Scottish Army. Scotch Myths 5: Countries Need to be Defined in Advance by Powerful men. By Robin McAlpine I might be alone in this but I am suddenly deeply drawn to the debate about the constitution of an independent Scotland. 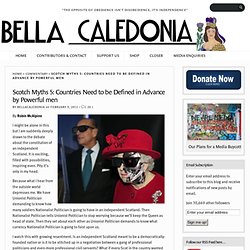 It is exciting, filled with possibilities, inspiring even. Pity it’s only in my head. Because what I hear from the outside world depresses me. We have Unionist Politician demanding to know how many soldiers Nationalist Politician is going to have in an independent Scotland. I watch this with growing resentment. Let me be absolutely clear – I have no issue with politicians stating their favoured solutions to the many constitutional conundrums ahead.

Positivity. By Mike Small Pundits seem to be coalescing around the idea that a ‘positive message’ is an essential part of political campaigning (nothing new here, see Pat’s Juggernaut of Joy thesis). Whether it’s Obama’s upbeat derivative (but ultimately empty) Yes We Can, or, as critics had it, Salmond’s indy question (characterised by some as some sort of Derren Brown-style mass hypnosis), the idea of positivity is the key, or so we’re told. It’s simple: people who whinge and moan all day become a bit of a drain to be around. We naturally gravitate towards those who bring a bit of sunshine and light into our life. This presents the Unionists with a challenge. In this context stressing continuity has a hollow ring. This vision-failure isn’t just a problem for the parties political future. Independence – autonomy – self-determination.

The SNP in Inverness – the Independence ball is now rolling. By Kevin Williamson Party conferences are usually of minor passing interest to anyone beyond the party faithful. The stage-managing is drearily transparent; the debates are anything but; the set piece speeches by the Great Leader & His Loyal Lieutenants are usually just a succession of sound bites tossed to the seagulls who follow such political trawlers; and everyone (who is on message) gets drunk, swaps email addresses and goes home happy… only to wake up and read the morning papers wondering why their elation, pride and backslapping hasn’t translated to newspaper headlines nor column inches. Should SNP delegates to Inverness feel any different? Possibly not. And yet, beyond the inevitable celebratory mood, and the legitimate gripes about fair coverage from the BBC, something significant happened in Inverness.