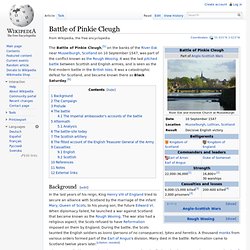 It was the last pitched battle between Scottish and English armies, and is seen as the first modern battle in the British Isles. It was a catastrophic defeat for Scotland, and became known there as Black Saturday.[6] Background[edit] In the last years of his reign, King Henry VIII of England tried to secure an alliance with Scotland by the marriage of the infant Mary, Queen of Scots, to his young son, the future Edward VI. When diplomacy failed, he launched a war against Scotland that became known as the Rough Wooing. When Henry died in 1547, Edward Seymour, maternal uncle of Edward VI, became Lord Protector and Duke of Somerset, with (initially) unchallenged power.

The Campaign[edit] Protector Somerset. Overview of Pinkie Battlefield. Battle of Pinkie Cleugh. Centuries of military struggle between Scotland and England have produced some epic contests, still seared into the folk memory of the two countries, from the humbling of English knighthood at the spear points of doughty Scots commoners at Bannockburn in 1314 to the death of Scotland's impetuous but chivalrous King James IV at Flodden in 1513. 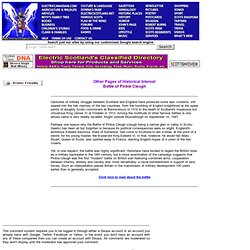 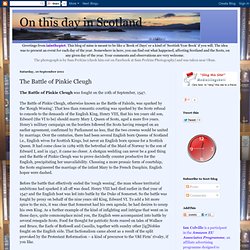 The Battle of Pinkie Cleugh, otherwise known as the Battle of Falside, was sparked by the ‘Rough Wooing’. That less than romantic courting was sparked by the Scots refusal to concede to the demands of the English King, Henry VIII, that his ten years old son, Edward (the VI to be) should marry Mary I, Queen of Scots, aged a mere five years. Henry’s military campaign on the borders followed the Scots having reneged on an earlier agreement, confirmed by Parliament no less, that the two crowns would be united by marriage. Over the centuries, there had been several English born Queens of Scotland i.e., English wives for Scottish Kings, but never an English born spouse for a Scottish Queen.

The Battle Of Pinkie 1547. Experienced French officers had been drilling the Scottish pikemen, and Patten noted the effectiveness of the Scots’ defense against the oncoming charge: ‘They thrust shoulders…nigh together, the fore rank, well nigh to kneeling, stood low before their fellows behind holding their pikes in both hands, and herewith on their left [arm] their bucklers; the one end of the pike against their right foot, the other against the enemy breast high; their fellows crossing their pike points with them forward; and thus, each with other, so nigh as place and space will suffer, through the whole ward so thick, that as easily shall a bare finger pierce through the skin of an angry hedgehog, as any encounter the front of their pikes.’ 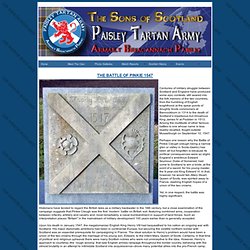 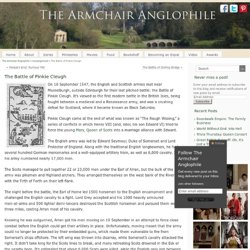 It’s viewed as the first modern battle in the British Isles, being fought between a medieval and a Renaissance army, and was a crushing defeat for Scotland, where it became known as Black Saturday. Pinkie Cleugh came at the end of what was known as “The Rough Wooing,” a series of conflicts in which Henry VIII (and, later, his son Edward VI) tried to force the young Mary, Queen of Scots into a marriage alliance with Edward. The English army was led by Edward Seymour, Duke of Somerset and Lord Protector of England. Along with the traditional English longbowmen, he had several hundred German mercenaries and a well-equipped artillery train, as well as 6,000 cavalry. In all, his army numbered nearly 17,000 men. The Scots had been beaten, but they were not defeated. Like this: Like Loading... Scotland History - On This Day. Home Page. ELL65_TheBattleofPinkieCleugh.pdf. Anglo-Scottish Wars: Battle of Pinkie Cleugh.

Centuries of military struggle between Scotland and England have produced some epic contests, still seared into the folk memory of the two countries, from the humbling of English knighthood at the spear points of doughty Scots commoners at Bannockburn in 1314 to the death of Scotland's impetuous but chivalrous King James IV at Flodden in 1513. 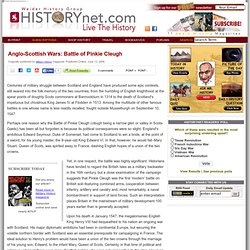 Among the multitude of other famous battles is one whose name is less readily recalled, fought outside Musselburgh on September 10, 1547. Perhaps one reason why the Battle of Pinkie Cleugh (cleugh being a narrow glen or valley in Scots-Gaelic) has been all but forgotten is because its political consequences were so slight. The 10th of September 1547 AD, Battle of Pinkie - last conflict between england and scotland.

Medieval - The Battle of Battle of Pinkie. Battle of Pinkie10th Septmber 1547 Attempts by the English to link the two kingdoms, of England and Scotland, through the marriage of the young queen Mary of Scotland and prince Edward (later Edward VI) of England, collapsed into open conflict in 1544-5. 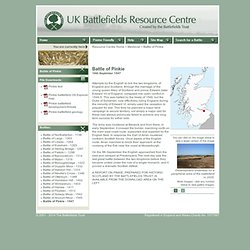 This was halted by the treaty of 1546, but the Duke of Somerset, now effectively ruling England during the minority of Edward VI, simply used the cessation to prepare for war. This time he planned a major land campaign to secure territory, not simply a major raid for these had always previously failed to achieve any long term success for either side. PCBGBattlefieldWalk.pdf. - battleofpinkie.pdf. SITE OF THE BATTLE OF PINKIE CLEUGH - ANGLO-SCOTTISH WARS in Wallyford, Scotland. Page: 1. Adjust the map using controls or drag with mouse Map Centre Position: Lat 55.93358 , Long -3.02382. Map Zoom Level: 13 - Icon Help Click & Zoom map to: You can help us promote this location. Historic Scotland Data Website - Battlefields: Battle of Pinkie. The Battle of Pinkie is significant as probably the single largest battle fought within Scotland and for the use on a British battlefield of some of the major military innovations of the 16th century. 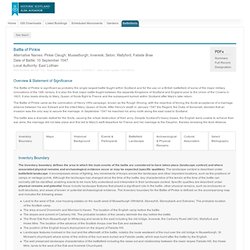 It is also the final major battle fought between the separate Kingdoms of Scotland and England prior to the Union of the Crowns in 1603. It also leads directly to Mary, Queen of Scots flight to France and the subsequent turmoil within Scotland after Mary's later return. View topic - Battle of Pinkie Cleugh 1547. Memorial: connected to Battle of Pinkie Cleugh (1547) Location: Lewisvale Park, Musselburgh OS Grid Ref.: NT349721 See on map: click hereUKNIWM No.: <not applicable> 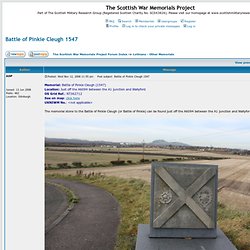 Day 252: The Rough Wooing, Or As I Like To Call It, Avenging The Penis! - 1000 Words, 1000 Days. If you were a male in mid-16th century England or Scotland, and you lacked any royal affiliations, chances are you would die because two people you’d never met had an argument with each other. 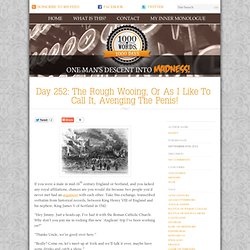 Take this exchange, transcribed verbatim from historical records, between King Henry VIII of England and his nephew, King James V of Scotland in 1542: “Hey Jimmy. Just a heads-up, I’ve had it with the Roman Catholic Church. Why don’t you join me in rocking this new ‘Anglican’ trip I’ve been working on?” “Thanks Uncle, we’re good over here.” “Really?

“No thanks. “Fuck you. And war it was. This is where things start to get weird. He knew it would be a challenge – that hat looks fancy, but it’s actually conforming to the exact shape of Edward’s head. Useful Scots word: pinkie. Edward Seymour, Duke of Somerset. Pinkie victor. But not for us By Betty Kirkpatrick What do you call the smallest slender finger on your hand? If you are a Scot who has been properly brought up you will instantly reply “pinkie”. People who hesitate before giving an answer may actually use the word pinkie, but may be reluctant to admit it. Not a bit of it. If Scots and Americans both use the word pinkie what do English speakers say? For some reason they both conjure up a ridiculous picture of an ultra-genteel lady daintily drinking tea out of a china cup with her little finger raised in the air.

There will be Scots around who use neither pinkie nor little finger, but who prefer wee finger. Battle of Pinkie Cleugh. Press release Scotland’s forgotten bloodiest battle is brought back to life A university has joined forces with local dramas groups to commemorate Scotland’s near forgotten ‘Battle of Pinkie Cleugh’. The battle between the Scots and English at Pinkie in Musselburgh, is thought to be one of the bloodiest ever to take place on Scottish soil.

However, although local historians know that 10,000 Scots died, most people are completely unaware of this tragic historical event which took place in 1547. Commemoration at Pinkie Cleugh Memorial Stone. The Battle of Pinkie Cleugh 1547: Telling Our Story: Pinkie Cleugh Battlefield Group celebrates £10000 Heritage Lottery Fund grant. Pinkie Cleugh Battlefield Group, based in Musselburgh, is one of the first groups in the UK to receive a Heritage Lottery Fund (HLF) All Our Stories grant, it was announced today. The Group has been given £10,000 in support of an exciting project that will culminate in the creation of a Battlefield Trail for the Battle of Pinkie Cleugh (1547), on the site of the biggest battle ever fought in Scotland, in the open country between Inveresk and Wallyford. All Our Stories, a brand new small grant programme, launched earlier this year in support of BBC Two’s The Great British Story – has been designed as an opportunity for everyone to get involved in their heritage.

With HLF funding and support, community groups will carry out activities that help people explore, share and celebrate their local heritage. The programme and HLF All Our Stories has proved a real hit and now the Pinkie Cleugh Battlefield Trail is one of hundreds of successful projects around the UK to receive a grant.

And: Baron Courts : News - 1547 - Battle of Pinkie Cleugh: Finding Out Much More ... East Lothian Archaeology Fortnight includes Pinkie Battlefield Tour Commencing @ 1.30pm, there's a minibus tour of Pinkie Cleugh Battlefield. It's on Sunday September 4th just 6 days before, September 10th 1547, the last pitched battle in the last war between the kingdoms of Scotland and England. It took place in open country to the south of Musselburgh. The English were striving to unite the crowns of the two countries by coercing marriage between their child sovereigns (Edward VI and Mary, Queen of Scots).