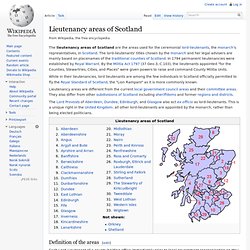 The lord-lieutenants' titles chosen by the monarch and her legal advisers are mainly based on placenames of the traditional counties of Scotland. In 1794 permanent lieutenancies were established by Royal Warrant. By the Militia Act 1797 (37 Geo.3, C.103), the lieutenants appointed "for the Counties, Stewartries, Cities, and Places" were given powers to raise and command County Militia Units. While in their lieutenancies, lord lieutenants are among the few individuals in Scotland officially permitted to fly the Royal Standard of Scotland, the "Lion Rampant" as it is more commonly known. Lieutenancy areas are different from the current local government council areas and their committee areas. The Lord Provosts of Aberdeen, Dundee, Edinburgh, and Glasgow also act ex officio as lord-lieutenants. 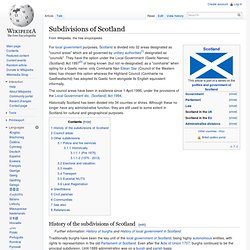 They have the option under the Local Government (Gaelic Names) (Scotland) Act 1997[2] of being known (but not re-designated) as a "comhairle" when opting for a Gaelic name; only Comhairle Nan Eilean Siar (Council of the Western Isles) has chosen this option whereas the Highland Council (Comhairle na Gaidhealtachd) has adopted its Gaelic form alongside its English equivalent informally.

Historically Scotland has been divided into 34 counties or shires. Although these no longer have any administrative function, they are still used to some extent in Scotland for cultural and geographical purposes. Scottish Neighbourhood Statistics, Information about Scotland's Areas. What is the surface area of Scotland. What is the surface area of Scotland? What_is_the_surface_area_of_scotland the area 78,772 square kilometers What is the two-dimensional area of the object Scotland, the constituent country of the United Kingdom? 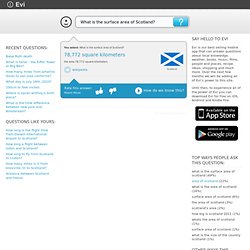 I followed this chain of reasoning: By calculation (generator: ["now@trueknowledge.com"]) I know that: The current time is April 27th 2014, 21:45:31 I know from locally stored knowledge that: Fact 1: 78,772 square kilometers is the area of Scotland ([fact: ["681659112@trueknowledge.com"]]) Fact 1 is true for February 5th 2010 onwards ([fact: ["681659132@trueknowledge.com"]]) By calculation (generator: ["timeperiodtopoint@trueknowledge.com"]) I know that: Fact 1 is true at April 27th 2014, 21:45:31 I used the following facts to provide this answer: 78,772 square kilometers has been the area of Scotland since at least February 5th 2010 Evi is our best selling mobile app that can answer questions about local knowledge, weather, books, music, films, people and places, recipe ideas, shopping and much more. Facts and Figures of Scotland. Scotland Facts and Figures Scotland is the second largest country in Great Britain. 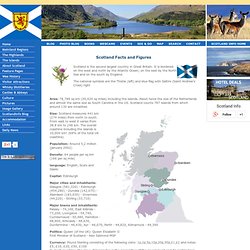