Arbroath smokie. Racks of haddock in a homemade smoker. 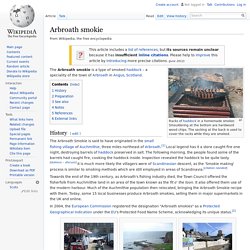 Arbroath Smokies. Arbroath Smokies originated in Auchmithie, a small fishing village a few miles north of Arbroath, once populated with fisher folk of Scandinavian origin; ‘Spink’ is a Norse surname. 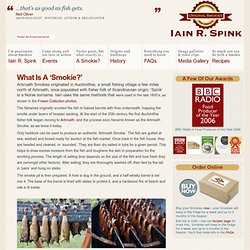 Iain uses the same methods that were used in the late 1800’s, as shown in the Fraser Collection photos. The fishwives originally smoked the fish in halved barrels with fires underneath, trapping the smoke under layers of hessian sacking. At the start of the 20th century the first Auchmithie fisher-folk began moving to Arbroath, and the process soon became known as the Arbroath Smokie, as we know it today.

Only haddock can be used to produce an authentic ‘Arbroath Smokie.’ The fish are gutted at sea, washed and boxed ready for auction at the fish market. Scottish food - Arbroath Smokies. What is an Arbroath Smokie The Arbroath Smokie is haddock, smoked over hardwood, in and around the small fishing town of Arbroath, Angus (Forfarshire) in east Scotland. 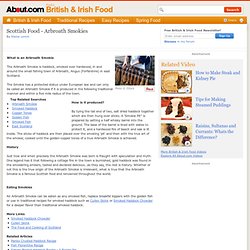 The Smokie has a protected status under European law and can only be called an Arbroath Smokie if it is produced in the following traditional manner and within a five mile radius of the town. How is it produced? By tying the tail end of two, salt dried haddock together which are then hung over sticks. A ‘Smokie Pit” is prepared by setting a half whisky barrel into the ground. History.

VisitScotland Food and Drink. Arbroath Smokies The county of Angus is home to one of Scotland's most distintive fish dishes, the Arbroath Smokie and no visit to the area is complete without sampling this world-famous delicacy. 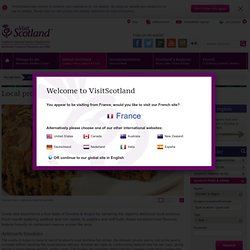 Smokies are made by smoke-curing haddock over hot oak chips, giving the fish a strong flavour and rich, golden colour. The Smokie has protected status from the European Union which means only haddock smoked using traditional methods within a five-mile radius of Arbroath can officially use the name ‘Arbroath Smokie’. Pay a visit to the fishing town of Arbroath and you won’t have to look far to find fish shops selling Smokies. The story behind Arbroath smokies. Its name now protected by law, the Arbroath smokie is one of Angus's enduring food emblems The origin of Angus's most famous delicacy is thought to stretch as far back as the eleventh century. 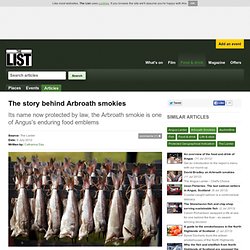 Arbroath smokers stick proudly to traditional methods, making an Arbroath smokie is as historic as a meal gets, as Catharina Day finds out Nowadays in the Fit o’ the Toon, the area of land given to attract fishermen to Arbroath in the 1800s, there are still many artisanal fishmongers making smokies in their backyards to their own subtly different family methods. The haddock that is preserved in this way is the most delicious and famous delicacy to come from this area. Surnames among the fisherfolk such as Spink, Cargill, Swankie and Smith, recur here again and again. These settlers may have brought with them their traditional hot-smoked method of preserving haddock. Arbroath was keen to stimulate its fishing industry pursuing herring, white fish and shellfish. Bellrock.org.uk : Arbroath : The Smokie.

Arbroath is also home to one of the world’s famous gastronomic delights - “The Smokie”. For the uninitiated, however, it is little more than a humble smoked haddock! The old method of preparing The Smokie. Note the woman with her “cuttie” or clay pipe The fish are first gutted, deheaded and cleaned; then salted and dried overnight. Tied in pairs at the tail, the fish are suspended on a pole, and smoked over a covered fire (preferably using oak or beech chippings) for anything between 45-90 minutes. Traditionally a barrel, sunk into the ground or pit, was used to smoke the fish. Even though Smokies are delicious to eat when cold, one of the best ways of preparing this mouth-watering delicacy is to place it in a pan of boiling water, then, once piping hot, quickly remove the skin, and the flesh from the bones if required, season to taste, and serve on hot buttered toast or brown bread! Arbroath Smokies by Iain R. Spink.

Arbroath Smokies TV Report from 1980s - TheShoppie.com. This site uses some unobtrusive cookies to store information on your computer. 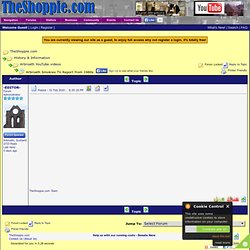 These cookies are set when you submit a form, login or interact with the site by doing something that goes beyond clicking on simple links. We also use some non-essential cookies to anonymously track visitors or enhance your experience of the site. To control third party cookies, you can also adjust your browser settings. (One cookie will be set to store your preference) Arbroath smokies. There's only one Arbroath smokie. Food and Farming - Food - Food industry. Regulation (EEC) No 2081/92 - Application for Registration Article 6/2 Protected Geographical Indication National application No: 05117 - Arbroath Smokie 1. 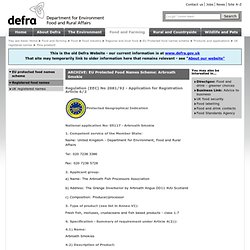 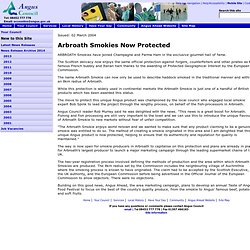 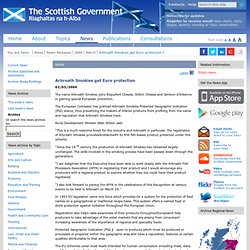 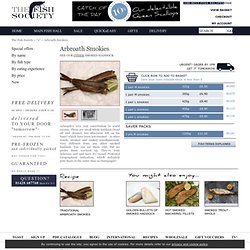 These are small whole haddock (head off and cleaned, but otherwise left on the bone) which have been hot-smoked - in other words, smoked and cooked simultaneously. Very different from any other smoked haddock. You can eat them cold, but we prefer them warmed up. They're truly delicious and and have EU-issued Protected Geographical Indication, which definitely puts them in the same class as champagne! Fresh Fish online from Alex Spink and Sons. Arbroath smokies. Smoked Fish, Arbroath Smokies, Smoked Scottish Fish. Arbroath Smokies.

Arbroath Smokies. If you can't get them hot off the barrel, the next best way to eat them is to open them up, remove the bone, dot with a little butter and reheat gently for approximately 3 minutes under a medium grill, or they can be microwaved with care. (2 minutes in a 650 watt microwave oven). Another favourite is to serve them with grilled bacon. However, for the more adventurous, here are some more ideas for you. Arbroath Smokie Cullen Spink Recipe This variation by myself of a famous traditional Scottish soup, but using Arbroath Smokies, is cheap, easy to make, filling and healthy. I recommend it as almost a meal in itself. R.R. A Few Of Our Awards BBC Radio 4 Food Producer of the Year 2006 Country Living/Sainsbury’s ‘Taste Of Britain’ Gold Award 2007 Country Living/Waitrose ‘Made In Britain’ Award 2007 Great Taste 3 Star Gold Award 2012 UKTV ‘Local Food Hero’ Scottish Regional Winner & 3rd in UK 2006 Order Online Buy Smokies Now Eat hot or cold – see our recipes page for more info.

Food - Arbroath smokie recipes. Recipe: Arbroath Smokies. Arbroath Smokies are a delicacy found on many top restaurant’s menus and Monteiths, with its focus on contemporary Scottish cuisine, is no exception. We use them in our tasty risotto which receives rave reviews from diners and staff alike. A guest visiting from the USA recently posed our chef a question though – what exactly is an Arbroath smokie and what’s the best recipe to use them in at home.

Our kitchen team have created this simple fishcake dish to highlight the flavour of the smokies – but before we show you how to cook them let’s explain exactly what a ‘smokie’ is. Simply put, ‘Smokies’ are whole wood-smoked haddock with the backbone still in. They originate from Auchmithie, a small fishing town North of Arbroath which has strong links to Scandinavia. To produce the perfect Smokie the fish are dry salted to draw out excess moisture before being rinsed off and placed on sticks above a half whisky barrel filled with burning wood.