Timber Fin House / Neil Dusheiko Architects. Architect: Neil Dusheiko Architects Location: Walthamstow, London, England Project Year: 2010 Contractor: RK Construction Engineer: Momentum Photography: Neil Dusheiko Architects The project began one afternoon while the architect Neil Dusheiko was sitting with the client on their existing terrace discussing ideas about how to create more space for the family in the tiny terrace house. It was thought it would be interesting if the existing central staircase in the double fronted house, somehow continued up and over into the garden from the mid landing, and so the idea of extending the house came about. The clients wanted a house built entirely out of timber. The concept was to create a series of different volumes to accommodate the various functions in an informal stack of boxes placed next to each other like packing creates. Alison Brooks Architects. Newhall Be, Harlow Exeter College Oxford, Walton Street Lens House, London. 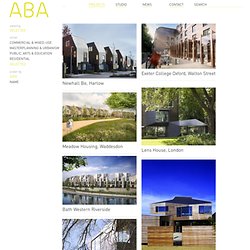 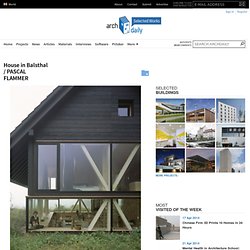 This timber house is about different ways of perceiving the landscape surrounding it. There are two principal floors; one set 750mm below the earth, one 1500mm above. The ground floor consists of one single family room with a noticeably low horizontal ceiling. In this space there is a physical connection with the nature outside the continuous windows. Large windows open to composed views of the wheat field. Old Bearhurst. Project Title: Old BearhurstLocation: Upper Rother Valley, East Sussex Wood Species & Products Used: Plato®wood Fraké. 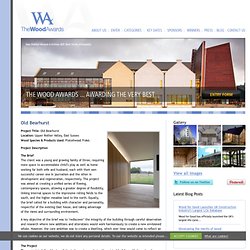 Project Description The BriefThe client was a young and growing family of three, requiring more space to accommodate child’s play as well as home working for both wife and husband, each with their own successful career one in journalism and the other in development and regeneration, respectively. The project was aimed at creating a unified series of flowing, contemporary spaces, allowing a greater degree of flexibility, linking internal spaces to the impressive rolling fields to the south, and the higher meadow land to the north. Equally, the brief called for a building with character and personality, respectful of the existing Oast house, and taking advantage of the views and surrounding environment. 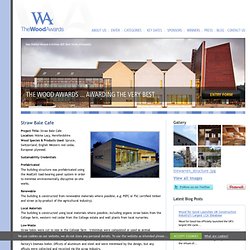 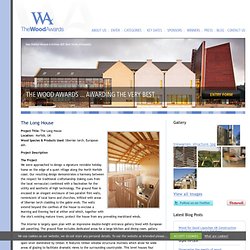 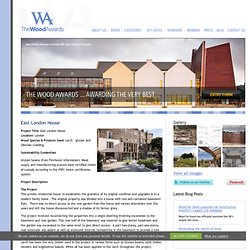 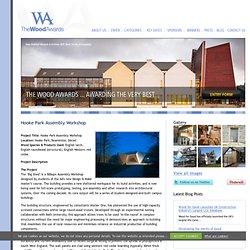 Project Description The ProjectThe ‘Big Shed’ is a 500sqm Assembly Workshop designed by students of the AA’s new Design & Make master’s course. The building provides a new sheltered workspace for its build activities, and is now being used for full-scale prototyping, testing, pre-assembly and other research into architectural systems. Over the coming decade, its core output will be a series of student-designed-and-built campus buildings. University of Exeter Forum. Project Title: University of Exeter ForumLocation: Exeter, Devon, UKWood Species & products Used: English and Welsh oak, German spruce glulam. 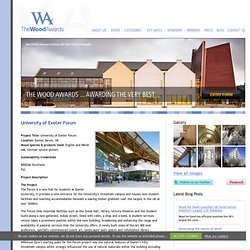 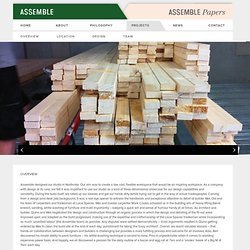 Our aim was to create a low cost, flexible workspace that would be an inspiring workplace. As a company with design at its core, we felt it was important to use our studio as a kind of three-dimensional showcase for our design capabilities and sensibility. During the build itself, we rolled up our sleeves and got our hands dirty (while trying not to get in the way of actual tradespeople). Music rehearsal hall, Thannhausen. Sound space. 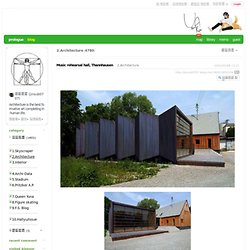 For a lot of metal plating.Caught between two folded wooden panels. Encapsulated in copper. Opening up to the east and west with a glass skin. Naturum Kosterhavet, Ekenäs, 2012. Open-Concept Japanese Family Home With Domed Interior. Humble Homes Japanese-Style Home Built by Brian Schulz for $11,000. This beautifully crafted small house has been built by Kayak instructor Brian Schulz. Brian based the design and overall aesthetic of his house on Japanese architecture. Typically the fine woodwork of traditional Japanese buildings costs a pretty penny. This is due to the level of craftsmanship involved, but Brian has been able to replicate different elements of Japanese architecture, and on a budget too. The entire cabin is made from locally sourced salvaged wood, which helped to reduce the overall cost – approximately $11,000. Schulz also carried out all of the building work, allowing him to save on costs associated with labour. Taking after traditional Japanese architecture, Schulz has gone for a simple interior, leaving the structural joints on show, incorporating low-level wooden furniture and paper lanterns.

Fujitsubo Beauty Parlor by Archivision Hirotani Studio. Green Prefab Shed Homes: Small Space Living by Design. Sheds do not sound like something you would want to live in, but as modern modular, mobile and miniature houses become increasingly popular sustainable living space options, well, even products dubbed with titles like the Big Shed and Little Shed is not such a bad idea. There is an art to designing smalls-space structures so they are convenient and compact but also comfortable and livable – and a certain lifestyle of simplicity sought by many that makes them a good match for some people.Plus, these designs by Dwelle are relatively affordable as home prices go: you can buy ones of these all-in-one buildings (and not worry about the hassles of construction) for between fifty and eighty thousand dollars.

This homeowner took backyard storage and modern style into his own hands, building a shed with reclaimed redwood and ingenuity. Tetra Shed - Modular Garden Office. Small Houses: Tiny Compact Home Design. I’m a big fan of living lightly on our stunning planet and love my modern comforts as well. In Light House, by Camera Buildings, your home can be comfy in its tiny foot print. At an overall size of under 100 sq.ft., this small home is 8’-4” x 12’-0”. It’s built for you in a factory in British Columbia so on-site building headaches do not exist, except for the foundation that you’ll need. Continue reading. RIBA Norman Foster Travelling Scholarship. Winner of the 2013 Norman Foster Travelling Scholarship announced.