Holding Your Hand In This Position Does Something Incredible For Your Body - Here’s How. Yoga and acupuncture are very popular in the western world as a way to treat certain aches and pains. 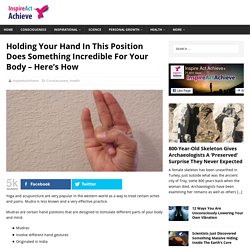 Mudra is less known and a very effective practice. Mudras are certain hand positions that are designed to stimulate different parts of your body and mind. Mudras:Involve different hand gesturesOriginated in India Originating in India, these hand gestures are designed to stimulate all parts of the body – and mind. Moby Has Just Released Four Hours Worth Of Free Music Designed For Yoga And Meditation. Moby (Richard Melville Hall), is an American DJ, singer, songwriter, musician, photographer and animal rights activist. 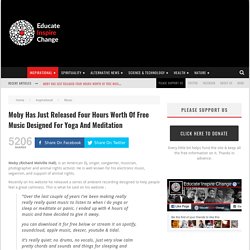 He is well known for his electronic music, veganism, and support of animal rights. Recently on his website he released a series of ambient recording designed to help people feel a great calmness. This is what he said on his website ; I am a big Moby fan myself and am I hope you enjoy his epic sounds as much as I am. Namaste. Download here Comments comments. Light Body Activation!~CAUTION~ Only listen when you are ready! Binaural Beats+Subliminal Meditation. **WARNING** SECRET MONK SOUNDS FOR BRAIN ACTIVATION & HEALING : VERY POWERFUL. Music for Healing female energy. How to Access Reality Beyond Thought. The Mystic Didgeridoo [Didgeridoo Psybient Compilation Vol. 1]

Reiki - Heart Energy Healing Sound - Energia Corazon Sanacion ( 528 hz Solfeggio Frequencies ) The Geometry of Energy in the Human Body. Marconi Union - Weightless. Marconi Union - Weightless. The Secret Universal Mind Meditation by Kelly Howell. The Wisdom of a Silent Mind. When your sense perception contacts sense objects and you experience physical pleasure, enjoy that feeling as much as you can. 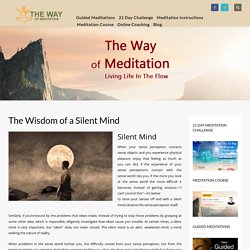 But if the experience of your sense perception’s contact with the sense world ties you, if the more you look at the sense world the more difficult it becomes, instead of getting anxious—“I can’t control this”—it’s better to close your senses off and with a silent mind observe the sense perception itself. Similarly, if you’re bound by the problems that ideas create, instead of trying to stop those problems by grasping at some other idea, which is impossible, diligently investigate how ideas cause you trouble. At certain times, a silent mind is very important, but “silent” does not mean closed. The silent mind is an alert, awakened mind; a mind seeking the nature of reality. When problems in the sense world bother you, the difficulty comes from your sense perception, not from the external objects you perceive.

Namaste: Devi Prayer, Buddhist music, gentle, calming, peaceful music, relaxing music. Balance & Harmony 432 Hz. 1 Hour of Epic Space Music: COSMOS - Volume 2. A Meditation for the Mind (Lecture by Lao Tze) This is What Happens When You Take a Vow of Silence For A Week. A vow of silence (mauna) has one main focus — to awaken awareness. 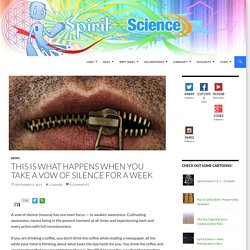 Cultivating awareness, means being in the present moment at all times and experiencing each and every action with full consciousness. If you are drinking a coffee, you don’t drink the coffee while reading a newspaper, all the while your mind is thinking about what tasks the day holds for you. You drink the coffee and are conscious that you are picking up the cup. You lift it to your lips, you feel the sensation of taste, you put the cup back down and your mind is fully in the present moment and the task at hand.

By living in the present, you increase your awareness. A vow of silence further enhances this awareness and gives you the shake you need, to finally break the mold. Bruce Lee's Personal Writings on Willpower, Emotion, Behaviour, Memory, Imagination, and Confidence. Bruce Lee (November 27, 1940–July 20, 1973) is best known for his performances in martial arts and films. 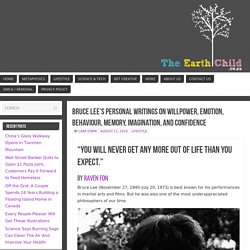 But he was also one of the most underappreciated philosophers of our time. Being an Asian actor in the 60’s and 70’s meant Lee experienced difficult issues because of his race. Even after eventually breaking through the Hollywood troubles and being cast in a lead role, the studios still treated him like a brainless robot who was only there to entertain the masses with his impressive kung-fu skills. They even tried to cut out the philosophic parts from Enter the Dragon because they wanted an entertaining action flick.

Lee refused to continue filming for 2 weeks, insisting that kung-fu and philosophy are inextricably entwined- each being the catalyst for the other. Decoding signs of death by Lord Shiva. Talking about death, even just thinking about it, creates fear in the minds of many. 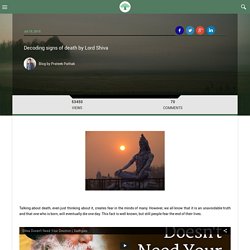 However, we all know that it is an unavoidable truth and that one who is born, will eventually die one day. This fact is well known, but still people fear the end of their lives. The Difference Between Intuition & Fear: How To Tell Them Apart. Harnessing Your Inner Energies: How To Feel Your Chi. Chi is an ancient Chinese term, which can be translated as energy. 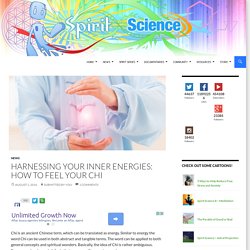 Similar to energy the word Chi can be used in both abstract and tangible terms. The word can be applied to both general concepts and spiritual wonders. Basically, the idea of Chi is rather ambiguous. Everyone who channels it finds their own specific meanings and uses. Chi: The Wisdom of a Silent Mind. My Teaching Pedagogy. The Four Primary Skills Of All Meditation. Read about the four primary skills that enable all forms of meditation. by Paul Cavel Emancipation or freedom from slavery and bondage is ultimately what the human spirit craves. 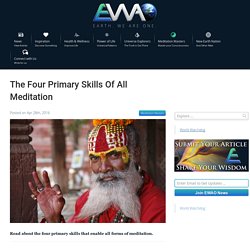 From the perspective of your spirit, slavery encompasses how the attachments in your life—such as sex, material items, money, power and all that they bring—prevent you from being free.