Shinto Documents. #atozchallenge – H is for Harionago, with wicked, barbed hair « Write, or Else! The beautiful terror of Ehime. 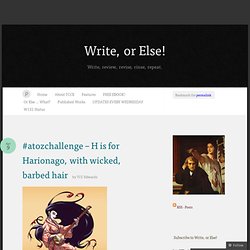 A hari-onago is a Japanese ghoul, an apparition of beauty on the island of Shikoku. She stalks about at night, seeking young men to feed upon. When she finds a suitable victim, she laughs, her power enticing him to join in. If he succumbs and laughs with her, she lashes out with her long, barbed hair. Her victims quickly find themselves brutally mutilated in the tangles of her black locks. Few stories tell of men escaping her laughter, but quick and nimble feet and a nearby door to shut on her might just save you from doom. Sources: Also check out this cool flash fiction from a previous A-to-Z: H is for Harionago, by Kaye Draper Like this: Like Loading... 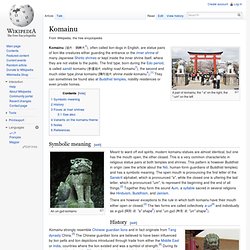 , often called lion-dogs in English, are statue pairs of lion-like creatures either guarding the entrance or the inner shrine of many Japanese Shinto shrines or kept inside the inner shrine itself, where they are not visible to the public. The first type, born during the Edo period, is called sandō komainu (参道狛犬, visiting road Komainu?) , the second and much older type jinnai komainu (陣内狛犬, shrine inside komainu?). [1] They can sometimes be found also at Buddhist temples, nobility residences or even private homes. Symbolic meaning[edit] An un-gyōkomainu Meant to ward off evil spirits, modern komainu statues are almost identical, but one has the mouth open, the other closed.

There are however exceptions to the rule in which both komainu have their mouth either open or closed.[3] The two forms are called collectively a-un[4] and individually as a-gyō (阿形, lit. History[edit] The shīsā (シーサー?) See also[edit] Japanese Folktales. Selected and edited by D. 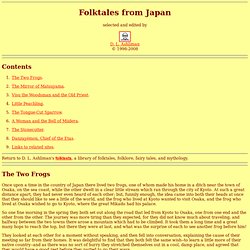 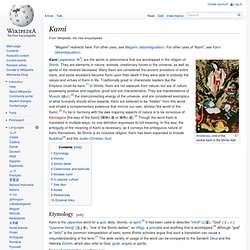 Are the spirits or phenomena that are worshipped in the religion of Shinto. They are elements in nature, animals, creationary forces in the universe, as well as spirits of the revered deceased. Many Kami are considered the ancient ancestors of entire clans, and some ancestors became Kami upon their death if they were able to embody the values and virtues of Kami in life. Traditionally great or charismatic leaders like the Emperor could be kami.[1] In Shinto, Kami are not separate from nature, but are of nature, possessing positive and negative, good and evil characteristics. Etymology[edit] Some etymological suggestions are: Gender is also not implied in the word Kami, and as such it can be used to reference either male or female. 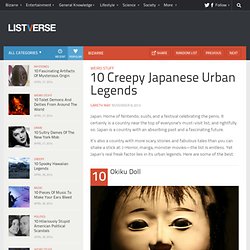 Home of Nintendo, sushi, and a festival celebrating the penis. It certainly is a country near the top of everyone’s must-visit list, and rightfully so. Japan is a country with an absorbing past and a fascinating future. It’s also a country with more scary stories and fabulous tales than you can shake a stick at: J-Horror, manga, monster movies—the list is endless. 10Okiku Doll There is no doubting that dolls are creepy. The Okiku doll can be found at the Mannenji temple in Iwamizawa, in Hokkaido prefecture.

The legend goes that a teenage boy bought the doll for his two-year-old sister, Okiku. 9The Red Room Curse Pop-ups are annoying at the best of times. The “Red Room Curse” is simple. As with so many urban legends, there’s an element of truth to the tale. 8The Curse Of The Kleenex Commercial “Pass me a tissue. All was not fine, however. As a result, many viewers found the advert disturbing and several complaints were made. 7Jinmenken (Human-Faced Dogs) Japanese Creation Myth. The following is a modern retelling of the creation story from the Kojiki, Japan's oldest chronicle, compiled in 712 CE by O No Yasumaro. 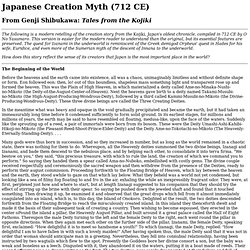 This version is easier for the modern reader to understand than the original, but its essential features are preserved. Myths and Legends - frames. Japanese myth.