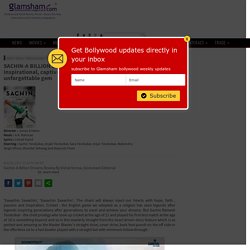 The chant will always inject our hearts with hope, faith , passion and inspiration. Cricket - the English game we adopted as a religion has seen legends after legends inspiring generations after generations to excel and achieve your dreams. But Sachin Ramesh Tendulkar - the child prodigy who took up cricket at the age of 11 and played his first test match at the age of 16 is something beyond and so is this masterly straight from the heart driven docu feature which is as perfect and amazing as the Master Blaster's straight drive, cover drive, back foot punch on the off side or the effortless six to a fast bowler played with a straight bat with minimum follow through.

With Sachin himself coming and telling his story on screen with experts like Majumdar, Bhogle and other legends like Dhoni, Virat, and Mr. A.R. Can you spot Shah Rukh Khan in Salman's TUBELIGHT trailer? May 26, 2017 11:50:23 AM ISTBy Ruchita Mishra, Glamsham Editorial The much-awaited trailer of TUBELIGHT is here and all the bhai fans are smitten by it Set in 1962, where the film deals with a sensitive subject of Indo-china war. 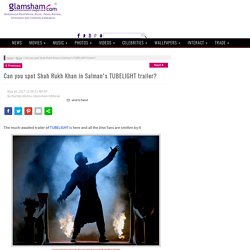 The trailer shows Laxam (Salman Khan) and Bharat's (Sohail Khan) bonding of brothers. If this wasn't just enough, we saw a glimpse of Shah Rukh Khan, who is reportedly doing a cameo in the film. Wondering where we spotted King Khan? Directed by Kabir Khan, the film is set to release this Eid. This B-town actress went unnoticed at Cannes red carpet!

Deepika Padukone's Cannes film festival look is breaking the internet! Why MERI PYAARI BINDU is a huge setback for Parineeti Chopra! May 17, 2017 2:49:40 PM ISTBy Abid, Glamsham Editorial While the failure of every film post BAAHUBALI 2 is being blamed on the unstoppable run of the S. 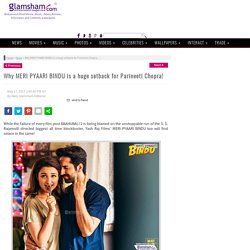 S. Rajamolli directed biggest all time blockbuster, Yash Raj Films' MERI PYAARI BINDU too will find solace in the same! However, more than the premiere YRF banner, which will bounce back strongly, as always, the non-performance of MERI PYAARI BINDU will put a huge question mark on the career of the once poised to be numero uno actress, Parineeti Chopra, who had successful projects like LADIES VS RICKY BAHL, ISHAQZAADE and SHUDDH DESI ROMANCE to her credit.

If the arrival of super talented Alia Bhatt and the versatile Shraddha Kapoor was not enough, most of Parineeti's recent films like DAAWAT-E-ISHQ, KILL DIL bombed miserably but she was expected to make resounding comeback with MERI PYAARI BINDU. Katrina and Salman's this picture is too hot to handle! May 17, 2017 10:01:46 AM ISTBy Ruchita Mishra, Glamsham Editorial Ever since Salman and Katrina have joined hands for Ali Abbas Zafar's film TIGER ZINDA HAI, the duo has been teasing fans with their pictures together and their funny conversations on social media. 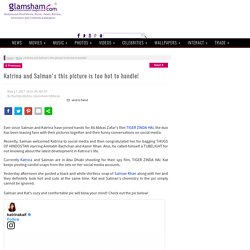 Recently, Salman welcomed Katrina to social media and then congratulated her for bagging THUGS OF HINDOSTAN starring Amitabh Bachchan and Aamir Khan. Also, he called himself a TUBELIGHT for not knowing about the latest development in Katrina's life. What next for Priyanka Chopra after BAYWATCH? May 16, 2017 11:56:54 AM ISTBy Ruchita Mishra, Glamsham Editorial Priyanka Chopra has made her mark in Hollywood with her famous television series ‘Quantico'. 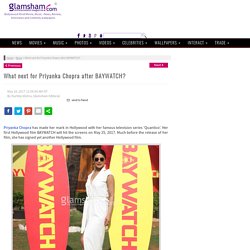 Her first Hollywood film BAYWATCH will hit the screens on May 25, 2017. Much before the release of her film, she has signed yet another Hollywood film. As per our close sources, the makers of A KID LIKE JAKE directed by Silas Howard are in negotiations with Priyanka Chopra. While Claire Danes of ROMEO JULIET and THE HOURS fame has been signed for the film, producer Paul Bernon and director Silas Howard are in talks with Academy Award winner Octavia Spencer and international superstar Priyanka Chopra. While details are under wraps for the moment, sources confirm that Priyanka has been approached for the film and the negotiations are on. 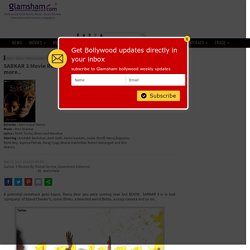 Disha Patani flaunts curves in a bikini. In Pics: Justin Bieber gears for concert; Salman's bodyguard by his side. May 10, 2017 12:44:23 PM ISTBy Glamsham Editorial The much awaited day has arrived – JUSTIN BIEBER CONCERT! 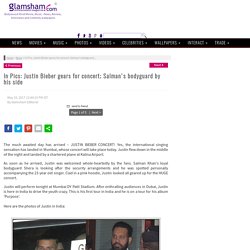 Yes, the international singing sensation has landed in Mumbai, whose concert will take place today. Justin flew down in the middle of the night and landed by a chartered plane at Kalina Airport. As soon as he arrived, Justin was welcomed whole-heartedly by the fans. SS Rajamouli looking forward to work with this megastar. Justin Bieber to have 'Koffee' with Karan? May 8, 2017 10:49:31 AM ISTBy Glamsham Editorial International icon Justin Bieber is all set to visit India for his World Purpose Tour. 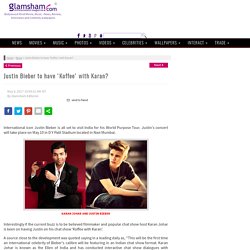 BAAHUBALI 2 beats DANGAL to become India's biggest global grosser! What more is there to glorify and to say about the phenomenal and unimaginable run of S .S Rajamouli's magnum opus, BAAHUBALI : THE CONCLUSION, the follow up to another lavishly mounted extravaganza, BAAHUBALI : THE BEGINNING. 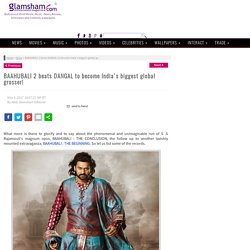 So let us list some of the records. With BAAHUBALI 2 (Hindi) netting 245 crore (to be validated) during the opening week, it surpassed the record of SULTAN (210 crore) during the same period. If we talk about the global picture, BAAHUBALI 2 : THE CONCLUSION (all versions), has grossed nearly 860 crore globally, thus beating the highest worldwide (gross) record of PK, which stands at around 750 crore. Vinod Khanna prayer meet: SRK, Big B, Aamir, Madhuri, Sridevi, Hrithik & others turn up. TUBELIGHT teaser: Did Salman Khan remind us of Hrithik Roshan? May 3, 2017 6:26:42 PM ISTBy Pooja Sharma, Glamsham Editorial As we told you yesterday, the makers of TUBELIGHT are leaving no stone unturned to keep the audience engaged until the film hits the silver screens. 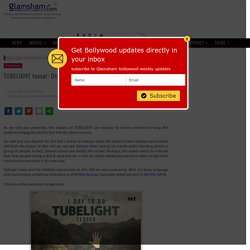 So with just one day left for the film's teaser to release today the makers have released yet another still from the teaser. In this still we can see Salman Khan raising his hands while standing amidst a group of people. In fact, Salman shines out amidst the crowd. Perhaps, the maker wants to indicate that how despite being a dull & slow-learner in the so-called intellectual world is rather bright than many brainy personas in his own way.

BAAHUBALI 2 (Hindi) defeats SULTAN and wins the DANGAL! May 2, 2017 10:00:18 AM ISTBy Abid, Glamsham Editorial Maverick director S.S. Rajamouli's BAAHUBALI-THE CONCLUSION (Hindi dubbed), follow up to the blockbuster, BAAHUBALI-THE BEGINING, has conquered the Bollywood terrain too! BAAHUBALI 2 - THE CONCLUSION, SULTAN and DANGAL As per the details, after a 40 crore plus opening day, BAAHUBALI 2 (Hindi ), went from strength-to-strength, ending the opening weekend netting in excess of 125 crore. What it means is that the film has beaten the all time weekend records of films like Salman Khan's SULTAN and the Aamir Khan venture DANGAL, by well over 20 crore, which may sound unbelievable but is actually true. Even in the overseas, BAAHUBALI-THE CONCLUSION has grossed nearly $20m, with over $10m just from US, during the opening weekend itself.

Revealed Salman Khan's special friend in TUBELIGHT. May 2, 2017 10:02:36 AM ISTBy Pooja Sharma, Glamsham Editorial New teaser of Kabir Khan's TUBELIGHT starring Salman Khan will be out in two days and we know how difficult it is to wait patiently for its release. So in order to make this wait bit bearable the makers of the film have released a new poster of their film. 10 remarkable performances of late actor Vinod Khanna. April 27, 2017 6:40:27 PM ISTBy Rachana Sheth, Glamsham Editorial Veteran actor Vinod Khanna bid an adieu to the world this morning, leaving everyone in shock. Apart from being the best looking man of his times, Vinod was also a terrific actor.

But Vinod didn't have a conventional launch like other actors. He stepped in the industry by playing a baddie or second lead roles like in Sunil Dutt's MAN KA MEET followed by MERE APNE, MERA GAON MERA DESH, ACHANAK, PURAB AUR PASCHIM, SACHAA JHUTHA and others. However, his first film as lead actor was HUM TUM AUR WOH in 1971. Understanding the genius of BAAHUBALI director S.S. Rajamouli. Padma Shri Koduri Srisaila Sri Rajamouli popularly known as S.S. Rajamouli prefers to be called ‘Raja' (Hindi word for King) but in actual the maverick modern day genius is delightfully down-to-earth and humble to the core.

The man behind the phenomenon called BAAHUBALI has reincarnated the faith, excitement and hysteria amongst Indian audience for blockbusters and the reason why we visit the theatre and enjoy the big screen experience of a larger than life extravaganza. His 11th movie BAAHUBALI :2 THE CONCLUSION is beyond doubt the most eagerly awaited sequel/movie on earth (for the Indian audience worldwide) that is making them go crazy to know why did Kattappa killed BAAHUBALI. What makes Raja such a maverick? Let's understand the genius of the Indian writer director S.S. Son of noted Telugu writer K. Meet the genius who inspired Aamir Khan. April 25, 2017 3:05:21 PM ISTBy Vishal Verma, Glamsham Editorial Meet the inspiration behind the perfectionist Aamir Khan. His name is Majid Majidi – the renowned genius Iranian filmmaker known for his simple and touching cinema like CHILDREN OF HEAVEN, COLOURS OF PARADISE etc, that won hearts and crossed boundaries.

This director is all praise for Salman Khan! Maatr Movie Review and Rating. Kill. Kill.. this is so run of the mill. Noor Movie Review and Rating. She hates interviewing Sunny Leone and cringes over the faulty geyser, desires to do a substantial story, the 28 year old Noor (Sonakshi Sinha) is the desi Bridget Jones - sloppy, self- obsessed but endearingly funny as our fellow journalist next desk. NOOR produced by T-Series and Abundantia Entertainment is a charming feel good cinema that is able to put a SPOTLIGHT on the city of dreams Mumbai and mirror the complicated but liberal, indefinable and progressive life of an upper middle-class metropolitan urban.

Kangana Ranaut speaks up about molestation charges against her QUEEN director. Bipasha Basu follows Akshay Kumar's footsteps! Akshay Kumar: This is how the national award winner can become immortal before dying. Bollywood fittest actor and the new age on screen icon of patriotism and good virtues Akshay Kumar received the national award honour as the best actor for RUSTOM. Popularly known as the Khiladi, Akshay's win has triggered a storm for different reasons and here in this open letter to the superstar, a pakka (true) diehard fan of Akshay, has expressed his true feelings and suggested how his favourite Akki Bhaiya can become immortal before dying and seal the lips of his critics. Read on. Salman Khan meets ailing Vinod Khanna. Sunil Grover will be back but keep guessing how! Munda Shah Rukh Khan dances with his kudi Anushka Sharma in Punjab.