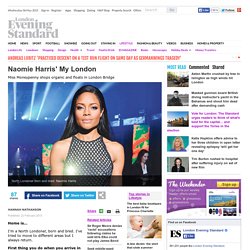 I’ve tried to move to different areas but I always return. First thing you do when you arrive in London? Go to Floatworks in London Bridge, where I lie in an enclosed pod floating on salt water in the dark. I’m obsessed with floating because it’s a bit like being back in the womb and also a good way of getting over jet lag. Best place for a first date? Bob Bob Ricard on Upper James Street. Best meal you’ve had? Sakura on Conduit Street. Building you’d like to be locked in overnight? The Science Museum, so I wouldn’t have to queue to play on all the gadgets. Best piece of advice you’ve been given? Dawn French paid for my first Equity card after we worked together on a corporate video when I was 17.

Earliest memory? Walking home from school along the streets of Finsbury Park. Building you’d most like to live in? A North London church. Which animal would you like to be? A cat — they always find the most comfortable and warmest spots. What do you collect? Daniel Craig hid in flotation tank. 24 October 2012 The British actor reprises the role of suave spy James Bond for a third time in the new movie. 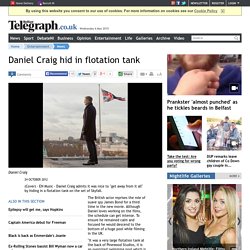 Although Daniel loves working on the films, the schedule can get intense. To ensure he remained calm and focused he would descend to the bottom of a huge pool while filming in the UK. "It was a very large flotation tank at the back of Pinewood Studios, it is an oversized swimming pool which is about 30ft deep," he explained to a UK TV show. "We had to spend a lot of time filming in there and it is very nice to just find a little dark corner and stick the respirator on and get away from it all.

Skyfall sees Daniel perform a series of daring stunts. "If it says in the script that I have to take my shirt off then vanity kicks in," he laughed. . © Cover Media COMMENT RULES: Comments that are judged to be defamatory, abusive or in bad taste are not acceptable and contributors who consistently fall below certain criteria will be permanently blacklisted. Inbetweeners Star Greg Davies: 'It's Hard To Make Collaborative Comedy Work' Greg Davies is being appealingly reticent about explaining how he made the leap into comedy. 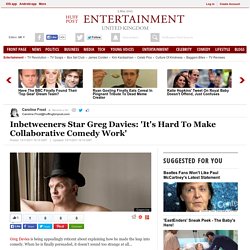 When he is finally persuaded, it doesn't sound too strange at all... "I got a floatation tank experience as a present, and after I went in it, I couldn't shake the feeling that I wasn't doing what I should be doing with my life. Apparently, this kind of floatation epiphany is quite common. " Davies had harboured a long-time dream to be funny for a living. He believes being a school teacher for many years, as well as a "pathetic show-off" to boot apparently, gave him a bit of a head-start once he searched for 'Comedy Courses' on the web and found that such things actually existed: "When I first started gigging, I think I might have come across initially as accomplished, for no other reason than I was used to standing up in front of people, and a difficult audience (teenage children) at that.

Naomie Harris' My London - ES Magazine. Bio: Lennon Kicked Heroin Habit By 'Floating' Aug. 15, 1988 2:10 AM ET NEW YORK (AP) _ John Lennon kicked a heroin habit with the help of a sensory-deprivation tank and felt as healthy as he'd ever felt in the weeks before his murder, according to a new biography. 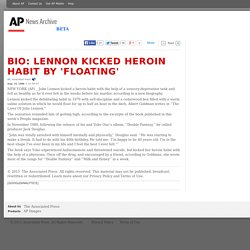 Lennon kicked the debilitating habit in 1979 with self-discipline and a cedarwood box filled with a warm saline solution in which he would float for up to half an hour in the dark, Albert Goldman writes in ''The Lives Of John Lennon.'' The sensation reminded him of getting high, according to the excerpts of the book published in this week's People magazine.

In November 1980, following the release of his and Yoko Ono's album, ''Double Fantasy,'' he called producer Jack Douglas. ''John was totally satisfied with himself mentally and physically,'' Douglas said. The book says Yoko experienced hallucinations and threatened suicide, but kicked her heroin habit with the help of a physician. Water way to go for Wayne - mirror Administrator. The secret behind Wayne Rooney's great form has been revealed - the England ace has been spending 10 hours a week in a flotation tank. 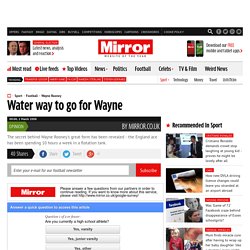 Rooney has enjoyed some of the best form of his career of late, scoring 12 goals in 26 appearances for Manchester United this term. Previously the 22-year-old was suffering from a string of injuries and had been struggling to find his form for club and country. But Roo has been setting the Premier League alight recently and friends reckon the flotation tank is the key. The £4,000 egg-shaped water pod was installed in Rooney's £1million mansion in Prestbury, Cheshire, at the request of his fiancee Coleen McLoughlin. And now the striker is reaping the rewards.